Time to tell the truth: I'm not someone who's into scary stuff. Halloween is fun because of the candy, all the ghouls and ghosts and zombies I can do without. So I really had to power through this episode because even though for more hard core fans of horror this was probably ridiculously mild, there were some genuinely scary moments for me.

Now that I've disclosed that I'm a scaredy cat, on to the review! Gene opens the episode with the not at all accurate origins of Halloween and we also find out that Bob's ears are clogged and Tina has to dissect a fetal pig at school. But the pig isn't the most important thing going on with Tina at the moment; she's trying to get an invite to Tammy's hay ride party where bumping pumpkins (AKA kissing) will be the main attraction. Tina hopes to see Jimmy Jr. in overalls. Without a shirt. 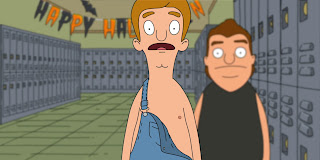 But before she can engage in any hay ride hanky panky she's got to get through the pig dissections. When the pigs are handed out all the other kids make fun of her for having an ugly pig. Trying to fit in so she can go on the hay ride, Tina joins in, cracking jokes about her dead pig.

And then the pig opens an eye. And I make a weird little screeching noise in fright.

It turns out you really shouldn't speak ill of the dead, because if you do you're going to get haunted. Tina wakes up from nightmares starring her ugly pig and she's freaked out enough to crawl into bed with Louise and attract the attention of Gene, who's enjoying a midnight charcuterie. Turns out Louise has a personal library dealing with the occult and she figures out that Tina's being haunted by a demon that possesses animals that have been wronged. Like when Tina made fun of her dead pig.

In order to get rid of the demon they need to put the dissected pig back together again from the parts in the dumpster (gross!), make an offering of Tina's blood (gross!!) and then bury the pig (that's okay). During this ritual we also find out that Louise is a bit squeamish around blood, but that doesn't stop Tina from burying the pig and, hopefully, stop the haunting.

With their troubles seemingly, and literally, dead and buried, the kids turn their attention to more important matters:their costumes for trick or treating. Louise cleverly goes as the Bjorn Identity, Gene as Fiona Applesauce and Tina as a sleep deprived young teen. 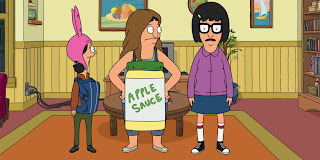 Tina goes on the hay ride and then promptly falls asleep, and we're transported into her dream, where the fetal pig is still haunting her but she's also conjured up Dream Louise and Dream Gene to help. 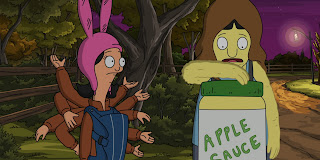 The trio end up trapping the pig and Tina's subconscious clues her in to what's really been going on: she isn't being haunted by a demon, she feels guilty for insulting her pig. She apologizes in her dream and when she wakes up she doesn't go along with Tammy and the rest of the group making fun of the hay ride, sacrificing popularity for doing what's right. She gets rewarded for her new outlook with a kiss from Jimmy Jr. Win for Tina! 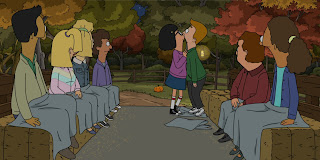 The elder Belchers are experiencing their own horror, but not of the supernatural kind. It turns out that Bob's ears are clogged because they're full of wax. This is discovered when a big ball of the stuff pops out of his ear while he's using Linda's method of ear unclogging. There's more in his other ear but Bob doesn't let Linda get close enough with her ear suction device to get it out. So Bob's ear is full of wax, hair and juicy secrets and he's fine with that.

Until he isn't. Mort has an ear scope and when Linda shows Bob a picture of all the build-up in there he reverses course and agrees to her extraction plan. Things turn weirdly sexual and this episode is making me very uncomfortable in a lot of different ways. The wax finally pops out and lands right on the kids' Halloween candy and Gene thinks it's a stray treat and I was glad the episode ended when it did.

Favorite quote: "Oh nipple, I mean nothing." Tina, of course.

Favorite blink and you'll miss it moment: When Bob, Linda and Teddy are talking about Bob's ear wax the scene cuts to a customer in the restaurant who thanks them for not getting the wax out right at that moment.

Biggest scare: When that pig opened its eye. What is this, American Horror Story?


Anyone else got a little scared during this episode, or am I just a big wimp? Comment below!