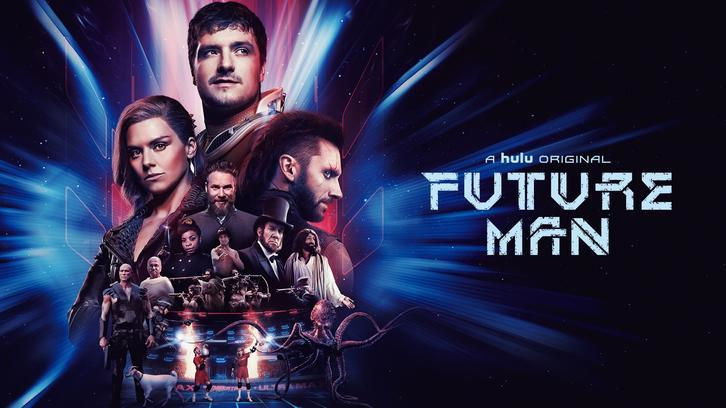 Josh Futturman feels stuck in his dead-end job as a janitor so all he really does is play Biotic Wars, an unbeatable videogame the rest of the world has given up on. But when Josh beats the game, mysterious visitors from the future appear: the world is in danger, and Josh is the only one who can save it.

In 1969, Josh, Tiger and Wolf launch a mission to infiltrate a fraternity party and prevent Dr. Kronish from contracting herpes—but the destruction they’ve left in their wake quickly catches up with them.

Tiger and Wolf decide it’s time for Dr. Kronish to die. Josh reluctantly agrees to help—but when he realizes he can’t go through with it, he finds himself caught in Tiger and Wolf’s sights instead.

In the wake of the disastrous attempt to assassinate Dr. Kronish, Tiger and Wolf kick Josh off the mission. When they realize their Time Travel Device (TTD) is compromised, Josh makes a deal: if he can get them more fuel, they’ll let him back on the team.

Tiger, Wolf and Josh work to unmask the Biotics undercover at the Kronish Labs Christmas party. Meanwhile, Josh grows closer to his coworker Jeri as she helps him avoid the obsessed policeman hot on Josh’s tail.

With just twenty-seven minutes before a bomb explodes in the head of their captured Biotic, Josh, Tiger, and Wolf hold a high-stakes interrogation in Josh’s bedroom while Josh’s unwitting parents host a holiday dinner party downstairs.

“Who wants to wait for things? The world could end.” #FutureMan EP @Sethrogen on why Hulu is dropping all of S1 on Nov. 14 #TCA17

The only way to know it’s a real laser is to look directly down the barrel. @FutureManOnHulu premieres Nov. 14. pic.twitter.com/V9970s8CGo

“Very wholesome,” Hutcherson laughs. “That’s not me. I went across to the dark side. It is really freeing.” He’s talking about his work on Future Man, Hulu’s new action-comedy series, the latest genre-riffing project from executive producers Seth Rogen and Evan Goldberg. Hutcherson plays Josh Futterman, a janitor at an STD research laboratory who spends lonely nights in his parents’ house earning high scores in his favorite video game, Cybergeddon. “He can clean and play video games, those are his two talents,” says the actor, joking but also not joking.

Fate beckons him to unlikely heroism. When Hutcherson achieves high honors in one Cybergeddon, he’s identified as the world-saving messiah by badass future warriors Tiger and Wolf (Eliza Coupe and Derek Wilson), who travel back to our time looking for a Messiah to prevent their apocalyptic future. It’s a twist taken straight out of The Last Starfighter, and Future Man boils over with nostalgia for the ’80s-era science fiction. “All of us grew up in the era of these amazing movies like Back to the Future and The Terminator,” explains Ariel Shaffir, who co-created the show with Kyle Hunter. “This was an opportunity to lean into the genre, but do it in a funnier way.”

But don’t call it a spoof: For all the fish-out-of-time-traveling-water comedy, Future Man has big world-building sci-fi ambitions.

A janitor by day/world-ranked gamer by night is tasked with preventing the extinction of humanity after mysterious visitors from the future proclaim him the key to defeating the imminent super-race invasion.