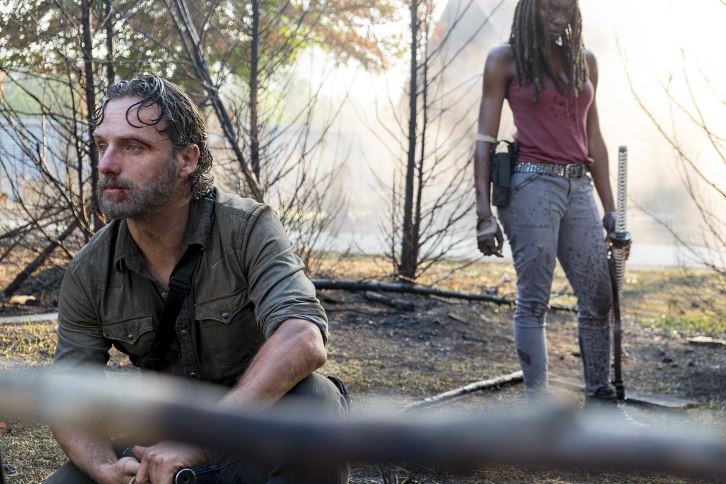 THR Interview
Sources tell THR that Andrew Lincoln has a deal to return for season nine as a regular. Given Lincoln's strong feelings about how Rick's story eventually having an endand wanting to pay that off, how real are your conversations about bringing an end to Rick's story?

It's really not something we're talking about now. But in the same respect, we're always keeping an eye on how everything ends. Just because you're telling a serialized story, you should have a good idea where you're going. As I've said in the past, there are so many different factors to it. We really do hope to play out the story as the comics are playing out and we want it to be satisfying. The only reason I bring that up is there's no imminent plans for that at all — and I'm just talking overall endings. But everything we do has a butterfly effect for the future so you're always thinking very far into the future about the stories. That's a pretty clinical answer to your question about how much do we think about the ending. But the ending comes up a lot only in as much as all these little pieces kick in in the future. Anything you do, you have to consider how it's going to affect the different conclusions that you have in mind. This stuff is so far ahead that it's a little bit just sort of planning for the future.


Source:
Read More on THR
EW Interview
You interspersed Carl’s death and Carl’s speech to Rick about putting away his gun again with Morgan about to kill Gavin when that kid Henry comes out of nowhere and does it first. Tell me about the thinking of linking those two events and cutting back and forth between them.

It’s the world that is versus the world that Carl wants. And very much we start, even Carl, in that interspersing in the world that is in that burnt out church in the state he’s in, which was so wonderfully put together by [director Greg Nicotero]. I was there for the church scene, and it was so heartbreaking and yet so beautiful. But the intercutting — which was built within the script — it was just a question of contrast. All the horrible stuff, and then into the dream of what the world could be.


Source:
Read More on EW
EW Interview
What do you think the significance is of Carl insisting on shooting himself instead of having Rick or Michonne do it?

I think it’s kind of showing Rick mercy, in a way, because Carl knew that this mistake was his fault, and he could have easily prevented it if he didn’t listen to Siddiq and try to pursue killing those walkers. He helped Siddiq honor his mom, and he saved his life. This is kind of Carl showing Rick mercy because he knew it was going to crush him, and this is kind of his way of saying that he’s sorry and trying to put him through as little grief as possible.


Source:
Read More on EW
THR Interview
Carl says goodbye to several characters — Rick, Michonne and Judith, among others. Is there one you wish you had a final scene with?


Source:
Read More on THR
EW Interview
How and when did showrunner Scott M. Gimple explain to you that this time jump from the comic that we first started seeing play out in the season premiere was actually Carl’s vision of what the future could be?

I found out when Scott was telling me that Carl was getting killed off. I was super juiced because I was in the flash-forwards, I guess to just to kind of throw off viewers. So one of my questions to him, was, “So how does that fit in?” He told me that it was Carl’s vision of what the future could be like, and I think it’s definitely possible. So if Rick actually listens to Carl, and really wants to pursue a better life for Judith, that’s what’s he’s going to have to do.


Source:
Read More on EW
EW Interview
Tell me your reaction when showrunner Scott M. Gimple first told you about this idea of taking the time jump from the comic books and instead turning it into Carl’s deathbed vision for the future?

I thought it was breathtaking. And it was interesting because at first in the first episode I was convinced it was maybe a double reality — one with Rick’s literally dying under the tree and another where everything is glorious. Scott took a look at me and he said, “No.” And I said, “Oh God.” And it just made me even more confused. So it’s Carl’s vision for the future? What does that mean? And then it clicked when he told me what was happening. It’s this iconic scene from the comics, but played very smartly.


Source:
Read More on EW
THR Interview
Lauren Cohan has signed on for the lead in an ABC pilot and does not yet have a deal to return for season nine. What can you say about a Walking Dead universe potentially without Maggie in it?

My goodness. That makes me terribly sad but at same time I'm absolutely thrilled because she's a friend and a good actress. But I don't know what that looks like.

Groups unite their forces and converge on the Hilltop; Aaron and Enid search for allies.