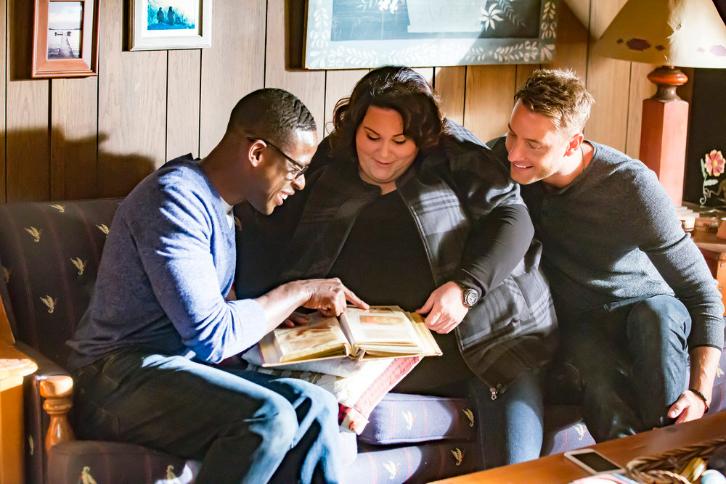 11/29/2016 (09:00PM - 10:00PM) (Tuesday) : Kate, Kevin and Randall head to their family's cabin to get away after their chaotic family Thanksgiving. A very angry Randall finds comfort and explanation from his father, Jack. Olivia speaks a harsh truth to Kate, which drives a wedge between Kate and Kevin. Rebecca and Jack struggle with what to do when 9-year-old Randall tells them that he's been looking for his birth parents.


Even Beth knew the secret, but at least she was trying to give Rebecca the chance to make it right.

Exactly. And William was following a kind of mandate. And honestly that’s how it should be. We’ve established by episode 8 here that Randall and his mother have this incredibly close bond, and they have both it present day as adults, and they had it when he was a younger boy. So it’s not that she’s been most in the wrong, it’s also that their relationship is so close that it’s such a betrayal.

Ending the episode in the past with the family all happy together, instead of in the present, with the Randall-Rebecca confrontation was unexpected. You’d expect it to be flipped.

In the script, the final scene of the show was the yarn scene at the table where Randall drops the yarn and dresses down his mother, and the little scene with young Randall telling his mother that he hoped all Thanksgivings would be like this happened before that. And it felt so beautiful and heartbreaking and everything to have that as the button to their break, so it ends both more hopeful, but also more heartbreaking. It was certainly less conventional… In a typical TV show — not that we’re doing avant-garde theatre here — but in a typical show, you would probably end on the big cliffhanger with him storming out and the single tear coming down Mandy’s eye. But there’s something more heartbreaking about seeing this secret that was kept and when they were beautiful and before all was broken, and ending on that.