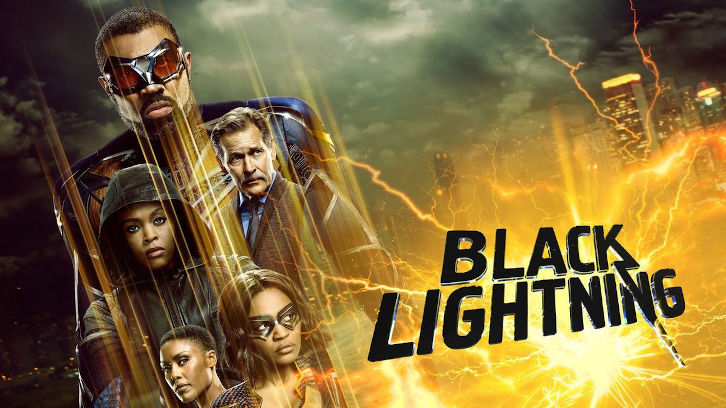 I liked the explanation of how Gravedigger got his name as well as the tidbit of American History that was included.

Yes, America still has some of the issues that existed when Tyson Sykes lived in America but, the fundamental issue that makes him the bad guy in this story is the fact that he will only take 'Yes' for an answer. Killing people who don't want to do things his way, is the tactic of a bad dictator.

The only issue I had with this segment was with the staging of Gravedigger's presentation of power. It didn't have the gravity of the rest of the episode for me.

It looks like Khalil's seasonal arc is going to end with him figuring out a way to live with Painkiller. I still like the way they've visualized his internal struggle. I think the only way the character has a chance of staying on the show is if Khalil wins that battle and the two learn to coexist. I think it's a great place for his story to have come to, as we approach the end of the season.

When Gravedigger was studying the video of the team that rescued Lynn the image for Black Lightning came up and it said “Tactical Proficiency” I had to laugh.

What we've seen of Black Lightning's battle plans there is no sense that his thinking like a chess player. In this episode, his plan making only considered what would happen if everyone did what he expected them to do.

That short sightedness is not, IMHO, an example of tactical proficiency. Hopefully, what we are seeing on screen is just the beginning of his thought process.

It all seemed moot though, because we didn't see him get a chance to evolve his plans before the Markovian army made their first move.

Speaking of off-screen activity, I really do hope that Black Lightning and Thunder had an opportunity to get the recruitment word out to others in Freeland than just Lala.

How typical is it for Lala to think only of his desires while the house burns down around him?

But what is he up to? After his last encounter with Lady Jane, I keep trying to figure out if his agenda is really as simple as killing Tobias. If Lala's motives are indeed that simple, do the writers have a grander purpose to his story?

Let us know what you think about Lala's story in the comments below.

I am enjoying watching Jennifer watch Brandon being volatile, self centered and single-minded quest to achieve his goals. It is a pretty nice way to highlight Jennifer's growth.

It's too bad her parents don't have a moment to absorb it and think 'now you know how we feel'. LOL

Jennifer is maturing. Unfortunately, she is still a teenager who believes she's invincible.

She has good reason to believe she's invincible, but that's a dangerous assumption to take into battle. (I paused the DVR to write this because having watched Gravedigger studying his opponent, I can see Jennifer's rude awakening on the horizon. I almost don't want to watch.)

And, as expected, the Markovians were prepared for Jennifer and she was taken out fairly quickly.

Personally, this is a lesson Jefferson needs to learn. 'Trust me and hide when I tell you to...because I said so' has never worked in the history of movies and television.

In addition, Jefferson is raising two warriors. He should be teaching them to think tactically by, at the very least, telling them why he's making the tactical decisions he's making.

Bombshell of the episode: The Pierces are related to Gravedigger!

I cannot believe that this revelation only exists to explain why Jefferson, Anissa and Jennifer are the only stable metas (without chemical aid). I'm wondering if I it will play into how Gravedigger is defeated.

I had really been hoping they'd get through the wedding before the call to battle happened.

This was a great 'lead in to battle' episode.

There were several themes touched on, in this episode, that I found quite interesting.

I'm looking forward to Jefferson being forced to face the realization that it is impossible to fight a war without killing the enemy.

The Gravedigger has become the monster he hates. By ignoring the Freeland metas right to choose, he is no better than the government he rails against. I'd like to hear his response to that statement.