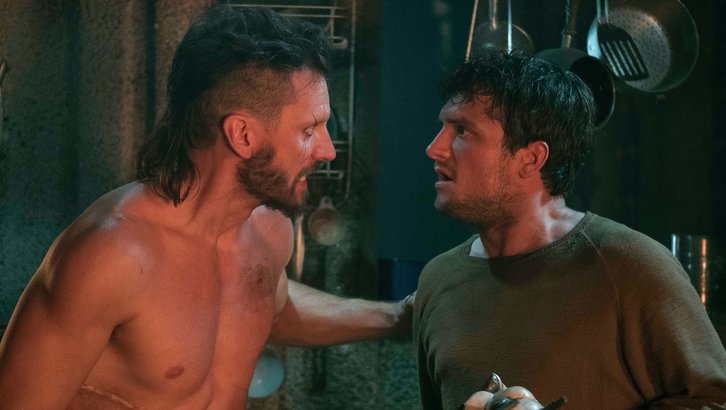 It’s the day of the MARS launch. Josh goes on a suicide mission to sneak into Stu’s upload machine to shut him down for good. But Stu discovers the plot and patches himself. Tiger betrays Stu and saves Josh just in time, sending Stu into a murderous rage.

Ty-­?Anne shares her story of becoming Achilles, starting as a child hungry for love Stu could never give, and ending in a mission with her ex-­?lover Torque to shut down Stu – from the inside. Josh believes he’s the key to stopping Stu once and for all.

Stu sends commandos to abduct Josh in the NAG – chaos and bloodshed ensue. Wolf realizes Stu is evil and seeks revenge, trying in vain to make Tiger see the truth. Josh and Wolf learn the identity of Achilles, the elusive leader of the Pointed Circle. Dr.

Stu introduces a depressed Tiger to his simulation – where anything can be reality, drawing them closer than ever before. Stu tells Tiger the truth: he’s not taking everyone to Mars, he’s uploading them to the digital realm, where they’ll exist forever.

Episode 2.07 - Homicide Life in the Mons

Wolf, ignoring warnings about the Pointed Circle, brings Josh to live outside his Clusternest. Tiger reaches a dead end in her quest for the TTD. Wolf puts together the truth about Tiger – she’s a Biotic – and rejects her, confirming her worst fears.

Tiger uses Stu’s fondness for her to help her track down Athena. Meanwhile, Josh is now a “Smasher” remanded to a labor camp, where the Pointed Circle comes after him. Wolf, vowing to improve the NAG, faces off against Supreme Overlord Vice.

Josh, Tiger, and Wolf go on a mission to find their TTD and take down the Pointed Circle. Josh discovers he is not the only Josh in 2162, but Athena escapes with the TTD. Tiger vows to hunt her down – alone. A wedge between Tiger and Wolf grows.

As Tiger gets to know her doppelganger Ty-­?Anne, Wolf acclimates to the NAG, and Josh wanders the desert. Josh is brought to the NAG and remanded to indentured servitude as a technology smasher. Tiger sneaks into the NAG and wants out of this timeline.

Wolf is mistaken for Torque (the Wolf in this timeline) and he goes with it – learning about the NAG, and its 6-­?parent families and hatred of technology. Wolf tries to escape but the appeal of this new, strange world makes it hard for him to leave.

Tiger and Wolf arrive in the future they created. Tiger is not welcome in The NAG (The New Above Ground) so she heads to The Mons where she learns humanity is moving to Mars, her DNA created the cure, and Stu Camillo is alive and well in hologram form.

Check out the teaser trailer for the second season of Future Man, Hulu's hit comedy series from the guys who brought you Sausage Party! Season 2 premieres Friday, January 11, only on Hulu.

Season two picks up in 2162, and Josh, Wolf, and Tiger learn that their season one mission to stop the cure from getting out didn't work. In this timeline, Stu Camillo is now in power, having created the cure, and launched a plan to relocate humanity to Mars. A shadowy organization called the Pointed Circle seeks to recruit Josh to take Stu down - but are they the good guys, or is Stu? As Wolf quickly acclimates to the strange customs of this time, Tiger struggles with her Biotic identity and searches for an escape. Josh unites the team in an epic plan to save the world, but their time-traveling catches up to them, and they must reckon with their choices and what to do next.

Episode 2.01 - Countdown To A Prologue