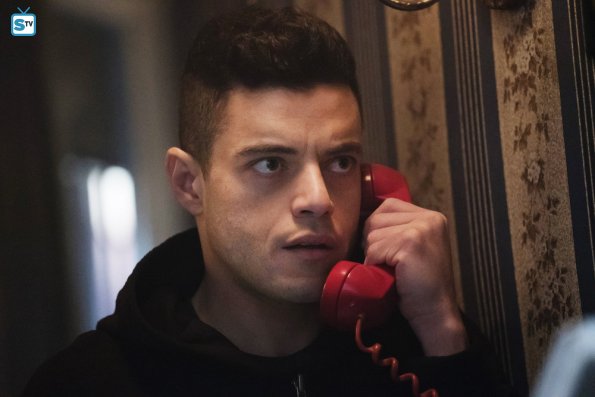 
The dinner scene definitely stands out as a major moment for Angela, culminating in Price offering up two heads on a silver platter. What do you remember about approaching this scene?

I loved this sequence. I remember [creator Sam Esmail] and I were talking for a long time about that entry. We talked about that moment being very full. She's kind of brainwashed herself at that point before she goes, and she's living in this very weird dream. There's an element of… it's a fine line between how she's being seduced by Price. I think in her mind, she's definitely dressed differently, and she had a different idea of what that dinner was going to be like. I think she thought that maybe he's attracted to her. Not necessarily that she's attracted to him in that way, but there is this fine line that we're playing with on both sides.

Even the music comes to a halt when the camera pans around, and both the viewer and Angela sees that this isn't a one-on-one date with Price.

Right. Sam wanted to capture that moment of Angela's idea completely being shattered, what this would be like. That's why there's something very dangerous about the dynamic between Angela and Price. He's extremely unpredictable. She's still trying to figure him out. There's that push-pull game in the scene prior, when she walks into his office and she stands up for herself, after she's regained confidence in kind of reprogramming herself. She says: "Hey, I don't think that's a good decision. We should go with Bloomberg, and this is the reason why." And then he stops her, because he knows she's right, but it's this test. It's this push-pull, back and forth. He offers up this dinner that she never saw coming, and she probably questioned it a lot, and then inevitably went. She's very seduced by what he has. She's very seduced by what he can offer her in terms of power and respect. He believes in her. That makes her even more aggressive in terms of wanting to have what he has, or wanting to be influenced by him.

At the same time, the dinner is very frightening. I'll never forget it: I almost started laughing, because my entire body changed. I got the chills. It's when he comes up to my ear. It was terrifying. Terrifying! I keep using this word so many times, but there's something so seductive. At the same time, I was in complete fear of his ownership over me, of the fact that he knows that I'm probably going to make this decision, and Angela has to put up this front of not trusting him. There's this moral dilemma, too. She just spent this dinner with these gentlemen who she actually likes. They're normal, and he's talked about their accomplishments…

Elliot befriends Ray, hoping he can finally delete Mr. Robot; Dom makes a discovery; Darlene considers whether the FBI or Dark Army are the bigger threat.