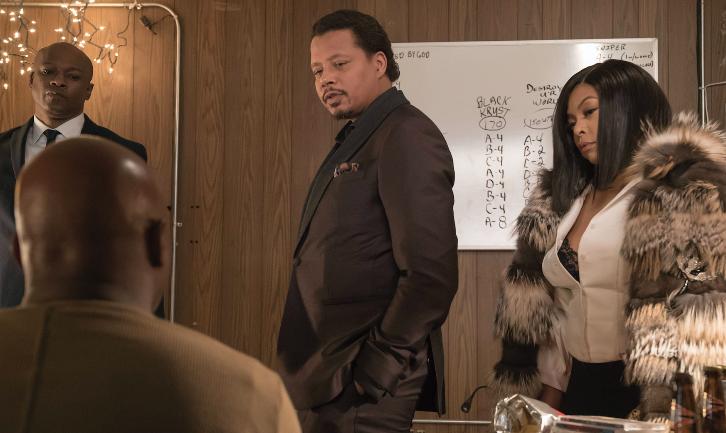 
2 New Promos - War For The Empire & You Love Me, You Always Will Love Me


COOKIE AND LUCIOUS CLASH IN THEIR BIGGEST BATTLE YET ON THE ALL-NEW SPRING PREMIERE OF "EMPIRE" WEDNESDAY, MARCH 22, ON FOX

After launching a deadly missile at Angelo, Lucious announces his new music project, Inferno, and puts everyone on notice - especially Cookie, who then vows to knock him off his throne for good. The two engage in an epic clash - fueled by a history of love, loyalty and betrayal. Meanwhile, Jamal befriends musician Tory Ash (guest star Rumer Willis) during his stay in rehab, Andre continues with his plan to take over EMPIRE, and Hakeem and Tiana battle Nessa for a spot in the music showcase in the all-new "Sound & Fury" spring premiere episode of EMPIRE airing Wednesday, March 22 (9:00-10:00 PM ET/PT) on FOX. (EMP-310) (TV-14 D, L, S, V)


New Promo - What Is Love


One of the most emotional moments in the episode had to be that goodbye between Andre and Rhonda. What made Andre OK to finally let her go?

I think Andre was grappling with trying to move forward. He meets Nessa, who is attracted to his Machiavellian ways and I feel this was the right moment for him to let go of Rhonda specifically so then he can totally venge her death so to speak. She tells him, "Make sure that whoever did this to me will pay for it," and I think it's all encompassed in one moment. It's a very crushing scene. When I was directing it, I wanted it to feel epic and movie-like. We're saying goodbye to a character that is a fragment of his mind and with that being said, we'll see what happens with him and Nessa, and what Andre's emotional state will be without Rhonda's ghost haunting him.

Going back to the scene with Rhonda, is that the last we'll see of Kaitlin Doubleday on the show?

I think right now we're saying goodbye to Rhonda. However, again, Andre's mind is not all there so she could make an appearance again at some point. We don't know. We'll see where the story goes but for right now, we've definitely said goodbye to her.

Source:
Read More on THR
DEADLINE: But you have seen some big ratings drops this year. What do you think of that?

DANIELS: What do you want me to do? Tell you no, I’m happy about it? No, I ain’t happy about it, of course not. I would be lying to you to say otherwise, but I can only tell you that I’m happy that a lot of people are still seeing our show.

Source:
Read More on Deadline
Why did Cookie give him the pills that she threw down the sink?

It’s a few things. First, going through withdrawals is extremely painful and dangerous and something that you just have to go and get somewhere to get clean — that couldn’t happen right then in there since she can’t call 911 because it would be all over the tabloids, and she doesn’t want to see her son suffer. It’s very painful withdrawals, so I think that’s part of it. Secondly, she has to compete the show or else his career would have been over, had he not performed, and she knew that. So she figured, might as well give it to him — she didn’t want to see her son in pain, and she didn’t want to see his career ruined — and smartly enough, right after, she gets his ass to rehab.