THE NCIS TEAM INVESTIGATES A PERSONAL CASE FOR PRIDE WHEN A VICTIM IS IDENTIFIED AS A MAN HE ONCE MENTORED, ON THE SERIES PREMIERE OF “NCIS: NEW ORLEANS,” TUESDAY, SEPT. 23

Editor’s note: This storyline has been updated with more specific information. 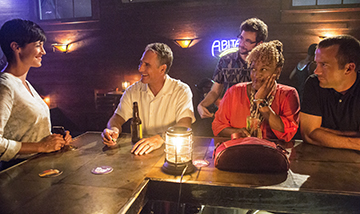 “Musician Heal Thyself” – A case turns personal for Pride when the body of a Petty Officer is identified as a former gang member he once mentored. Meanwhile, Brody continues her search for the perfect place to call home in New Orleans, on the series premiere of NCIS: NEW ORLEANS, Tuesday, Sept. 23 (9:00-10:01, ET/PT), on the CBS Television Network. David McCallum guest stars as Doctor Donald “Ducky” Mallard; Steven Weber guest stars as Councilman Douglas Hamilton; and James McDaniel guest stars as Papa Parks.

NCIS: NEW ORLEANS is a drama about the local field office that investigates criminal cases affecting military personnel in the Big Easy, a city known for its music, entertainment and decadence. Leading the team is Special Agent Dwayne, a.k.a. “King,” a native of New Orleans who is driven by his need to do what is right. Working with Pride is Special Agent Christopher LaSalle, who plays hard but works harder; and Special Agent Meredith “Merri” Brody, a charismatic and tough interrogator who transferred from the Great Lakes office in search of a fresh start. Supporting them is coroner Dr. Loretta Wade, who is as eccentric as she is smart. This colorful city that harbors a dark side is a magnet for service personnel on leave, and when overindulgence is followed by trouble, Pride’s team is at its best.