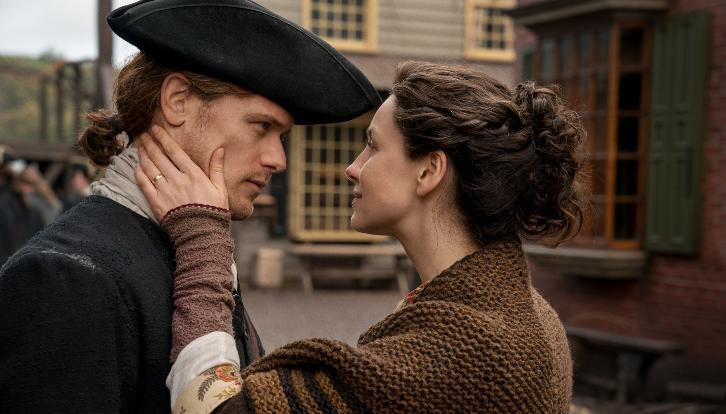 Claire and Jamie's life in the New World is about to get complicated. #Outlander pic.twitter.com/su0OshuFxW

#Outlander is bringing the heat to a new continent! ????Get details on the thrilling adventure and romance to come as Jamie and Claire head to America in season 4 of @Outlander_STARZ: https://t.co/exOo7sKJhv pic.twitter.com/Se911Pf1iH

Get your hands on this exclusive #Outlander cover with @caitrionambalfe and @SamHeughan! Available exclusively at @BNBuzz starting 10/9 and online here: https://t.co/WX1r0NQnd3 pic.twitter.com/RK2VsCiMVN

Season Four of "Outlander" continues the story of time-traveling 20th century doctor Claire Fraser (Caitriona Balfe) and her 18th century Highlander husband Jamie Fraser (Sam Heughan), as they try to make a home for themselves in colonial America. As Claire and Jamie build their lives together in the rough and dangerous back country of North Carolina, they must negotiate a tenuous loyalty to the current British ruling class, despite Claire's knowledge of the American Revolution to come. Along the way, the Frasers cross paths with notorious pirate and smuggler Stephen Bonnet (Ed Speleers) in a fateful meeting that will come back to haunt the Fraser family. Meanwhile in the 20th century, things are complicated between Brianna Randall (Sophie Skelton), Claire and Jamie's daughter, and Roger Wakefield (Richard Rankin), the historian who helped Claire search for Jamie in the past. But when Roger and Brianna search for proof that Brianna's parents reunited in the 18th century, a shocking discovery makes both of them consider following in Claire's footsteps.

Deadline Season 3 Finale Post-Mortem Interview
DEADLINE: On that topic of not going back, early in Season 3, Tobias Menzies’ Frank Randall character, the slightly nicer one of his two roles on the show, died in a car crash. Is that really the end for the 2015 Golden Globes Best Supporting Actor nominee on Outlander or is Tobias coming back somehow for Season 4?

MOORE: (laughs) I think there’s a strong possibility we’re going to do that. We’ve been talking about doing some way of getting Tobias back in the show in Season 4, at least for some flashbacks, or some other kinds of sequences. So nothing’s been committed yet, but yeah that’s on the table.


Source:
Read More on Deadline
THR Season 3 Finale Post-Mortem Interview
What does that mean to both to portray a different kind of immigrant story?

Balfe: It's interesting because I left Ireland when I was 18. I immigrated to America when I was 21. To be able to look at the country that was my home for about 13 years in this historical context, it's not something I would have been terribly familiar with, the history of America, but right now it's especially interesting to look at how this nation of immigrants created where we are today and to be able to learn more about it.


Source:
Read More on THR
EW Season 3 Finale Post-Mortem Interview
ENTERTAINMENT WEEKLY: Let’s start with those underwater scenes. How did you shoot those? Did you have to hold your breath forever?

CAITRIONA BALFE: We had this really cool water tank at the back of the Cape Town Studios in South Africa. Sam and I had done some underwater scuba training so we could stay underwater, and they would just come and feed us oxygen every 30, 40 seconds.

SAM HEUGHAN: She was very good at that. She was like a mermaid. She has done scuba diving before. I’ve never done it.