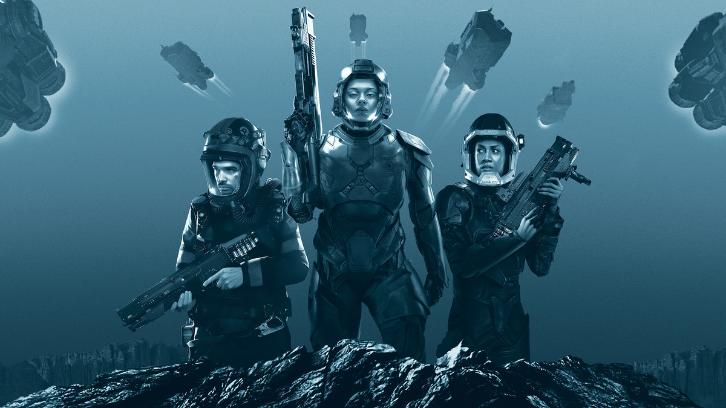 First Look Featurette
Thanks to MatMaggi for the heads up. Sorry for the technical issues before.

This exclusive Season 3 clip just dropped at @WonderCon. Looks like Amos and Prax will be picking up where we left them...#TheExpanse premieres April 11 at 9/8c on @SYFY. pic.twitter.com/hN0su2DNey

Promotional Poster
Thanks to MatMaggi for the heads up.

Teaser Promo - Are You Ready For War?

Trailer
Thanks to Jaydan for the heads up.

Character Teasers - Bobbie, Avasarala, & Holden
Thanks to MatMaggi for the heads up.

Get your vac suits ready. #TheExpanse is BACK April 11 at 9/8c on @SYFY. pic.twitter.com/ugYnc4Mkad

Humanity is ready to tear itself apart. Join the fight April 11 on @SYFY. #TheExpanse pic.twitter.com/fFoFxCG0l6

You thought last season was awesome, @WIRED? Just wait for what's next.#TheExpanse is back 4/11 on @SYFY. pic.twitter.com/KxwRt9IcTy

Season 3 of SYFY's THE EXPANSE will premiere Wednesday, April 11 at 9/8c. Picking up immediately following the emotional and suspenseful second season finale, the 13-episode third season finds Earth, Mars and The Belt at war, with each competing entity vying for control. Now, more than ever, the mission to unlock the secret of the protomolecule reaches an all-time high and every decision made could jeopardize the survival of the solar system.

THE EXPANSE unfolds across a colonized galaxy 200 years in the future, when two strangers become unwittingly swept up in a vast conspiracy. Based on the New York Times bestselling book series collectively known as "The Expanse," written by Daniel Abraham and Ty Franck (under the pen name James S. A. Corey), the series stars Steven Strait, Shohreh Aghdashloo, Dominique Tipper, Cas Anvar, Wes Chatham and Frankie Adams. This season also introduces Elizabeth Mitchell and David Strathairn as recurring guest stars.