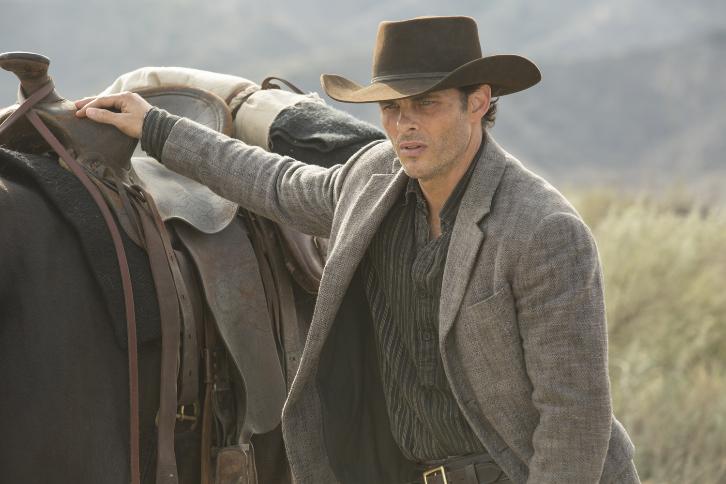 
Dolores' evolution is reflected further in her costume change in this episode, as she suits up for the wagon heist. It's almost like she's playing as a new avatar. Does the costume change signal a shift for the character?

I think it definitely does. I think the farther out you take Dolores from Sweetwater, obviously the more she's not on her loop, and then the more she would probably be improvising and creating her own reality — which is all just my theories, of course. (Laughs.) I think absolutely that signifies something, and I think her going into that quote-unquote "Terminator" mode foreshadows so much. I think we're going to keep figuring out exactly what that is and what's going on. And, we've also now seen another Dolores, and the question is now if she's talking to herself or if there's another actual Dolores, which raises all kinds of new questions.

Could there be multiple versions of the same host?

Exactly. So many questions are being brought up in [episode] five, which we're just going to continue to explore.

Joy: I was on set the whole time for that. For me, I get a little shy around this stuff sometimes. It’s very strange, you’re looking at the actors coming in for these roles and you have to do a wardrobe test. In this case you’re not testing clothing so much, it’s what we call the “furry bikini” — they put on a merkin and you look at the way their [body] paint is laid out. I think people imagine when something is sexy on screen that it might be sexy on the day, but it’s not. It’s a bunch of people putting on robes and going to craft services and staying warm, and then doing their thing. But the actors were incredible, and we had a sex consultant on set to make sure everybody felt comfortable and to make sure the scenes were looking sexy enough, and I think that helped.

We have this scene between Dr. Ford and the Man in Black, which was cool to have an excuse to put Anthony Hopkins and Ed Harris together.

Nolan: It’s more about establishing that these two know each other. One thing I really liked about Tom Hanks’ character in Saving Private Ryan is he’s a solider and his men all speculate about who he is on the outside world. The idea [in Westworld is that] this is cosplay. It’s fantasy. You’re coming to this place putting on the mantel of a character in this world and we’re seeding the audience pieces of who Ed Harris’ character really is. He has has some longstanding business relationship with Ford and he’s clearly involved on some level with the park. We wanted the audience to do that math on what that relationship means and what their connection to one another is. And we love the idea of Ford literally intruding on the Man in Black’s gameplay and sitting down with him. It’s too delicious an opportunity to pass up.

Joy: It’s also interesting, because within the tech world, Ford is like some kind of god in that domain. To an expert player like the Man in Black, you would think he’s going to be blown away by meeting him. But the nature of their relationship seem more like equal footing. The Man in Black seems much more impressed by whoever Ford’s partner is from long ago. What’s also fun is that we’ve talked about how there are ways to make sure there isn’t guest-on-guest violence in the park. And here [with Teddy grabbing the Man in Black’s knife] we see the hosts’ Good Samaritan reflex kicking in.