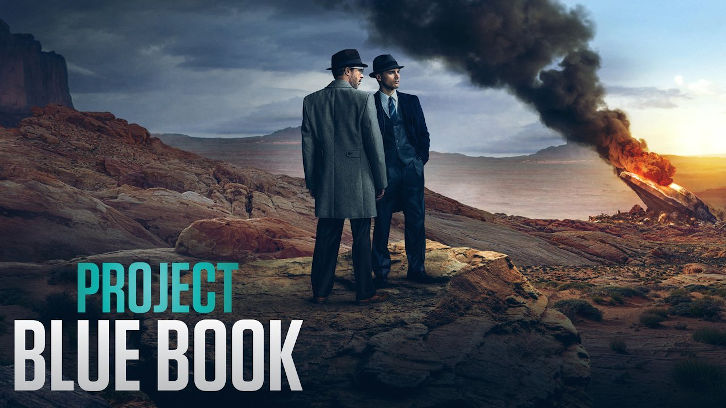 Project Blue Book “Curse of the Skinwalker” was written by Harley Peyton and directed by Norma Bailey. This episode takes us back into creepy government conspiracy/experimentation territory with some good old-fashioned woodsy horror thrown into the mix. The episode also features one of my favorite Canadian actors, Christopher Heyerdahl (Edmund) as the mysterious neighbor. We also find Susie (Ksenia Solo) getting into hot water and Mimi (Laura Mennell) getting sidelined. I’m still finding the show isn’t doing as well finding the balance between storylines this season. 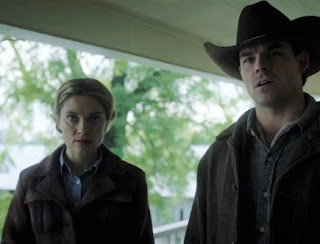 Like any good horror show, the episode opens with a creepy kid – Billy (Liam Hughes) – who has taken to sleep walking… in the woods. Parents, Rex (Jesse Hutch) and Laura (Spencer Grammer) follow him and they all end up seeing blue lights and what appears to be an alien.

Hynek (Aidan Gillen) and Quinn (Michael Malarkey) are on the case. We get lots of great scenes between these two and it seems like the car setting has settled down to be a staple of the show. Hynek points out that the blue lights can be explained as natural phenomenon – and we find out later he’s right about that. Quinn, hilariously, points out that the alien sighting is the headline!

Edmund almost hits them with his car and tries to warn them off. There are creatures in the woods… 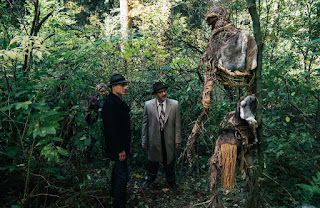 Hynek and Quinn get a rather chilly reception at the farmhouse and notice that there are bars on the windows and door. Billy stares at them creepily from the house as they head into the woods with Rex and Laura, who are actually happy to see them. They tell them that the bars were there when they moved in. They take them to the site where they saw the alien. Quinn sees some black goo bubbling out of the earth – which is never really explained. They find a scarecrow like figure in the woods which explains the “alien” that they saw. Laura tells them that Edmond is not a friendly neighbor and that the community generally doesn’t like outsiders. We learn later that they can’t move because it would bankrupt them. They are interrupted by the dog, which was locked in the house, showing up. Returning to the house, they find Billy hiding in the closet, and he tells them that the alien was there. 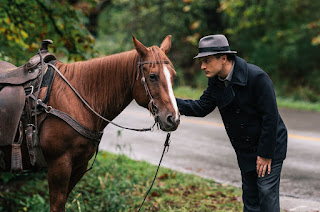 Hynek remarks on a sweet smell he detected in the house. Rex is convinced Edmond was in the house and takes his horse to go and see his neighbor. Quinn wants to stay out of it because it’s not their business, but Hynek insists that it’s related! The two find Rex’s horse abandoned on the road and head into the woods to find him.

The two separate and Quinn looks woozy for a moment. Hynek is chased by a black wolf and falls down a hill. Quinn finds more scarecrow aliens and ends up upside down in a trap. It’s Edmund and he cuts him down. Rex shows up and is going to shoot Edmund, but he tells them that he’s trying to protect the Chapmans from the curse that was put on their land by the Navajos – it’s why they paid so little for their land. He tells them that when a medicine man becomes a skinwalker, he can change into the form of an animal, but he has to do something evil in order to be able to transform. He tells Rex that it’s too late if they’ve entered his home. They’ll come back and kill them! Rex warns Edmund off, and Quinn tells him to keep away for everyone’s safety. 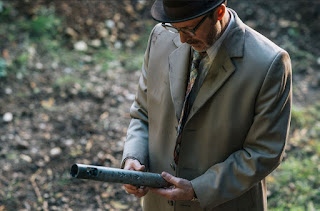 Hynek meanwhile has found some kind of cylinder. He has no idea what it is, but Quinn does and they go to the local Air Force base. It’s an experimental flare. They meet with a scientist (JoBeth Williams) who tells them that she’s a private contractor using the flares for research.

Both Quinn and Hynek feel like something is off about her. On the way back to the ranch, they discuss a hum they’ve been hearing and then there is apparently an earthquake! Quinn can smell the sweet smell coming out of a crack left in the ground. An electric pole has been knocked down. They have no choice but to continue to the ranch.

Quinn has a moment with Laura and Rex thanks Hynek for all they’ve done. Meanwhile, Billy is reading and then his Jack-in-the-box starts playing music. Hynek comes into Billy’s room and offers to fix the toy which appears to be broken, but Billy insists that the music is the only thing that keeps the alien away. 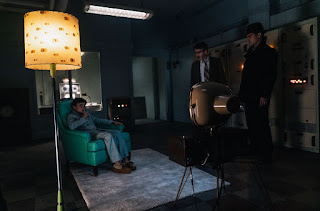 Edmund turns up at the ranch, saying he tracked the skinwalker there, and Billy is missing. They find a tunnel in a hidden door in the cupboard where Billy had been hiding before. Hynek and Quinn follow the tunnel and experience another earthquake. Quinn seems to see the skinwalker and then Hynek comes back for him. He’s found a ladder and when they climb up, they find Billy watching tv… in a lab!

The Scientist doesn’t want to explain, so Quinn threatens to bring in the Generals. She tells them that they are studying the relationship between tremors and alien sightings. The tremors are fabricated and release gas – causing the blue lights and presumably hallucinations. Hynek is not impressed that they are using the Chapmans as unwitting lab rats! The woman promises to apologize to the Chapmans, but Hynek and Quinn insist on compensation and threaten to reveal her entire set up to their contacts at major papers! She caves.

The Chapmans are ecstatic and happy – and ready to move. In the car, we get another great scene between Hynek and Quinn – Malarkey and Gillen really do have great chemistry. Quinn confirms that they don’t really have contacts at the Times – but he’s also glad not to be spending another night in the Chapman house! The last we see of the house, the Scientist is now posing as a real estate agent, selling the ranch to another unsuspecting family. 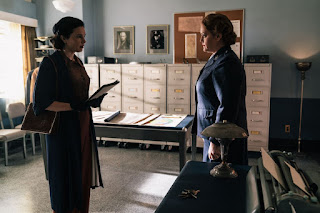 Neither Mimi nor Susie have a good time in this episode. Mimi finds herself thrown off Project Blue Book when she arrives at the base and Faye (Jill Morrison) apologetically won’t give her access on the orders of General Valentine (Michael Harney). She hugs Mimi and does get Mimi’s own papers. Trying to find solace with her UFO group, Evan (Keir O’Donnell) tells her that after the Robertson Panel, she is no longer welcome there either. She’s lost her access to government information and now poses a risk to the group. He tells her to be careful. 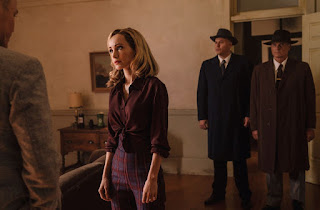 Susie meanwhile is caught by Harding (Neal McDonough) in the middle of cleaning up Rizzuto’s apartment. He’s there because Rizzuto was supposed to meet with him. Rookie mistake Susie! There is no way that he’s buying her as Rizzuto’s girlfriend! And now she is dangerously close to being exposed. 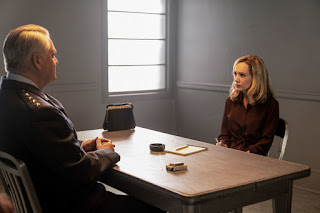 Harding takes Susie into custody, and Valentine also interrogates her – gently. He tells her that she’s only there because they need her help. He asks for details – how did she meet Rizzuto? Who can vouch for seeing them together? She coolly covers that they’d only been going out a very short time… They let her go as they have nothing to hold her on, but they are going to have her followed! No doubt, right to Quinn’s door!!

This was an interesting episode. I like how they keep the cases all a little different. I’ll be sad if Mimi is now sidelined, and it definitely looks like Susie’s story is building to a climax. Will she confess all to Quinn and throw herself on his mercy? Ask for his help in getting her daughter? What did you think of the episode? Let me know your thoughts in the comments below!