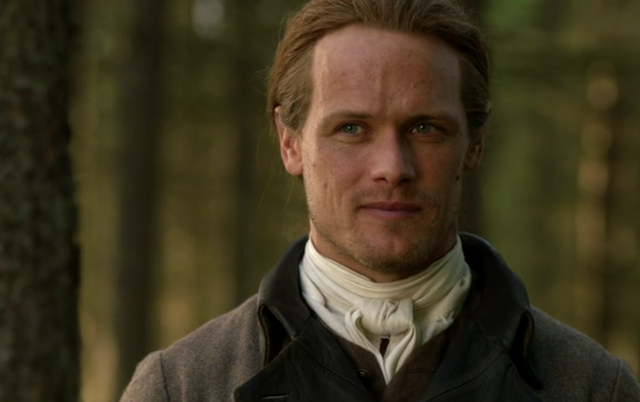 From the very first moment Outlander hit the airwaves Sam Heughan has been a breakout hit. It is his combination of gifted talent and heartfelt sincerity that has endeared him to the masses. Coming into the fifth season of the hit show, Outlander, Heughan is going as strong as ever in his performance of the brave and loyal Jamie Fraser. In The Fiery Cross (5x1), Heughan got to highlight some of the best characteristics of the character as a husband, father, grandfather, friend, and leader. In every aspect, Heughan shone as he portrayed Jamie standing fierce and strong in defense of his family and friends. His powerful and heartfelt performance is what earned him the title of SpoilerTV’s Readers’ Choice Performer of February. 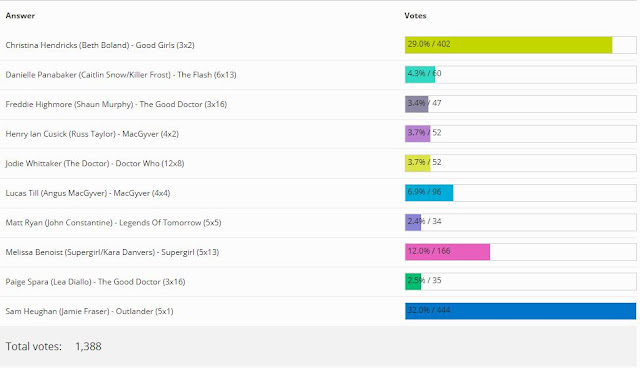 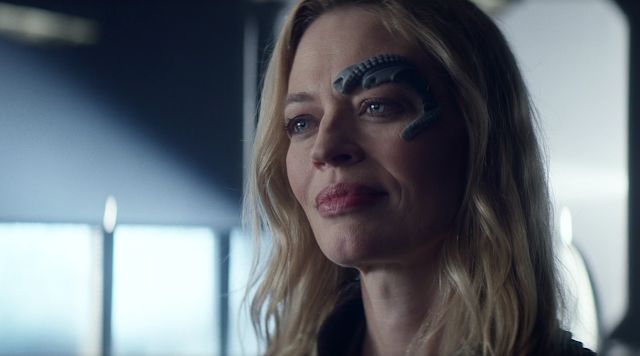 At the height of the popularity of Star Trek series on the air, each show had that one unique character that caught the attention of fans. For Star Trek: Voyager that character was Seven of Nine who came aboard in the fourth season and portrayed by Jeri Ryan. Seven of Nine was a Borg drone who was assimilated as a six-year-old human girl, is liberated from the collective and joins the Voyager crew. With the help of the ship’s Captain and others, Seven slowly begins to regain her humanity and experience true emotions. Now over twenty years later Ryan brings Seven of Nine back to life in a passionate and driven performance in the Star Trek: Picard episode Stardust City Rag (1x5). This is a different Seven, now a Ranger and a driven woman, a woman on a mission that involves a very human emotion, revenge. From the moment she appears on screen until her very dramatic exit, the episode belongs to Ryan as she returns to the Star Trek franchise. Older fans cheered her arrival while her dynamic performance gained her many new ones. For her impassioned performance, Jeri Ryan has been selected the SpoilerTV Staff Choice Performer of the Month for February. 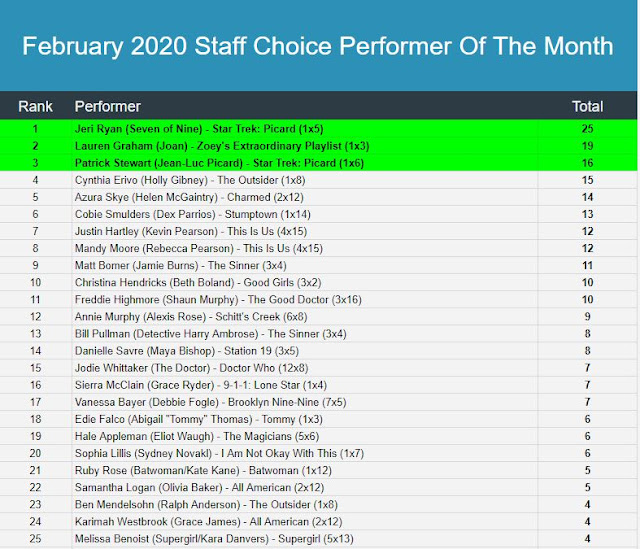 Sam Heughan and Jeri Ryan’s winner articles will be available later this month. In the meantime, please feel free to use the comments section to discuss these two worthy winners and their amazing fellow nominees.

Thanks to all of you we have an amazing list of nominees for this round of POTM.

Now it's time to determine who will be our February Readers' Choice Performer of the Month. The results will remain hidden for the duration of voting. The results of this poll and the Staff voting will be revealed after the poll closes.

Now comes the hard part where you can only vote for 1 performer. The poll will be live until Saturday, March 7th at 6 pm ET. After you vote be sure to make a pitch in the comments section for what the performer you voted for most deserves to win.