Katie decides her relationship is in danger, when she realizes she and Greg don't have anything in common, except the kids. Meanwhile, the kids each find themselves facing challenges in their own relationships.

Katie advises Anna-Kat to show interest in the things Franklin's interested in. After-all, common ground is what relationships are built on, right? What is Franklin's newest interest? Square dancing! They're offering a unit in P.E. and he's excited to strut his stuff. Anna-Kat reluctantly agrees to take the unit with him, as long as he limits himself "to one 'Yeehaw!' and one 'Little Lady' a day!" 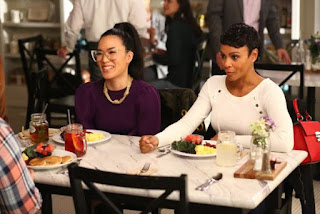 Oliver quickly calls Katie out on her advice to Anna-Kat. She and Greg never do things together, and outside of the kids, they're not even remotely interested in the same things. At Second Breakfast, Doris and Angela affirm Oliver's sentiment. Doris realizes that her and Richard's breakup was coming for a long time. They were leading separate lives with nothing in common. Angela agrees her breakup had to do with different interests as well (Although her divorce makes a bit more sense.) - "She wanted to take a cooking class...and I wanted to sleep with other people!"

Taylor and Trip are busy preparing her audition tape for Carnegie-Mellon. Greg offers to film the video. ("I was a filmmaker back in college. I still have my Super 8 camera!") But, Taylor says Trip is just going to do it on his phone. A bummed-out Greg steps out. So, when Taylor comes to him later asking if he's still up for filming her video, he's surprised. Apparently filming with Trip has been going...well...really bad! He's talking through the video, jumping in to see himself, and even including Luther in the tape. This seems to be a new level of stupid, even for Trip! Either way, Grey happily agrees to take his place.

Oliver, meanwhile, is facing his own problem. After a bowling game with Cooper, his girlfriend Charlotte, and Bri, Cooper tells Oliver that he's going to tell Charlotte he loves her. Oliver begs him not to, as he doesn't feel he's ready to tell Bri the same. And since Cooper and Charlotte and Oliver and Bri started dating at the same time, and Charlotte and Bri are also best friends, Bri's probably going to wonder why Oliver didn't say those three magic words to her as well. Cooper reluctantly agrees not to say anything (or sky-write anything!) to Charlotte yet.

Katie, now worried about the stability of her marriage, makes a chart of her and Greg's interests. Her interests include Jason Statham movies, wine, MMA, roller-coasters, and Russian dashcam videos. Greg's interests include puzzles and games, walking tours, hunting for geodes, and jazz sub-genres. Yeah, there isn't a whole lot of overlap! Katie tells Greg that because they have no similar interests and spend very little time together, their marriage is going to fall apart just like Angela and Celeste and Doris and Richard. Greg disagrees and attempts to Venn Diagram their interest lists to find some common ground. And he actually gets somewhere. Katie likes wine. Greg likes games and trivia. And bars have both! "[His} nerd circles are gonna save [their] marriage!"

At school, Anna-Kat and Franklin start square-dancing, and while Franklin's great, Anna-Kat doesn't quite get the moves and she's frustrated. (Side note - As a girl whose first memories are going square dancing, and who still can't do anything but get out there and shuffle her feet - I feel you Anna-Kat!) When Franklin switches off with Anna-Kat for another partner, Anna-Kat gets pissed that he ditched her and she messes up the whole group's dance, getting them both kicked out of square-dancing. Franklin angrily confronts Anna-Kat, telling her that she's ruined his chance for his first-ever A in P.E. (Apparently he's gotten C's up until now. I didn't even know elementary schoolers could get that bad of a grade in gym. Franklin must really suck...)

Greg and Taylor get ready to film Taylor's audition. Of course, Greg goes way overboard to make the most elegant video possible and gets string lights and roses and a fan. Taylor doesn't want any of it and she and Trip take everything out of the office and into the hallway before she lets Greg start filming. Trip's still a problem though, even when he's not the one behind the camera. He's still loudly crunching chips and talking through the scene and in general just ruining every take. A frustrated Taylor finally sends him out to play with Luther so she can film in peace. ("Fine. But he and I are going to get dirty. And we're going to track it back in the house!")

Oliver and Cooper bring Bri and Charlotte over to the Otto house, where Oliver admonishes Cooper to stay strong and not tell Charlotte he loves her. After-all, the Otto house is "the least romantic place on earth!" Well, at least it's supposed to be. But the group walks in to find the set up from Greg's audition scene in the hallway. And suddenly Charlotte's standing in front of the string lights holding a rose, and her hair's being blown by the fan, and Taylor's singing songs from The Greatest Showman in the background, and poor old Cooper just gets swept up in the moment like a love-struck cartoon character. Honestly, I'm a bit surprised we don't see his eyes turn to hearts. He tries to blurt out that he loves Charlotte but Oliver pops him in the head before he can get it all out and quickly suggests they go watch some depressing movies. Crisis averted! 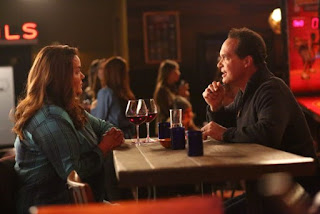 Katie and Greg head out to the bar for a night together. Even though they both have fun, they realize pretty quickly that they still didn't actually hang out together. Greg played trivia all night and Katie drank and played arcade games. About the most interaction that happened between the two was a wave. They both start to worry that maybe their marriage really is doomed.

But the truth about their relationship is that it's their differences that make them perfect for each other. And it takes the kids to remind them of that. When Franklin shows up to apologize to Anna-Kat, kickball in hand, Anna-Kat tells him he was right to do square-dancing, because it's okay for them to have different interests. It gives them plenty to talk about and allows them to balance each other out. Katie and Greg realize that they are the same. They balance each other out. As they lay in bed that night, each watching their separate TV shows (90 Day Fiance for Katie and a documentary about dirt for Greg), they decide that they don't necessarily have to do something together to still be together.

Cooper, meanwhile, is still trying to tell Charlotte he loves her,  and asks Greg and Katie when they first said: "I love you." Greg reveals he said it in the aisle of a drugstore because it felt right at that moment. So, Cooper marches up to Charlotte at school and tells her he loves her. And she promptly dumps him! And because Charlotte is best friends with Bri, Bri decides to follow suit and dump Oliver! Oliver is pissed at Cooper (but not so much that he won't forgive him after an apology dinner cooked by Wolfgang Puck!)

Taylor and Trip watch Taylor's audition tape, and as Taylor gets ready to send it in, Trip tells her he doesn't want her to go. Taylor figures out Trip's been intentionally sabotaging her audition tape, and she's not happy. He wants her to stay with him and go to a local college, but he's not willing to consider going to Pittsburgh with her. The two admit that they don't know where that leaves them.

Random Thoughts:
-Best line goes to Oliver when he and Cooper are discussing their failed relationships. "Next time I would encourage you not to ask my mom for relationship advice. It's like asking Taylor to be your chemistry tutor."

Do you think Taylor and Trip will work it out? Are Oliver and Cooper going to get another chance with their girls? Let me know below!