Hi guys, I confess that I lost track of the days. Apologies for being so late with this.

After dealing with some frustration with Sonny in this episode I found that I really enjoyed it. I think it is my favorite deployment episode of the series thus far.

It wasn't made clear what the mission, in the teaser, was all about. What was important, we later learned, was that they ran into an issue that (a) put half the team in danger and (b) require Jason's presence to get them out. Although, one could wonder if any other member of Bravo team (had they been in the same location) would have gotten the team out.

It's (b) that feeds into Jason's larger issue. It's also why Jason's story question is becoming more and more interesting for me. 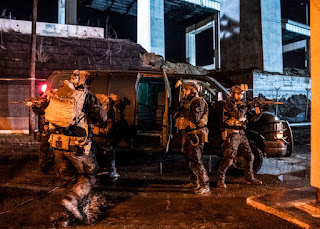 Sonny's petulant behavior, after being told there were consequences for his behavior, just irked me. I was not on his side at any point during the episode.

I'm not sure I can argue with Jason in terms of his responsibility for not checking Sonny before he stepped that far out of line.

In terms of the story that's being set up, it was great. (There's also the added bonus of finding out more about Sonny.)

If I ever behaved that way my mother would have snapped me back into my place, even as an adult. Not acceptable. And not a great look for Sonny.

Then I realized how neatly the writers had planted the seeds for a much bigger story.

Lindell has finally made his agenda clear, and I can't really argue with it. Once again, the writers have brought real world challenges into the landscape of this show. Kewl.

The world is changing. The military must and, in reality, has begun to change as well. The old guard will have to either adjust, adapt, or step aside for the next generation.

That concept not only freaked Jason out, it freaked me out. They found a way to let Ray move on and stay in Bravo. But Clay may be taking the officer route and Jason is being pushed to think years down the line. Is this a sign that the show is looking at a series finale in the near future?!?!?

As a story, however, it's pretty good one. These are not only serious questions for these characters, but they're real questions that don't have easy answers.

Happily, these writers have earned my trust. I'm anxious to see where the story goes.

Now I have the answer to my question about Clay and his future. If Clay wants to take the officer track, he will have to leave Bravo Team. It looks like he is planning to change the course of his career.

Let me take a moment to soften my stance on Rebecca. I appreciated the fact that she never took a side in Clay's decision. She merely helped him consider all sides and come to his own conclusion.

Rebecca's advice was never selfish. She merely pointed out that Clay knows the endpoint of his current professional path. Clay will, essentially, become Jason. Which used to be exactly what Clay wanted. The question is, is it still what he wants?

As with his first reaction to Ray's decision to go for warrant officer, Jason's advice was extremely selfish.

Judging from the team's reaction to Commander Shaw, it seems like a great idea to have someone who has served in combat making decisions at the Pentagon level.

Ray was still struggling to help his daughter deal with her new understanding of how dangerous her father's job is.

We've grown used to Jason's kids accepting who their father is. Now, we're seeing the beginning of that process and it's a little heartbreaking. 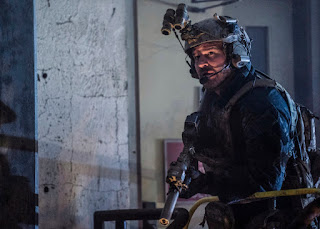 When Jason announced that his son wasn't going to visit, part of me wished they'd hired a different actor to play Mikey and brought him back.

Then I realized that the character's absence might not be a matter of an actor's availability.

Jason's spent a long time pushing people away. Maybe Mikey is on that list?

The idea of Jason stepping aside for “the next generation to take us into the future” threw him for such a loop that he blew up his last night with Natalie. Then he dumped her; choosing Bravo Team over Natalie (and his own happiness).

I'm wondering if they're underlining the distance between Jason and his kids as part of a way to force Jason to make the changes he needs to make to gain emotional balance.

I've grown to like the guy. I'd love to see him overcome his issues and grow to a point where he can have as healthy a relationship as Ray and Naima have. I love her 'this is what I signed up for and I can handle my job as a Navy wife' attitude.

I really enjoyed the episode. I'm being pulled into the deeper story questions of the back part of the season a little quicker than I was with the Swanny story arc. I think it's because this arc focuses on Bravo Team.