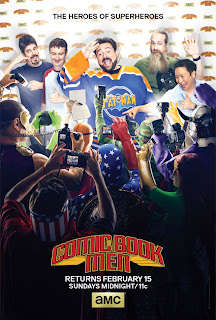 Press Releases
Melissa and Joey - Episode 4.03 - Let's Get It Started

Burbank, CA (January 13, 2015) Mel and Joe find themselves on opposite sides when he’s ready to start a family right away, but she wants to wait, on an all-new episode of “Melissa & Joey,” airing Wednesday, January 28 (8:00PM ET/PT) on ABC Family.

Joe wants Mel to stop taking birth control so they can start a family, but she’s unsure. So he invites Nate (guest star Ian Reed Kesler) and Gillian (guest star Tamera Mowry) over with their new baby to see if he can change her mind.

Meanwhile, Lennox tries to help Zander (guest star Sterling Knight) move on by setting him up with her friend Lilah (guest star Ayla Kell), and Ryder announces his unexpected plans for the future.


Source:
ABC
Togetherness - Episode 1.04 - Houston We Have a Problem

Alex and Tina fly to Houston to pack up her belongings; Tina finds herself jealous of Alex.

Michelle organizes a day of fun with old friends; Michelle challenges a group of hipsters to a game.

Brett meets a woman during a morning hike; Tina tries to make peace with Alex.

“Mike Myers is one of the great comedy minds of this or any other era,” said Lombardo. “The opportunity to collaborate with a talent of his stature is tremendously exciting.”

“I’m thrilled to be at HBO,” commented Myers.

Mike Myers, one of the most multifaceted performers of his generation, has brought an astonishing array of memorable characters to life in film and television as an actor, director, producer, writer and the creator behind such iconic characters as Wayne Campbell, Austin Powers, Dr. Evil and Shrek.

Myers most recently made his directorial debut with the award-winning documentary “Supermensch: The Legend of Shep Gordon,” which chronicles the life of talent manager Shep Gordon. The film premiered at the 2013 Toronto International Film Festival and was released in June 2014 by RADiUS-TWC in partnership with A&E IndieFilms.

Born and raised in Toronto, Canada, Myers began his professional career with Chicago’s Second City troupe. “Saturday Night Live” producer Lorne Michaels’ discovery of Myers at Second City led to his debut as a featured performer and writer on the show in 1989. Myers successfully brought his popular “SNL” character Wayne Campbell to the big screen in “Wayne’s World” and “Wayne’s World 2,” both of which he also wrote.

Myers also created, wrote, produced and starred in the smash hit “Austin Powers: International Man of Mystery.” Myers’ portrayal of Austin Powers spawned two sequels, “Austin Powers: The Spy Who Shagged Me” and “Austin Powers: Goldmember.” Myers lent his voice to the title role of “Shrek,” the beloved green ogre, for the DreamWorks animated franchise, which includes “Shrek,” “Shrek 2,” “Shrek the Third” and “Shrek Forever After.” “So I Married an Axe Murderer,” Myers’ first film following his tenure at “SNL,” is a cult classic.

Myers received a star on the Walk of Fame in Hollywood for his impressive body of work, and received an ensemble SAG award for his memorable work in Quentin Tarantino’s “Inglorious Basterds.” He was also honored with the Jack Benny Award by the student body of the University of California, the AFI Star Award at U.S. Comedy Arts Festival, numerous MTV Movie Awards, including the MTV Generation Award, and has a star on Canada’s Walk of Fame. His character Shrek also has a star on the Hollywood Walk of Fame.

Video Here [US Only]