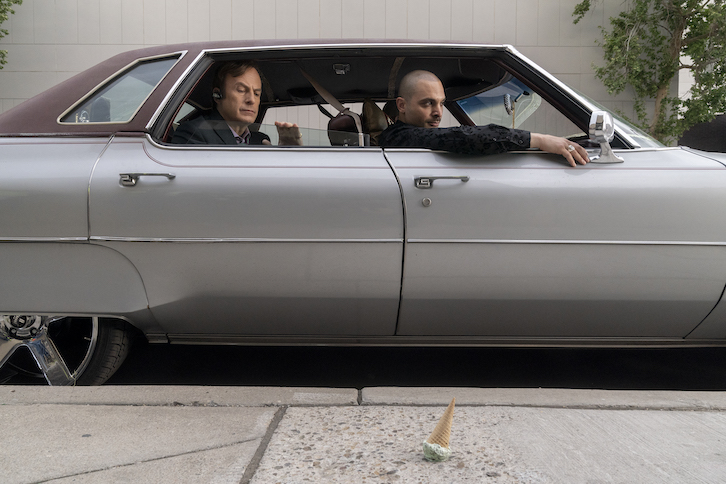 Robbing a gas station, stealing lawn ornaments, smashing cars, buying more meth, and smashing up more cars. You name it those weirdos did it. Let's say Kim was right about handing out discounts. All you are doing is giving the person a free pass to commit crimes.

All Nacho wants to do is get through the day without piss off Lalo or Gus or both. But suddenly his worst almost came true. Nacho was sound asleep with a girl next to him and another in the living room. Then suddenly, Nacho is woken by Gus's men and taken away dressed only in his underwear. Gus brought Nacho to where his father plays cards. He wanted to scare Nacho into getting information out of Lalo. Gus wanted to know what are Lalo's plans, how long does Lalo plans on staying on this side of the border. Gus told Nacho that he must do whatever it takes to earn his trust; otherwise, Nacho's father will pay the price.

Jimmy and Kim have lived together for about two years. And that little one-bedroom apartment is lovely but is starting to get small. Jimmy has always been the dreamer in their relationship. When he drove by a house, he like that it was for sale he knew it was perfect for him and Kim. So the following week, Jimmy jumped into Kim's car while she was on her way to work and told Kim that he has something that he needs to show her. They drive up to the house, and Kim is confused. They aren't buying a home now. Not now, but they're both doing great in their careers, so maybe it's time. Kim took a look at the house only to shut Jimmy up. But by the end, her mind was changed, and Jimmy knew it would be.

Lalo visited his uncle Tio (Don Hector) at the nursing home to give him an update about how business is going. Lalo also wanted to give Don Hector an update about Gus. Gus told Lalo and Bolsa that he was building a chiller for his restaurant. But Lalo doesn't believe Gus. He tells Don Hector that it's something much larger than that. A lab, vault, tunnel. Lalo told Don Hector he would not leave until he finds out what is Gus hiding.

When Mike pulled the trigger on Varner, he fell into the same hole he was in after his son dies. When he tells Gus to shove it, Mike begins to drink himself sour, and it only hurts the one he loves. Because one early morning, Stacy called asking Mike to babysit his granddaughter Kaley, Mike very much hungover agreed to watch his granddaughter at the last minute. Kaley had homework to do, but Mike wanted to finish the playhouse steps, so Kaley helped him while practicing her times tables. Like all little girls who lose their fathers at a young age, ask questions about their dads. Kaley was asking Mike tons of questions about her dad, and it was starting to get under his skin until he snapped and yelled at the young girl. Kaley ran off into her room, crying and never came out. When Stacy came home, Mike quickly got into his car and said: "Kaley's in her room and didn't eat dinner."

Now that Jimmy has established the name Saul Goodman as a lawyer, he is doing pretty good for himself. Like he told Kim he has 45 clients. But now the trick is to get a good deal with the ADA which, by the way, is the same ADA that wanted to put Huell away for 2 1/2 years for knocking that bag of sandwiches over that cops' head.