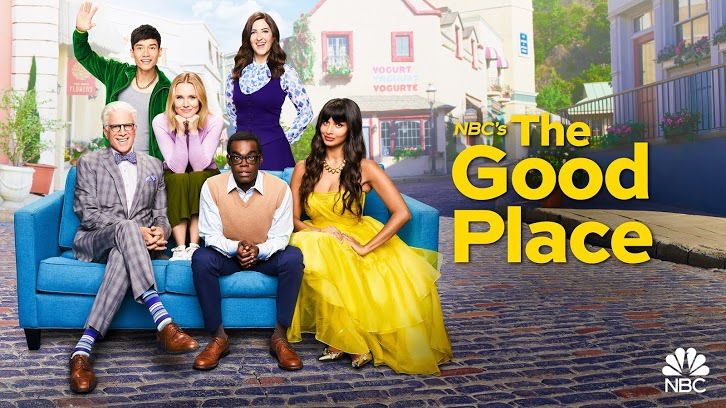 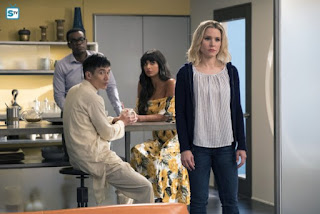 Apologies for the shorter review this week, everyone! It has been a super busy week. Let's dive right in!

Although not as laugh out loud funny as last week’s episode, this was still a strong episode. I’m a fan of the development of the core four helping Michael in exchange for entrance into The Real Good Place as well as Michael having to take ethics lessons with everyone else. Last week, I mentioned being very unsure of where the show was heading, but now it’s a little clearer. We have a possible end goal (the possibility of getting into The Real Good Place), villains (Vicky/the actors), and both a potential double-cross or redemption storyline with Michael. I’m not saying that I now want everything tied up in a fancy, clean bow as we head towards this potential endgame, but it’s nice to have an idea of where the series is heading. Things can (and probably will) get forked up, but still, I think it was a good move to push past the reset piece of the series and move into a clearer direction.

Another thing I loved is how much we got to see of our core four, especially Tahani, who was the real standout for me in this episode. Between seeing her tragic death story as well as her realization that she belongs in The Bad Place, all of which were accompanied by her hilariously entitled attitude, I cared about her in a way I hadn’t since the season 1 episode where we find out about her relationship with her sister. These moments are essential in a show as ridiculous as The Good Place to keep it grounded in relationships and to help the audience care about what happens to these characters.

And then there’s Michael. As I mentioned above, I don’t know if this is a double-cross situation or a redemption storyline, but either way I’m very intrigued. Michael’s arc has been a rollercoaster since day one going from adorable, high maintenance angel, to losing his mind, to evil mastermind, and now he’s looking at these ethics classes with an eye roll. While this makes sense given the fact that he’s essentially the Devil, The Good Place now has an interesting opportunity to either turn this into an amazing villain redemption story where he actually starts to want to be good, or give us another heartbreaking back stab from Michael. I think the former is more exciting and gives us more interesting story options (the core four and Michael being on the run from Shawn and Vicky, for example), so I do hope they go that route (or an entirely different route).

The only thing I didn’t love about this episode was that it felt a lot slower than previous episodes, which I think is because last season was all about twists and cliffhangers, and this was one of the first times the show didn’t end an episode on a giant cliffhanger. I think it was necessary to slow down and finally set up what “The Good Place” now looks like after the events of the past few episodes, but this episode still dragged in certain scenes.

Overall Grade:
A-. A solid and funny episode that shakes up alliances and gives us some direction.

Favorite Quotes:
Jason: I’ll tell you what I want to know right now before we go any further. Did the Jacksonville Jaguars win the Super Bowl last year?
Michael: Oh, you’re serious. No.
Jason: Will they every win the Super Bowl?
Michael: Jason, I can’t predict the future. But no, they won’t.
**Not the funniest quote, but I am a HUGE Jaguars fan, so I had to include.

Michael: Yes, there is a potential method of transportation.
Tahani: Is it nice? Is there business class? Can I preboard?

Tahani: I belong in The Good Place. The real one with the good people. Who do I speak to about correcting this?
Michael: Me. And you’re wrong.
Tahani: I would like to speak to your manager.

What do you think of our new direction? Let me know in the comments!