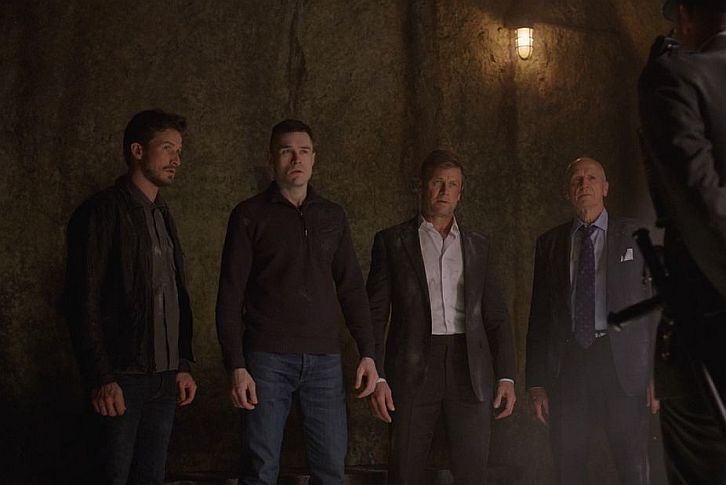 You’d think an episode of “Dynasty” involving a high-stakes rescue mission and a con artist trying to scam the Carringtons would be exciting and soapy. But “Robin Hood Rescues” goes with a goofy tone in both storylines that made this one of my least favorite episodes of the entire series.

We catch up with Blake and Anders mid-kidnapping, having been locked in a dungeon by the king of Moldavia. His royal guards inform Blake that the king wants him to order the CA oil tankers back to Moldavian waters, but both believing that the tankers are their only bargaining chip and greedily wanting to hang onto the oil, Blake literally spits on that offer, and gets slugged in the face. Back in Atlanta, Cristal is shading Adam’s plan to rescue Blake himself with help from Liam (who, given VKI’s ties to Moldavia, has secured blueprints and transport). Shading Cristal right back about her recent indiscretions (I gasped at his “You seem to like getting on your knees these days and praying” line), Adam insists that, with Liam’s local contact as their guide, they can slip in and slip out without incident. Too bad said guide betrays Liam, landing the rescuers in the same cell as the rescuees.

That, ugh, brings us to Sam. You see, Sam had overheard Liam making travel plans and, mistakenly believing it was a boys’ trip to check out bachelor party hotspots, stowed away. Terrified to learn the real reason, Sam stays on the plane and drops some party drugs to deal with the stress. And given how he’d randomly been talking about admiring the actor earlier in the episode (plus his name being in the credits), it’s not a huge surprise when he conjures up a hallucination of Danny Trejo (“Machete”). Prompted by the Trejo phantasm and fueled by pharmaceutical courage, Sam calls on his skills as a burglar from back in the day to sneak in and lead the others to safety.

My problems with this plotline are numerous. First, this was a disappointing way to introduce such an iconic piece of “Dynasty” lore as Moldavia (not that I think this is the end of it. Given we never see the king, I’m guessing he’s going to show up sporting a familiar face, and will become a recurring antagonist for the Carringtons). Second, something about the optics of the ladies being left out of the rescue – Cristal is ordered to stay in Atlanta while Fallon is purposely kept in the dark – and gay man Sam only being brave and useful under the influence of drugs didn’t sit right with me. Third, they skipped over what could have been an interesting story thread of Adam and Liam – who have legitimate beef and tension – learning to work together, instead having them be smoothly in sync from the start. Fourth, and finally, while I like Danny Trejo, this guest spot was sooo off-brand for “Dynasty.”

Anyway, everyone makes it back to Atlanta safely. Cristal – who left an off-screen Father Collins a voicemail ending their affair – celebrates by leaving Blake (I thought Grant Show was great in this scene, btw, as Blake pleaded with her to stay and fight for them), saying she needs time to think. And while Blake offers Adam a right-hand seat at Carrington Atlantic as a mea culpa for berating him throughout the rescue, a bitter Adam is fed up with his father’s treatment of him, and later tells Kirby in bed that he only accepted so he can “make him pay.” 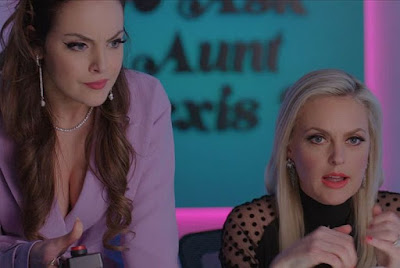 So while her brother and her betrothed are dealing with Blake (and sidebar – there is a kinda funny moment when Fallon overhears Liam and Sam talking about their escapade and is all, “You did what now?!”), Fallon is wrapped up in a different parent’s problem. She is being sued because a caller into Alexis’ show took her career advice to “get behind the wheel and drive without looking back” literally and was injured in a car accident. The two spend most of the subplot sparring, with Fallon willing to pay the woman off to get her to go away cheaply and quietly and Alexis stubbornly refusing to admit liability and lose an identity she has grown to love. In the end – in a story turn you can see coming a mile away because you’ve watched TV before – they bumble into the realization that the woman faked her injuries in hopes of getting an easy payday. It’s suuuch a stale storyline, I remember something similar happening to Brenda Walsh on the original “Beverly Hills, 90210,” and that episode aired in 1992!

The only semi-interesting thing about this subplot is that it involves the return of Evan. Remember Evan? You might not, given we haven’t seen Evan since episode six of the season, back in November! But now he’s suddenly back, somewhat suspiciously reappearing with a claim that he’s still cc’ed on Fallon Unlimited legal matters. He offers Fallon advice on the lawsuit, but is also noticeably pushy about trying to get her to go to drinks or dinner with him. But after busting the con on her scam, Fallon decides to heed Alexis’ warnings about his intentions and tells Evan they shouldn’t hang out. And it’s a good call as it’s then revealed that he set the whole thing up, in an effort to play hero to Fallon. I’m guessing this was the start of a build to some season finale shenanigans (that we now won’t see), but...why? This actor/character was a dud, that’s seemingly why the show got rid of him in the fall!

Lastly, let’s talk about Culhane and the Deveraux women, who we first spot celebrating the success of their reality show. But literally while Culhane is assuring a skeptical Kirby that he’s playing them just as much as they’re playing him, we see Dom get a text from a prominent producer. And all it takes is this guy promising to make her the next Oprah for her to sabotage negotiations for a second season of the show, effectively cutting Culhane out. But oops! Deliciously, this was all a sting set up by Culhane and Kirby, as the producer was a fake. And after Vanessa fires her ass, Dominique is left with zilch, nada, nothing. It was fun to see Culhane scheme himself up a win for once, but I’m also excited to see how Dom strikes back. 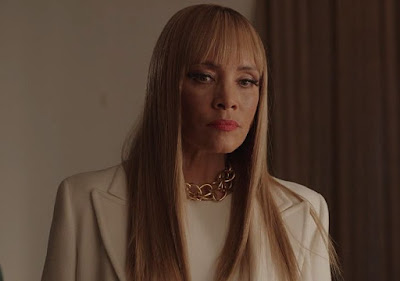 I wish someone had rescued me from “Robin Hood Rescues,” but maybe you had a more positive reaction to this week’s “Dynasty.” If so, come share your thoughts in the comments section.