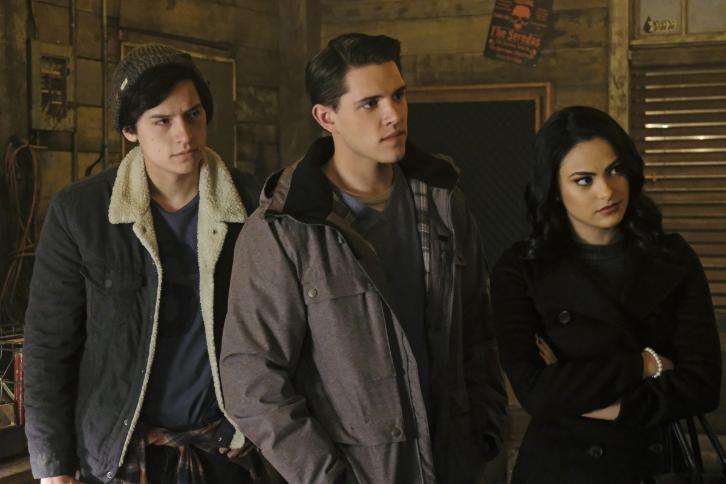 
“[In] most of our episodes, there’s a balance between the soap and the mystery; episode 12 is all about the mystery,” executive producer Roberto Aguirre-Sacasa says of next week’s hour. “The kids are trying to like prove that F.P. was framed, but no one believes them. It seems that the entire town is going in lockdown to railroad F.P., so it’s a little bit of a race against time. There are still a couple of characters out there who think someone else may have done this to Jason Blossom, so it’s a big mystery episode.”

Speaking of Grundy, after Archie’s secret affair spilled out during Jughead’s party in the last hour, will the truth come back to haunt him? “That’s a really good question,” Aguirre-Sacasa says. “You think it would, right? It has to. It’s so big.”

THINGS ARE NOT ALWAYS AS THEY SEEM – Archie (KJ Apa) and Veronica (Camila Mendes) are shocked to learn of the arrest but know they need to come clean to their parents about what they uncovered.  Still hurt by the betrayal of his friends and torn over who to trust, Jughead (Cole Sprouse) reluctantly joins them in a quest for truth.  Meanwhile, Cheryl (Madelaine Petsch) confronts her mom about why she treats her so much worse than she ever did with Jason.   Lili Reinhart, Luke Perry, Madchen Amick, Marisol Nichols also star. Rob Seidenglanz directed the episode written by Michael Grassi (#112).  Original airdate 5/4/2017.