Sorry this is a little late. It's been a week.


This felt like a breather episode post the loss of Vic. And the race track opener felt like padding for a short script. Not that I minded. I thought it was still a good episode.

The theme between the personal stories was a little more forward than usual. Several characters were looking at whether it was better to ignore the past or learn from it and look forward.

We all know Jason prefers (or at least tries to) ignore the past considering it ultimately useless. He's ready to ignore Ray's excellent advice until he accepts that he's about to lose Natalie. What he said about his late wife broke my heart and made me hope (yet again) that he's on his way to figuring it all out. Unfortunately, we all know too well how frequently Jason repeats his mistakes. 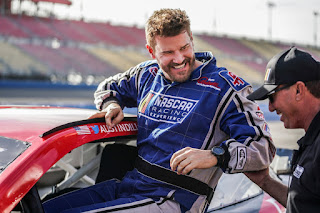 Ray's brush with the past comes with an email from Vic. (I'm going to bet it was written while Vic was drunk.) Jason's council is to blow the man off and ignore the past. Not surprisingly, when Ray forgives, it's not just words.

He calls Vic and helps him through his emotional issues. The move is so atypical that Vic sends word to Ray's review board about his actions. Ray's a shoo-in for warrant officer now!

Okay, would the 2 or 3 people who didn't know/guess (a) Stella was back for Clay or (b) was going to repeat history by declaring her love right before he was deployed please raise your hands? I don't want to make fun of you, it just seemed easier than everyone else raising their hands. LOL

After words of wisdom, from Lisa this time, Clay decided to move forward an continue his relationship with Rebecca.

Everyone decided to move forward.

The mission was very low-key compared to a lot of Bravo Team's missions.

Although the ep did give Sonny plenty of time to play dorky hillbilly. It's a role he enjoys, is good at, and usually let him come out on top of most situations. 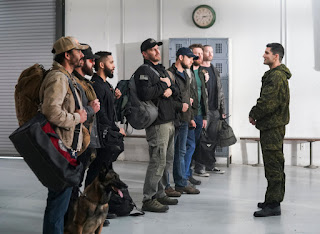 I have a theory. I believe that about 70% (completely made up percentage) of the men in prison are there because of the "are you chicken" phenomenon. So I laughed out loud when Jason employed it to get his team off of the base during a lock down.

The op itself went perfectly. It was kind of cool watching Bravo Team calmly walk across the roof and get in the car.

Sonny knows about 'crudites'? (Even I keep buying his act. :-)

My favorite Sonny nickname in this ep? Soda Popinski

I really enjoyed the episode. It wasn't one of the mind blowing ones. But that's okay. I liked the cohesive thread running through the personal stories this week.