SPOILERS AHEAD! PLEASE DO NOT READ IF YOU HAVE NOT WATCHED Room 104 3x01 The Plot yet!

Season openers like this make me glad I decided to cover Room 104.

This season opener is essentially a two person one-act play (of course, written out in a TV episodic structure...but, still..). At first, it seems that this is the first episode of the series not set in the titular hotel room. But, surprise, this estranged brother and sister duo are reunited at the site of the future hotel that the Room 104 is to be built upon. As one can expect, not everything is going to go according to plan here. Betrayal, murder, and possible possession are all a part of the Duplass' grand scheme here. The only thing missing, I felt, was a Dick Hallorann-esque character explaining the the motel was built upon an old Native American burial ground, or (since this is HBO) we could just assume as much. Nothing completely unexpected if you've been paying attention to the previous two seasons, but it nice that the Duplass' seem to finally be going somewhere with this welcome change of exterior scenery. Just don't expect them to show their whole hand just yet. They know they have our attention and are now intricately revealing how their vision for this series isn't just meant as a disconnected interior experience.

Watching Room 104 religiously the last two years, I always got the feeling the the Duplass Brothers and their numerous director collaborators (none of whom receive final cut on any of their episodes, I should point out) were going out of their way to make sure the episodes never start seeming like they are repeating themselves. Granted, there were a few episodes in the 2nd season that sort-of ran together where one involved a woman hearing a voice in the walls of the room and the other another woman (the actor even physically resembling the first) having a nightmare that may or may not have been real, but that was a major exception in an otherwise outstanding fusion of imagination, inventiveness, heart and heartlessness.

I have been told by reviewers that have seen the whole season 3 already (Full disclosure: I have not seen any episodes in advance of their airing) goes into new directions the creators had been holding on until this 3rd season.

Now, that I see the direction they are willing to go in, I can see why they waited. The weight of a self-mythology wouldn't have felt as heavy had it not been earned by the disconnected events of the previous two seasons. Half of the time, I thought the series was a horror/sci-fi show (as it shared many of the traditional tropes like ghosts, visions, murders, delusion, teleportation, etc.). The rest of the time, I felt that the Duplass' were basically picking up where David Lynch was forced to leave off when HBO didn't pick up his Hotel Room series to series back in the early 1990s (a sad decision, that). Several episodes even felt like not-so-distant ancestors of those now-legendary episodes. Of course, in the era of streaming, 4K Blu-Rays, and endless portable devices, Room 104 will have more of an audience than David Lynch could've ever dreamed back in the analogue era, so that is probably for the best that his early-90s pilot now serves as the template for this more 21st century vision (yes, you can argue with that in the comments section, but I'm sticking with that assumption).

So, will the Duplass' decide to bring us viewers back to this timeline to explore the construction and possible haunting of the motel further? Based on what I have heard, it doesn't sound like it, at least for this season, but I'm ready for anything now. If a rumored Season 4 does happen, I could see them going further into the mythology, the way Damon Lindelof sprinkled anthology/meta-philosophical scenes throughout the season openers of The Leftovers (another standout HBO series). So, while Room 104 may lack pure originality in its presentation, it continues to get by on mostly borrowed thrills, chills and outstanding guest surprise performances who look like they are relived they're not on the CBS All Access Twilight Zone revival. Late night HBO and seekers of great anthology shows on traditional cable networks are all the better for it. 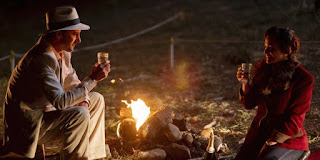