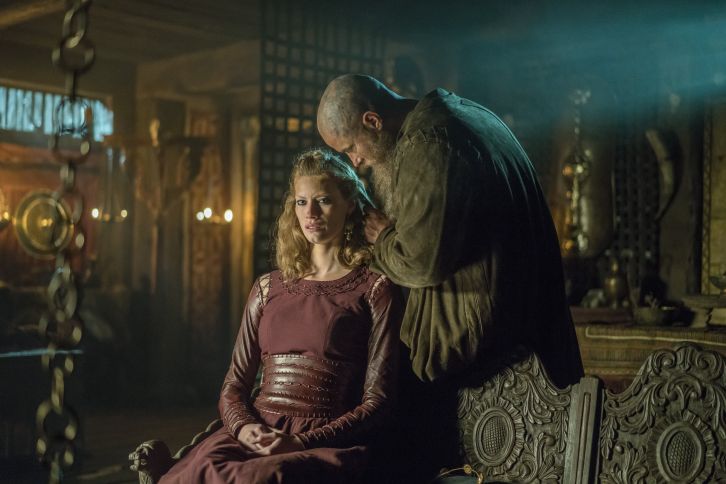 Sneak Peek
Thanks to sonofgod87 for the heads up.


Will viewers eventually see him as a hero the way they see Ragnar?

I think so. There is absolutely a chance that he could be seen as a hero like Ragnar. But by the same token you have Bjorn Ironside who is going to go into the Mediterranean and becomes very heroic. And then Ubbe is very heroic. In a sense, he is what I like to call the liberal wing of the Viking party. He takes after his father a lot and he is very heroic. So the heroism kind of spreads across the sons; for the audience there's now more choice. But the fact is that Alex is one of those actors you simply cannot take your eyes off of. The lead character doesn't have to be an angel, in fact, it's better if he or she is not an angel and is more complex with a dark side. You still want to watch them and you're still totally engaged with them because you can see the good side of them. Ivar is like that only I would say he’s probably more extreme.

This season is the most momentous and most emotional seasons we've done and there are huge changes and upheaval involving nearly every one of our major characters.

Source:
Read More on THR
Historically, Ivar does end up leading the Great Heathen Army that invaded England in the late 800s. But why does Ragnar ask Ivar to go to England with him?

This will come up later, as they’re dragging Ivar around England. But Ragnar says, “I know that, of all my sons, you will be best placed to revenge me, and everyone else will reject you. You are full of anger, but you can use that anger, and you can become extraordinarily special.” Having tried to kill him off as a baby, Ragnar recognizes something in Ivar that is valuable and good. Ivar will become, historically, the most famous Viking. In this season we’ll get to that.

Although, as he tells Floki just before trying to hang himself, he doesn’t know if they’ll meet in Valhalla. Was that a genuine suicide attempt, or more of a dare to the gods to send him a sign?

There are many answers to that question. In one way it was genuine. Ragnar has come back, and though I’m sure he didn’t expect to be welcomed back with open arms, most of his children have rejected him. He’s sort of out of time now. He’s depressed. But at the same time, you could perfectly well say he’s looking for a sign. Because if he does hang himself? If you don’t die in battle, you don’t make it to Valhalla. He’s testing his destiny, he’s testing his fate. What he really has to do is go to England and check out the wreckage of his settlement and have some sort of conversation with Ecbert. The two things that brought him back were that he loves his sons and wanted to see what becomes of them. But there was unfinished business in England. In some ways he knows that’s his destiny — whatever it is, it will be deiced in England. In one way I don’t take it too seriously, it’s a momentary thing that’s brought up by meeting with Lagertha and Floki. Feeling lonely and isolated and wanting to do something about that, but also kind of knowing the gods will not allow Ragnar Lothbrok to die that way.

The Kattegat locals chide Ragnar that the gods have deserted him as he struggles to crew his voyage to Wessex. It’s Bjorn who has charisma now as he prepares to fulfill his long-held dream to explore the Mediterranean in a sleek new boat built for him by Floki. By contrast, Ragnar must accept weathered boats and a crew he has bribed but when Aslaug foresees that the fleet will be lost in a vicious storm her warnings go un-heeded by Ragnar and her precious son, Ivar.