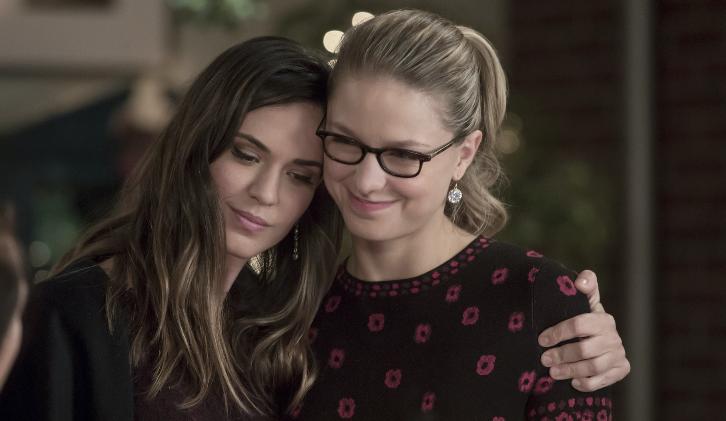 Sneak Peek
Thanks to Li for the heads up.

TV Line Interview
Thanks to Li for the heads up.

“She’s the Big Bad, she’s a Big Bad, so it’s really everybody trying to figure out … what they have [to do] to be able to take her down as quickly as possible,” adds Chyler Leigh, who says there will be a “collective force coming from Supergirl’s side” to stop Reign.

Sam’s transformation will be especially difficult on Lena, who’s not only losing her company’s CFO (“I choose people badly, don’t I?” Katie McGrath jokes), but she’s also losing someone she now considers to be a close friend. “You see how close Kara, Sam and Lena are getting, I can’t imagine that it isn’t going to become difficult with Sam essentially being Supergirl’s arch-enemy and all three of us being friends,” she says. “It’s got to come to a head somehow.”

Promotional Photos
Thanks to Li for the heads up.

REIGN CHALLENGES SUPERGIRL – Supergirl (Melissa Benoist) investigates a mysterious symbol popping up all over National City, tracing its origins back to an ancient prophecy and the mark of the World Killer, Reign (Odetee Annable). Meanwhile, the tension between Lena (Katie McGrath) and Morgan Edge (guest star Adrian Pasdar) continues to build, causing James to step in and offer up some protection, and possibly igniting a spark in the process. Glen Winter directed the episode written by Paula Yoo & Caitlin Parrish (#309). Original airdate 12/4/17.