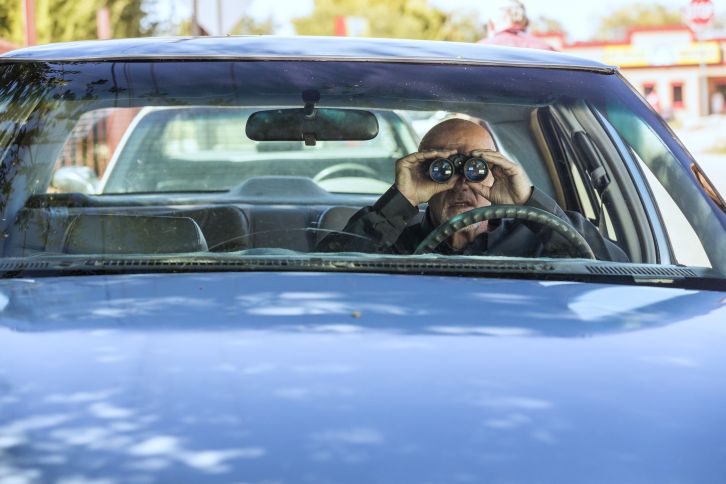 
Jimmy and Kim hire an assistant; Mike seeks out a mysterious acquaintance; Chuck uses the law to gain an advantage over Jimmy.


For the first two appearances, I interpreted Omaha as almost purgatory for Gene/Saul/Jimmy. Watching this time, though, is it possible that it's really more hell?

Gilligan: I think any of those things are possible, but maybe ultimately through purgatory or even hell, lies salvation. Who knows? Maybe it's a lot of different things and maybe it's gonna appear to be different things at different times to him and to us, the audience. This new world, this black-and-white world he finds himself in, it really is fraught with possibilities both good and bad. Not to be overly coy, but if and when we see more of that world — and as one of the first fans of the series, I'm hoping we do — I think we've got a lot of field to plow in the post-Breaking Bad/Omaha world. We've got a lot of story possibilities arrayed before us.

Source:
Read More on THR
ENTERTAINMENT WEEKLY: Was the addition of Gus a top-of-the-wish-list, no-brainer for you?

PETER GOULD: Oh, yeah. When Gus was killed off in the writers room of Breaking Bad, it was a very, very sad moment for all of us, because we loved the character and we love Giancarlo, and we felt there was so much more to say about him. But like Vince sometimes would say, Breaking Bad is a bit like Highlander: There can only be one. And he was right. Having the opportunity to bring the character of Gus back and work with Giancarlo again was too delicious to pass up when it was right for the show. One of the things that I’m proud of is we’ve resisted a lot of temptations about bringing characters back and situations back earlier in the show. Because we want to earn our pleasures. We want everything to make sense dramatically for the characters. But when we realized that the story was leading us inexorably in that direction, it was a very, very happy moment. Having said that, we inadvertently disclosed that to the public with our super clever encoded title for season 2, and we didn’t have the smarts to tell Giancarlo we were going to do that (laughs)… We put it out there in the world, and the fans once again proved that they’re way smarter than we are. So we had a very sheepish couple of phone calls with Giancarlo. But fortunately, he was a prince, and ultimately really happy to come back and play it.