I know that this is only the second episode of All American, but I am really enjoying this show. The pilot introduced us to all the characters and set up great stories, and I'm happy to say that this episode was even better.

"99 Problems" starts with a flashback to Spencer playing football as a kid. He's disappointed when he learns his dad isn't there to see him play. Then suddenly we're back in the present, and he's catching a football on the beach. Apparently the Beverly High kids hang out on the beach after school. Spencer talks to Leila which makes Asher irritated. Asher wants to get rid of Spencer, but Jordan reminds him they tried that and now Spencer is living in his house. He's here to stay. 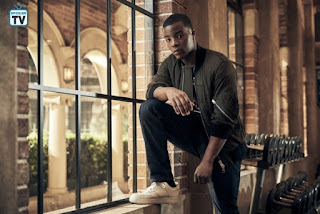 Spencer leaves the beach and heads back home to help Dillon with his homework. Spencer has been coming back home every day with some excuse like needing a sweatshirt. His mom tells him he can't keep going back and forth between her house and the Baker's or he's going to blow his shot.

Things are still rough for Jordan this week. He tries to bond with his dad by watching tape of Beverly's opponent and develop strategies, but Spencer interrupts. It seems like Coach Baker likes Spencer's ideas better. At practice Asher gets injured, and Spencer wants to replace him. Jordan thinks Spencer will get tired playing both offense and defense, but Spencer tells him to just worry about getting him the ball.

The Baker's and Spencer have to attend a party with all the boosters and, according to Leila, they are all interested in meeting the new star player. The party is formal, but Spencer doesn't have a blazer. Olivia steps in and tailors one of her dad's suits to fit Spencer. He tells Olivia that she's good at making people feel better. She shares some information about her dad and how he needs the team to do well to save his job. He finally has light in his eyes which he lost after his playing days were over. This was a nice moment between the two.

At the party Leila interrupts Spencer and Olivia as soon as they arrive. She says she's sorry if she's interrupting, and I loved Olivia's catty response of "Why stop now?" Spencer pulls Leila away and asks what her story is. Her dad travels a lot, and he points out that at least she knows where he is. Then she tells him that her mom died in a car accident two years ago. I didn't expect this and neither did Spencer. He seemed surprised. "You can come from anywhere and have a sad story." 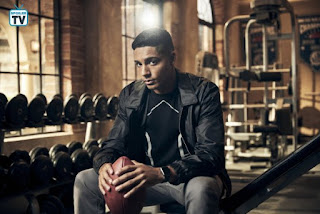 At the party Asher's dad confronts Coach Baker about replacing Asher with Spencer. Asher's the best receiver on the team. Asher apologizes and tries to get his dad to stop. But instead his dad tells everyone that Jordan was the reason Spencer's transfer was questioned. He tells Coach Baker that neither him nor Spencer belong at Beverly. Spencer tries to go after him, but Coach stops him. He's tired of walking away and begs Coach to let him play both defense and offense during the game. Coach Baker agrees as long as Spencer knows the entire play book by the next day.

Back at home Jordan explains to his dad why he did what he did. Jordan says that after the team won last week he saw his dad talking to Spencer, and just reacted. He was angry that his dad moved Spencer into their home without even asking. Coach Baker is disappointed, and Jordan says that he's always the disappointment. He throws his dad's words back in his face. "There's no one on this team with even half of Spencer's talent." Olivia then tells her dad that Jordan is desperate for his attention, and she needs him, too, but all of his focus is on Spencer right now.

Spencer goes to his house to read the playbook and gets upset when he learns his brother went to the comic book store with his "friend" Shawn. Spencer pays Shawn and visit and the two get into a fight, and Shawn pulls a gun on Spencer. Coop breaks up the fight and gets Shawn to leave. Spencer's worried about Coop spending time with this guy, but she doesn't want him to worry. "You cannot save the world, Spencer. You gotta save yourself."

Things do not go well for Beverly during the football game. Spencer looks confused during parts of the game and then the announcer comments that he may be getting tired playing both sides. Later Jordan thinks Spencer's hurt, but Coach Baker says Spencer's fine. The next play Spencer ends up fumbling the football. He's taken out for the final play, and they lose. After the game we learn that Spencer is a big banged up, and Coach couldn't risk him getting seriously hurt. He says he learned after this game that he cares more about Spencer than winning a game.

At Spencer's house he talks to his mom about losing the game and he's sorry. She tells him that he is more than football. She asked him to go to Beverly to give him a chance at a better life. So what if he lost a game. "You can't hold up the world on your own."

At the Baker's Coach apologizes to his family for not thinking about them when he moved Spencer into their house. Later they have dinner and tell Spencer there's enough for everyone, and Jordan does some apologizing, too. He was mad at his dad and took it out on Spencer. I do understand why Jordan was upset even though he definitely went about it the wrong way. It seems like Jordan and Spencer have forgiven each other, but we will see if this peace between them can last. 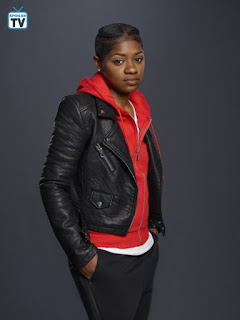 Near the end of the episode Spencer meets up with Coop, and they reminisce about how they met. I love that Spencer stood by his friend even as a kid. He's worried about her, but she assures him she has it handled. I thought it was so funny when they started joking with each other. Spencer tells her to shut up and she calls him stupid. Then they start laughing. This was great.

The episode ends with the same flashback at the beginning: Spencer playing football as a kid. And then we see Coach Baker in the background watching Spencer and his mom.

- When Olivia got into the car with Asher I completely thought he was going to get her to keep Spencer away from Leila. I definitely didn't think they were together! I was also surprised to learn that Olivia and Leila used to be best friends. I have to hand it to the writers: I did not see that coming. This just makes everything more interesting.

- I love the relationship between Spencer and Dillon. Dillon joking with Spencer and telling him to be careful and not fumble the juice was so cute. I want more of these moments.

- I don't like the path that Coop is going down. I'm worried about her getting caught up with the wrong crowd now that Spencer is at a different school. But, unfortunately, that's realistic. When Shawn said that they didn't have a way out like Spencer, it made me think of all the athletes I've heard say sports were their way out. Many players have said that if it wasn't for football or basketball they would have ended up with the wrong crowd. I'm interested to see how Coop's story plays out, but I'm rooting for her.

I loved this episode, and I hope everyone else if loving it, too. I think the cast is strong. The acting is good, and the stories are interesting, but also believable. I hope more people tune into All American.

What did you think of "99 Problems"? Why do you think Coach Baker was watching Spencer? Do you think Jordan is over his issues? How do you feel about Coop getting involved with Shawn? Discuss below!