In early 2019, Sex Education premiered and almost at once, became a little delight of a show. Funny, heart-warming, odd in the best ways, its premise had a unique enough variation on the usual high-school shows & depictions of sex crazed teens, that it felt fresh and surprisingly sweet. It getting renewed for a second season was an equally welcome announcement, and I was looking forward to spending more time with Otis, Eric, Maeve, and yes, Jean.

All things considered, season 2 is a mostly enjoyable follow-up...until the last episode, which kind of ruined the season for me, and has me questioning if I want to watch any more of this, considering the plots it's obviously trying to set up for a hypothetical (at least as of now) season 3. 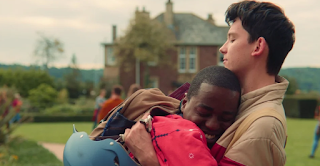 At the heart of the show, Otis and Eric's friendship remains a higlight, especially after how strained things got during season 1. They kind of remind me of Scott and Stiles from Teen Wolf, in that they can both be goofy and nerdy but always remain supportive of each other. It's heartwarming to see them laughing off the awkward teen stuff, talking about their respective relationships but never taking themselves seriously.

- Last night I looked at some cheese, and I got an erection.
- What type of cheese?
- Brie.

Speaking of friendships, I was not expecting to see Maureen get so much screen time and really come into her own as a person! Her dumping Principal Groff and fighting for what she deserves as a woman was empowering, but the most lovely part was her friendship with Jean. Them going dancing and confiding in each other was really enjoyable to watch, and I hope we get to see more of this in the future. (Hopefully no more wild 'small gatherings' thrown by Otis though). Jean's reaction when she discovered the state the house was in (and really, it's an exceedingly lovely house so I would have been pissed off too) was priceless. It's always the quiet kids who end up being the wildest! Too much pent up mischief to do at once, it's better to dole it out. 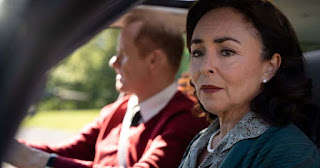 On that note, Mr Hendricks and Ms Sands doing dirty talk (if one can really call it that) was hilarious once it started, uh, working and Mr Hendricks turning her on by growling "Baba Ganoush" is now forever branded in my mind, so thank you for that. Other sex aspects that were dealt with were more on the (much) darker side though, as Amimee's main storyline showed. That kind of PTSD is an important subject to address, and it was well done in that she initially didn't feel like it was a big deal but the repercussions and backlash she got from it later on, really messed with her mind. I will say though, that it did feel like the writers were uselessly dumbing her down even more than during season 1. I've only seen season 1 once and that was a year ago, so it's entirely possible I'm remembering things wrong, but several times during season 2 I caught myself thinking that having Aimee be sweet but completely out of the loop as to what being a person, well, means, felt unecessary and cheap. I'm curious to see more of her relationship with her mother though, their dynamic seemed uneven, to say the least. 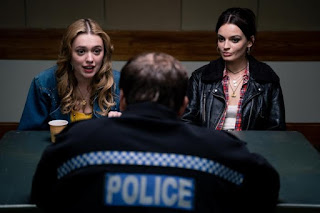 Which brings us to Maeve and her own disaster of a mother, brilliantly played by Anne-Marie Duff. She is perfectly cast here, unlike in His Dark Materials in which her casting made absolutely no sense as Ma Costa but hey, that's for another day. I wasn't naive enough to believe Erin was actually going to follow through and stay sober, but it was still hard not to hope, just like Maeve, that for once this was for real. I'm not sure Maeve calling child protective services (or whatever the fantasy Sex Education-land equivalent is) on her mother without even talking it over with her was the best plan, but I'm not an addiction expert so maybe that's the only way to do it and still protect Elsie.

It seems breakthroughs with parents were a theme this season because Jackson finally came clean about not wanting to swim anymore, even if it did take quite a serious injury and some strongly-worded arguing with both moms. He also made a new friend (for someone who is so popular you'd think he would be closer to some of those other jocks. But I guess the jocks wouldn't be friendly anymore if they knew he was contemplating not being on the team anymore, so this explains that), newcomer Viv, who was a breath of fresh air, despite her being attracted to possibly the most annoying student there (but hey, it happens even to the best of us). 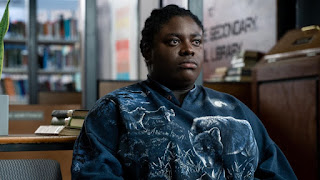 And for a show that's so focused on sex, its leads have a surprisingly little amount of it in the end, but Otis losing his virginity (I guess? Did he really in the end?) and not remembering it because he was so drunk he couldn't actually tell if it happened or not, felt appropriately messy and not a big deal in the end, whereas with Ola it was set up to be quite The Act. I wouldn't be mad if Ruby and Otis ended up getting closer (emotionally, that is. Physically they've pretty much been as close as you can get even if it didn't make a lasting impact on either of them!), the plan B scenes were actually pretty cute, and it was interesting to see Ruby in a setting other than the HBIC she is around her friends.

In other surprisingly endearing relationship news, Anwar and until then unseen (if I recall correctly) benevolent boyfriend were a particularly nice surprise. It did bring a hilarious Douching 101 scene from Rahim, too, and you really can't put a price on that.


The Not So Good


Remember how much of a bully Adam was in season 1? Season 2 does a great job at giving him a redemption arc and transforming his previously violent ways of dealing with stuff he didn't quite understand. What Season 2 doesn't do well though, is breaking up Eric and perfectly great boyfriend Rahim, in front of the whole school, because Adam suddenly realizes Eric deserves to be held hands with in public and not on weird little midnight strolls in junkyards. Granted, new French student Rahim (who barely has an accent by the way, when he first came on screen I had to wonder if I'd misread the casting news) doesn't get much in the manner of character development, or character at all, really. But he's comfortable with who he is, confident, he puts Eric first and isn't afraid to ask for what he wants and commit. Basically the exact opposite of Adam, who's somehow retconned by Eric's family as being "what he needs, to be himself" as opposed to Rahim? Based on what, exactly, laughing at a badly made flyer? That made no sense, and Eric dumping Rahim so publicly for Adam, of all people, was pretty hard to watch. Adam has barely come to terms with who he is, and now we're expected to believe he's ready for a fully fledged relationship, amidst his parent's divorce and oh right, not having any kind of future planned? 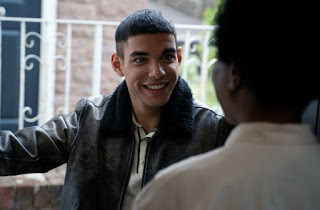 Actually, that whole Shakespeare play sequence was a bust from beginning to end, no wonder Rahim didn't want to go (which we're also supposed to take as a sign of him not being a good fit for Eric but actually, even though he had no interest in it he went just because it made Eric happy! What's more important, identical tastes, or being treated well?). Back to the play though, we get it, it's a reinterpretation, good on Lily for writing & directing and all that but did we need to watch what felt like 20mn of it in the midst of a season finale? No, no we did not. This reminded me of the neverending musical in Gilmore Girls: A Day in the Life which I skipped over even the first time I watched the revival, and this is saying something when you've managed to get through Kirk's short film more than once. I'm really glad Jackson pushed through his fears and actually did something he liked, compared to the mandatory swimming, but this was not it.

Just as I thought the finale couldn't get any worse, it switched back to Jean who was having a variety of symptoms that surely she should have been able to recognize? Her GP telling her that she herself had ended up in the hospital for an un(self)diagozed kidney infection should not have been source of reassurance but rather an alarming wake up call to find a new practitioner! In any case, I never expected to see a storyline from Grey's Anatomy makes it way onto Sex Education, and yet here we are. Is this the new pregnancy trope, pre-menopausal women finding out they're pregnant, instead? If so, can we make it stop immediately? Watching Jean struggle with the decision of maybe getting back with Jakob, especially now that she has Otis' blessing, would've been tiresome enough since she's clearly not quite ready to commit, but having them forced back together by this, when they're both pretty much done with the parenting side of their lives, isn't something I want to see. 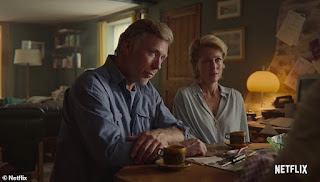 Back to the (originally) main theme of the show, it took Otis a while to agree upon reopening the sex clinic, and while the "cases" were entertaining, it didn't have quite the same appeal as in season 1, especially when Jean starts doling out (real, and free) advice to the kids and points out to Otis that he shouldn't have been doing this at all. Now, this is debatable because until she set up her afterhours services, the students were in dire need of actual advice when it comes to sex. That said, while Otis is pretty good at the emotional aspect of things, he's considerably less able when it comes to the physical side, especially when you take into account his own difficulties with Ola. Their relationship never feels like it should've become anything more than friendship, and Ola has so many more interestings thing about her than her ill-placed affection for Otis that it felt like a shame to let it go on for so long. 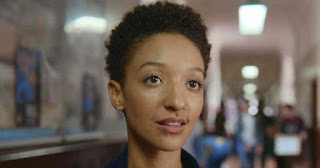 That said, her relationship with Lily isn't (initially) delt with any better. Lily's sudden aloofness after Ola kisses her feels completely out of character and unnecessarily contrived to create pointless conflict. But Ola's friendship with Adam (kind of) makes up for it and I'd like to see more of that, please and thank you.

And don't get me started on the whole Maeve-Otis-Isaac disaster because it makes my blood boil. Really dude, deleting a message from Otis where he tells Maeve he's proud of her and has always been in love with her? I'm not saying I want Maeve and Otis together, it kind of feels like that ship has sailed. But again, the contriveness of it all... it's tiring.

All in all, it was a pretty good season whose finale did it a big disservice, which is a shame because it could've gone in so many more fulfilling directions. I'm not going to lie, I will probably end up watching season 3 if only because Sex Education's little world feels comforting in a way few fictional towns do, and its lush greenery make me want to move there every time we get a glimpse and Otis and Jean's terrace. The fact that the season always seems to be a soft, muted summer, doesn't hurt, either.

What did you guys think? Were you satisfied with where everyone ended up or did you feel like some of the characters basically had the same paths/struggles as during season 1? Sound off in the comments!