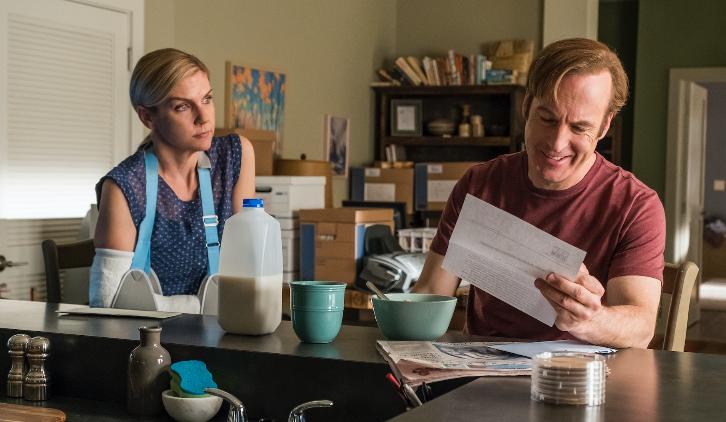 Tony Dalton Cast as Lalo, Character from the World of Breaking Bad
The Better Call Saul team revealed that Tony Dalton will play Lalo, a character never seen but referenced in the season two episode of Breaking Bad that introduced the world to Saul Goodman (Bob Odenkirk). As Saul knelt over a grave dug by Walt (Bryan Cranston) and Jesse (Aaron Paul), he screamed that it was Nacho (Michael Mando), not him — and asks Walt and Jesse if Lalo sent them. It's a seemingly throwaway line fans have long speculated would show up in Saul.

"You are going to meet people who are referenced in Breaking Bad but you've never met," said Odenkirk, after which co-creator Peter Gould screened that Lalo scene from Breaking Bad to the Hall H crowd as a way to remind people. Then they showed off the first photo of Dalton in character, bending down to speak to a wheelchair bound Hector Salamanca (Mark Margolis).

You Were a Lawyer Trailer

Better Call Saul to Feature Scenes Set During Breaking Bad
“We have a subplot that very squarely gets into Breaking Bad territory and brings us into the world — or at least points us on a path toward the world of Walter White and the territory of Walter White,” co-creator Vince Gilligan tells EW. “I can’t wait for folks to see that.”

Jimmy puts a risky plan into motion; as alliances shift, Nacho finds himself in the crosshairs; Kim contemplates her future.

A restless Jimmy embarks on a new endeavor while Mike burns bridges; Kim pursues her bliss; Nacho tries to survive a turf war. 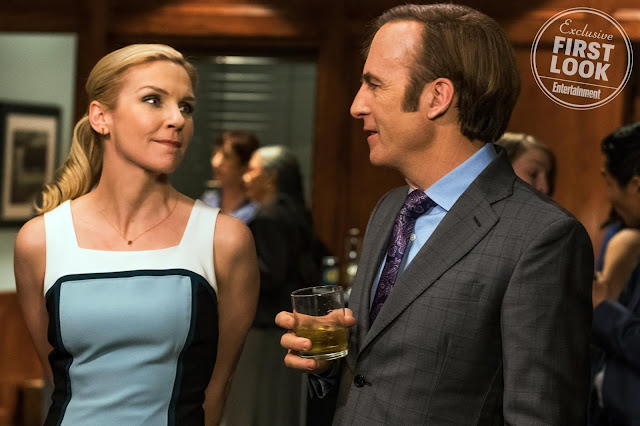 Whose paths will cross? The new season of #BetterCallSaul premieres August 6th at 9/8c on AMC pic.twitter.com/joCpDdWawV

New Teaser Promo - You Wanted Me to Talk

You can always count on Mike to do his job. We can't say more. New season starts August 6th. pic.twitter.com/3pHC7JkDlj

Breaking Bad Reunion Photos
I thought some of you might be interested in if you haven't already seen, the 10th-anniversary reunion photos of the cast of Breaking Bad. Thought it might be fitting since this is the prequel to that popular series per Entertainment Weekly. If you aren't interested in them, sorry.

“Yeah, b*tch!” It’s a #BreakingBad reunion!
We caught up with the full @BreakingBad_AMC cast 10 years after the show first aired to revisit high times from the groundbreaking drama: https://t.co/8kHvgDTYT0 #BreakingBadReunion pic.twitter.com/O1AmiofECu 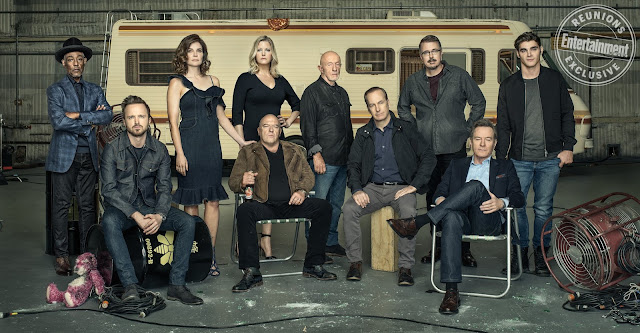 Teaser Promo
Thanks to Alienware for the heads up.

NEW YORK, NY – May 31, 2018 – AMC announced today an August 6 premiere date for its original series “Better Call Saul” and “Lodge 49.” Season four of the critically acclaimed and Emmy®-nominated “Better Call Saul,” produced by Sony Pictures Television, will air Monday, August 6 at 9:00 p.m. ET/PT immediately followed by the series premiere of “Lodge 49” at 10:00 PM ET/PT. Both series will have a presence at the ATX Television Festival, taking place June 7-10 in Austin, Texas, including a panel with “Better Call Saul” executive producer Vince Gilligan and star Bob Odenkirk, and a sneak peek screening of the “Lodge 49” premiere followed by a panel with stars Wyatt Russell and Brent Jennings and executive producers Peter Ocko and Dan Carey.

“Monday nights have become a destination for our character-driven dramas, and we loved the idea of pairing these two series, which are similar in their darkly comedic tone and led by two charming yet complicated characters facing huge life moments,” said David Madden, president of original programming for AMC, SundanceTV and AMC Studios. “We’re excited to share the next chapter in Jimmy McGill’s journey towards Saul on one of television’s most celebrated shows, and to introduce viewers to the unfailingly optimistic underdog Dud, who’s looking for his place and his moral purpose in a cynical and confusing world.”

In “Better Call Saul’s” fourth season, Chuck’s death catalyzes Jimmy McGill’s (Odenkirk) transformation into Saul Goodman. In the wake of his loss, Jimmy takes steps into the criminal world that will put his future as a lawyer – and his relationship with Kim (Rhea Seehorn) – in jeopardy. Chuck’s (Michael McKean) death deeply affects former colleagues Howard (Patrick Fabian) and Kim as well, putting the two of them once again on opposite sides of a battle sparked by the Brothers McGill.

Meanwhile, Mike Ehrmantraut takes a more active role as Madrigal Electromotive’s newest (and most thorough) security consultant. It’s a volatile time to be in Gus Fring’s employ, as Hector’s collapse sends shock waves throughout the Albuquerque underworld and throws the cartel into chaos — tearing apart both Gus and Nacho’s well-laid plans. While Gus changes course, Nacho finds himself in the crosshairs of deadly forces.

“Lodge 49” is a light-hearted, endearing modern fable set in Long Beach, California about a disarmingly optimistic local ex-surfer, Dud (Russell), who’s drifting after the death of his father and collapse of the family business. Dud serendipitously finds himself on the doorstep of a rundown fraternal lodge, where a middle-aged plumbing salesman and “Luminous Knight” of the order, Ernie (Jennings), welcomes him into a world of cheap beer, easy camaraderie and the promise of Alchemical mysteries that may — or may not — put Dud on the path to recover the idyllic life he’s lost. Jim Gavin (Author, Middle Men) serves as creator, writer, and executive-producer alongside showrunner Peter Ocko (Pushing Daisies, The Office). Additional executive producers include Paul Giamatti (“Billions,” Sideways, Outsiders, Hoke), Dan Carey (Outsiders, Hoke, John Dies at the End, All Is Bright) and Jeff Freilich (“Halt and Catch Fire,” “Grace and Frankie”).