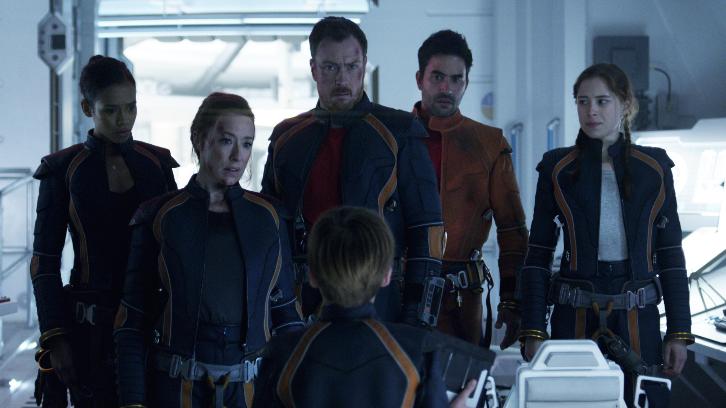 The first evidence of an alien intelligence. #LostInSpace pic.twitter.com/7jLpgjO6RA

Lost in Space? is a Netflix Original dramatic and modern reimagining of the classic 1960’s science fiction series. Set 30 years in the future, colonization in space is now a reality, and the Robinson family is among those tested and selected to make a new life for themselves in a better world. But when the new colonists are abruptly torn off course en route to their new home, they must forge new alliances and work together to survive in a dangerous alien environment, lightyears from their original destination.

The Robinson family, part of a highly trained mission to establish a new colony in space, is unexpectedly pulled off course forcing them to crash land on a lost planet.

The Robinsons start to adjust to life on a new planet following their crash landing, but unbeknownst to them, they’re not the only colonists to have survived. A terrifying storm threatens everyone’s safety.

When the Robinsons discover that the Jupiter 2 has a major fuel leak, they must act quickly to free the ship with any remaining power before the glacier collapses around them. Light is shed on Dr. Smith’s (PARKER POSEY) mysterious past.

John (TOBY STEPHENS) and Maureen (MOLLY PARKER) make a surprising discovery, explaining why they haven’t been able to make contact with the Resolute. Judy (TAYLOR RUSSELL) learns the truth about the Robot's mysterious past and forces Will (MAXWELL JENKINS) to make a difficult decision. Meanwhile, Dr. Smith (PARKER POSEY) is ready to launch a plan of her own.

The survivors work together to build a massive light tower to send a signal to the Resolute, but the Robot is noticeably absent from the group. Dr. Smith’s (PARKER POSEY) plan takes shape as she feels her time on the lost planet is running out. Maureen (MOLLY PARKER) makes a daring discovery.

Not wanting to panic the others, John (TOBY STEPHENS) and Maureen (MOLLY PARKER) quietly grapple with her discovery, but Penny (MINA SUNDWALL) overhears their conversation and is anxious to share her secret. Will (MAXWELL JENKINS) learns a valuable lesson as he takes responsibility for the Robot’s actions, and Judy (TAYLOR RUSSELL) accompanies Don (IGNACIO SERRICCHIO) on a critical search for fuel that turns treacherous. Dr. Smith (PARKER POSEY) manipulates a vulnerable situation into one that could prove deadly.

Judy (TAYLOR RUSSELL), and Don (IGNACIO SERRICCHIO) race home across the desert with their precious cargo, but an accident pressures them into making a life-changing decision. John (TOBY STEPHENS) and Maureen (MOLLY PARKER) are dealt a heavy blow when their vehicle gets stuck in a tar pit and they're forced to confront their past transgressions. Penny (MINA SUNDWALL) does her best to comfort Will (MAXWELL JENKINS).

Just as Maureen (MOLLY PARKER) and John (TOBY STEPHENS) start to rebuild their relationship, the Robinsons are pulled apart again when John volunteers to undertake a risky mission. Tensions run high as family members do their best to prepare him – everything comes down to this moment, their only chance at survival. But Dr. Smith (PARKER POSEY) has another plan that tests even her manipulation skills.

The Robinson children are forced to come to terms with the fates of their father (TOBY STEPHENS) and Don (IGNACIO SERRICCHIO). Will (MAXWELL JENKINS) and Penny (MINA SUNDWALL) seek out an unconventional energy alternative that could power the remaining Jupiters to launch into space, and Judy sets out to find Maureen (MOLLY PARKER) who has been taken captive by Smith (PARKER POSEY). But Smith won’t let her go easily.

The Robinson family scrambles to launch their Jupiter from the Lost Planet, stage an impossible rescue, and reach the Resolute before it leaves orbit for good. Unfortunately, Dr. Smith (PARKER POSEY) and the Robot have other plans.

Character Descriptions
JOHN ROBINSON?, the dad and seasoned combat veteran with the self-possessed strength of a born leader. When the family's spaceship crash-lands on an unknown planet, he maintains a goal-oriented attitude. We see he and his wife draw together in this emergency, but the truth of their relationship is they’re estranged.
John insisted that he come along to protect his family from the unknown dangers they might face. This is a chance to make up for the mistakes he’s made in the past, and earn a place back in the family. Faced with difficult decisions that test even him, John must face one potential disaster after another (most of them involve trying to find the lesser evil).

MAUREEN ROBINSON?, the mom and an aerospace engineer with a fearsome intellect. A driven and demanding woman both in and outside her home, it's Maureen who makes the decision to bring her family into space. She wants her children to have a chance at a new life on a better world. Her endless determination is infectious. She’s convinced there is no problem that can’t be solved if you apply your mind to it. But there are things she can’t just fix like they were some engineering problem. It will be up to her to figure out a way off this planet, but as big a challenge will be to forgive her husband and rekindle the love they once had.

JUDY ROBINSON?, the oldest of the three Robinson children. Judy is Maureen's biracial daughter from her first marriage. Athletic and confident, her edge comes from her willingness to push herself harder than anyone else. She never knew her biological father, and John adopted her as his own. She took her parents' breakup harder than anyone, and resents John for it. She’s the only trained doctor amongst the surviving Colonists and in a coming of age journey, she finds herself struggling to live up to her responsibilities.

PENNY ROBINSON?, the middle child in the family. Penny is quick-witted and contrarian, but her sarcastic and tough exterior covers a romantic soul. If the Robinsons have a black sheep, she’d be it. She’s the most social person in her family, with the best sense of humor of any of them. Penny grew up the victim of middle-child-syndrome, caught between a superstar older sister who could do no wrong and a baby brother who everybody was afraid couldn't do anything right. She didn't want to leave her home on Earth, and
struggles with the loss of everything and everyone she knew.

WILL ROBINSON?, the youngest. Will is creative, empathetic, and naturally sensitive – and the smallest and weakest member of the family. He is likeable, quick and curious, but not confrontational. He was picked-on growing up and didn't have many friends making him eager to pack up and leave Earth and go just about anywhere. Will suffers from panic attacks, and doesn't want to be the one who lets down his family. After the family crashes, Will has to find courage he never thought he had. This unique boy, who wasn’t supposed to be there, will prove to be the key to everyone’s survival.

DR. SMITH?, a mysterious woman and an enigmatic x-factor. She is part villain, part anti-hero, compelling, charismatic and treacherous. As a stowaway and possibly a saboteur, she is definitely a born trouble-maker. She's unnervingly calm during the disaster that results in everyone becoming lost in space. Stranded along with Don West and the Robinson family, she's a master manipulator, always working one side against the other, thinking three moves ahead to achieve her mysterious ends.

DON WEST?, he’s no colonist. He’s a well-paid roughneck, part of a sub-class of highly-skilled, but blue collar contractors. He also smuggles in luxury goods on the side. A roguish exterior hides a heart of gold. Once he finished his contract, he’d have been on the next trip back home with enough money to set himself (and those he loves) up for life. He has a cynical view of the colonization of space. They say it's an egalitarian brave new world, but people like him would never be allowed to live there. Now that he's crashed along with "the elites," he's going to have to forge new alliances, and find in the Robinsons, the family he never thought he'd have.

ROBOT,? a sentient automaton who becomes Will's loyal servant... and in the end, friend. An intimidating amalgam of shapeshifting alien metal and organic thought patterns, it towers above its human wards on the planet. But like many characters in this series, Robot contains many mysteries yet to be revealed.

Promotional Poster
Thanks to Pawe? for the heads up.

Teaser Promo
The Robinson family, part of a highly trained mission to establish a new colony in space, is unexpectedly pulled off course forcing them to crash land on a lost planet. Lost in Space premieres April 13, 2018.

Key Art
Thanks to Jweww for the heads up.