Spoilers ahead: Please don't read until after you have viewed the episode!

After all of the criticism last week's episode, "Rogue," received, I was hoping for an episode this week that would bounce Room 104 back to the greatness it deserves to ascend to - and previously has. Sadly, Room 104 3x05 Drywall Guys goes in a frivolous direction and ends up with a serviceable,  well-cast and directed parable, but forgettable comedic episode.

Male bonding can sometimes serve as a the catalyst for a number of comedic situations and the odd couple in Drywall Guys are no exception. Yes, we have a "neat" one (Veep's Sam Richardson) and a "slobby" one (Eastbound and Down's Steve Little). They have no reason to be in the same room together, except to save money on lodging. They are not lovers and don't even really like each other (or maybe have talked themselves into thinking that they like each other). There is nothing new here. Most of us have seen this story before. Granted, it didn't involve a severed foot and/or sleepwalking, but the humor offered here is a welcome relief after the last few weeks of unrelenting dread.

Directed by Welcome to Me's Shira Piven from a script by Marc Duplass, "Drywall Guys" often feels like a fully realized version of an unfinished draft of a one act play script. What works is the tone and mood. The obtrusive narration helps the episode achieve a certain disapproving archness in the humor. The actors work hard to achieve a particular emotion that makes us care about the characters more than we really should. It is clearly a parable and doesn't pretend to be otherwise. It is the shortest episode of the season so far, but that actually works in its favor. These are not characters I would want to watch any longer than I would have to.

We get immediately that "nice boy" Greg wants to get away from chronic sleepwalker and perfectly named Randy...and for good reason! No randy doesn't exactly shatter any negative stereotypes about unambitious sleepwalkers here. Randy is a detestable character, but Mr. Little plays him with the same dignity he gives his other "Average Joe" type characters. This keeps us from despising Randy more than Greg already does. When Greg calls Randy on his entitled and unreliable behavior, Mr. Little plays Randy's reactions like he has better things to do than the right thing. This shows a lack of emotional development on the part of the writing. By the time we get into the real...um...meat of the story, we have made up our minds about both characters.

When it is suggested that Randy might have murdered a woman while sleepwalking, it feels more "aw shucks" than disturbing. You have so little respect for Randy, that it almost feels like watching an innocent murdering an animal in the woods and regretting it later. Randy is too emotional to be completely unlikable. He clearly wants Greg as a (platonic) companion, which is about as close to emotional development here as we are going to get. Yes, Greg snaps out of his nice state to lash out as Randy as his true feelings begin to seep out, but even he knows when to put trivial feelings aside to help those in need.

It seems both characters cannot get out of their lifelong behavior patterns they developed as children. They are as stuck in their emotions as they are this dead end temp job that brought them to the motel room. One is repressed while the other is just hopeless. But everyone deserves help when they need it and using your drywall skills to hide the evidence of a murder (interesting how these characters who hide objects in wall cavities never worry about overwhelming odors) is the perfect framing device to create the parable structure. T

he fact that the narrator has to explicitly state the theme of the story shows that the episode is not interested in hiding it under layers of subtext and metaphorical twists. Sometimes a rose really is just a rose, but this pitch-perfect comedic tone just serves to whet the appetite for those of us who prefer the heavier Room 104 episodes like its wonderful season opener. They may not be perfect, but at least they don't try to strangle you like a neanderthal for approaching them when they are asleep at the wheel.

Yes, nice boys have their limits, but so do late night HBO anthology episodes. 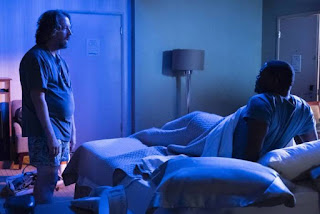