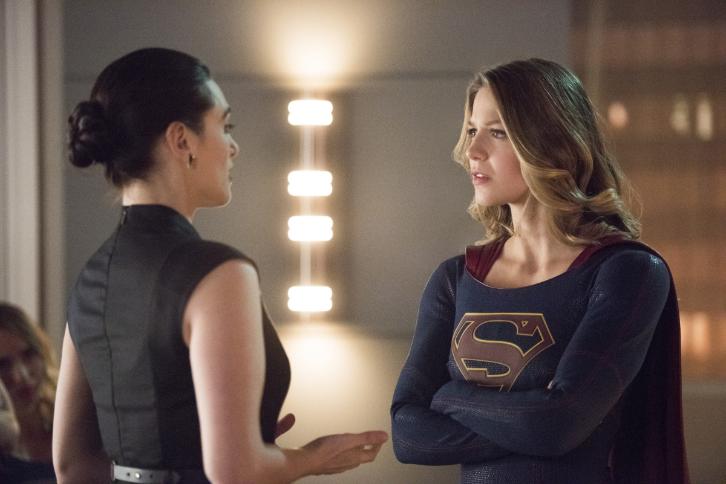 
Sneak Peek 3
Thanks to Silverbow for the heads up.

Sneak Peek 2
Thanks to everyone who sent this in.


Sneak Peek
Thanks to Silverbow and Ivan for the heads up.


Promotional Photos
Thanks to JuliaSk for the heads up.

SNAPPER CARR INTERVIEWS SUPERGIRL – As Alex (Chyler Leigh) searches for Jeremiah (guest star Dean Cain) and Kara (Melissa Benoist) investigates a series of alien kidnappings, the sisters realize they must break the rules to foil a new Cadmus plot. In an effort to get Snapper Carr (guest star Ian Gomez) to run a story that would help her stop Cadmus, Kara agrees to set up an interview between Snapper and Supergirl. Michael Allowitz directed the episode written by Paula Yoo & Eric Carrasco (#215). Original airdate 3/6/2017.


How will Alex handle her father’s betrayal?

Not well. (Read: Alex’s interrogation methods led to producers going several rounds with Standards and Practices.) Suffice it to say, Alex will be going to a very dark place. “The question of where do Alex’s loyalties lie plays a major part of the next episode,” Kreisberg says. “Battle lines are drawn a little bit, which is interesting because what I love about this episode and the next episode is no one’s really wrong, in a way. Whether it’s Mon-El or Kara or Alex or J’onzz — especially the stuff between J’onzz and Alex in 15 — everyone is doing it because they love each other; even Jeremiah. Everyone is doing what they’re doing out of a sense of love and to keep the people that they love safe.” In this case, it sounds like Alex will find support in Maggie, as next week’s episode includes some Sanvers bonding. “Alex and Maggie go rogue next week,” Kreisberg says.

That bond doesn’t mean total smooth sailing ahead for Alex and Maggie. “There’s an obstacle episode coming up that we just did,” Kreisberg says. (Perhaps he’s referring to this?) “Then there’s what’s probably my new favorite episode, that [Chyler] doesn’t even know about yet, that is a Kara/Alex/Maggie story, that’s sort of a ticking-clock story. Alex is in serious trouble, and it’s up to Kara and Maggie to save her. It becomes a story about the sister and the girlfriend [who] both love her and are debating the best way to save her. It’s a really great story. We’re really excited about it.”