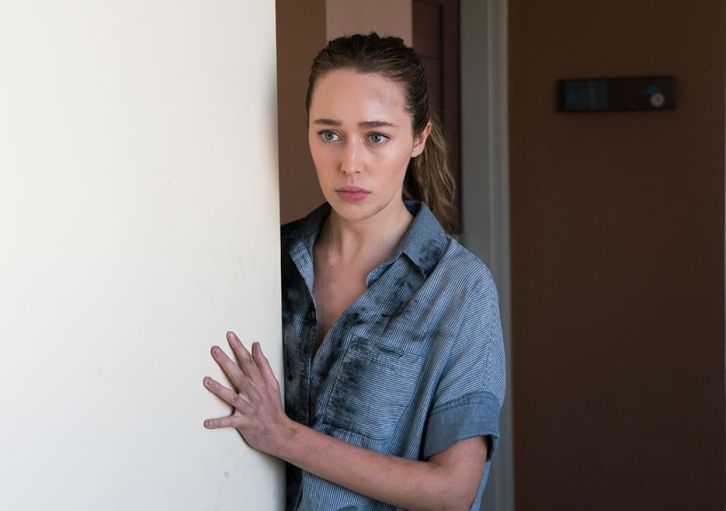 Here are some new promotional photos.

Nick's steadfast search for answers leads him into a deadly dog-eat-dog landscape. A dark piece of his past is uncovered.


ENTERTAINMENT WEEKLY: Okay, let’s start with Daniel, who lights the whole place on fire, and the last time we see him is surrounded by flames. Safe to assume he is dead, or not?

DAVE ERICKSON: We don’t see Daniel burn, and that’s intentional. I think what’s important at the end of the midseason is that it’s the impact on Ofelia and the rest of the characters that Daniel’s gone. That’s going to spin Ofelia specifically in a new direction for the back half. From my perspective, in terms of the arc of the show, this is not the last we see of Daniel Salazar. He will be done for the season. We won’t be seeing Daniel in the back half, but my hope is we will see the return of Daniel in season 3.

Wow, big news there, then. It’s interesting because when I watched that scene, I was like, “Well, this guy’s a goner.” But you know the adage: If you don’t see someone actually die on a show, there’s always that question mark still out there.

Absolutely. Liza’s a very good example. That obviously was a death and it was concrete, and we saw her body at the end of last season, and again at the top of this season, and it was very much about the impact that was going to have on Chris and Travis and the rest of the group. In the instance of Daniel, his story’s not done. And what’s great about this is it gives some degree of closure for the first half of the season. It gives the story of Daniel reconciling and trying to find some kind of redemption for the crimes he’s committed — that’s really the end point for that, and he finds that through the ghost of Griselda, essentially.

Source:
Read More on EW
DEADLINE: Speaking of connecting and besides the obvious fact that they are out of L.A., on the sea and now in Mexico, how has having a 15-episode Season 2 changed the story of these West Coast survivors?

HURD: Obviously we can delve far more deeply into characters, and we can cover a lot more territory geographically, as you’ve seen in these first episodes of Season 2. But most importantly, because we once again, like in The Walking Dead, have a large cast, we really get to know them all. And we get to find out how the zombie apocalypse has affected each one of them, and examine the theme of the season, which is blood versus bond.