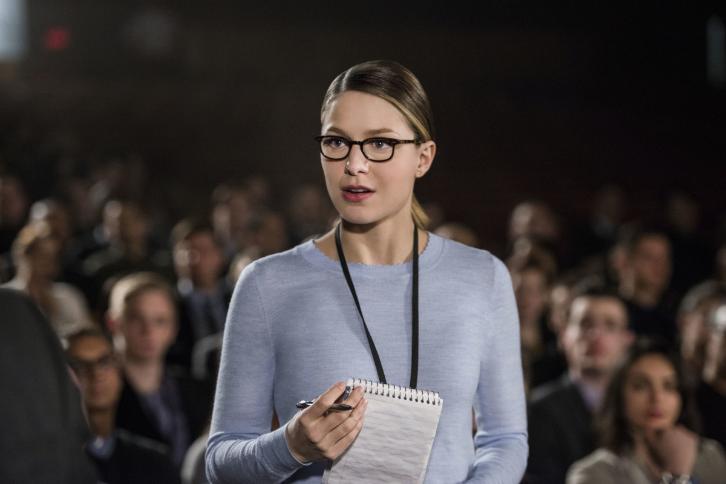 
Inside the Episode
Thanks to sonofgod87 for the heads up.


New Promo [LQ]
Thanks to Phun and Ivan for the heads up.

CLEARER video and audio of the NEW PROMO FOR SUPERGIRL 2x18 - "ACE REPORTER" from @etc_channel in The Philippines! pic.twitter.com/2WNAWC2VGd

New Promo
Thanks to Phun and MM for the heads up.


TVLINE | It sounds like a big episode for you.

It is, actually. What’s nice about it is you’re getting quite a bit of backstory for me as a character. You haven’t really seen storylines for Lena outside of her being a Luthor and all the stories to do with her family…

TVLINE | What’s your dream casting for Lex? If Katie McGrath could grab anybody to play Lex for one episode….

One episode? Bruce Willis, the most amazingly, good-looking, bald man there ever is.

“IZOMBIE’S” RAHUL KOHLI GUEST STARS – Lena’s (guest star Katie McGarth) ex-boyfriend, Jack Spheer (guest star Rahul Kohli), comes to National City to unveil his big breakthrough in nano-technology, which has the potential to eradicate all diseases. Lena asks Kara to attend Jack’s conference with her for support. When Kara sees Snapper (guest Star Ian Gomez) in attendance she’s inspired to tap back into her reporter skills and questions Jack on his discovery, which ultimately leads to a bigger investigation that puts everyone in danger. Armen V. Kevorkian directed the episode written by Paula Yoo & Caitlin Parrish (#218). Original airdate 4/24/2017.