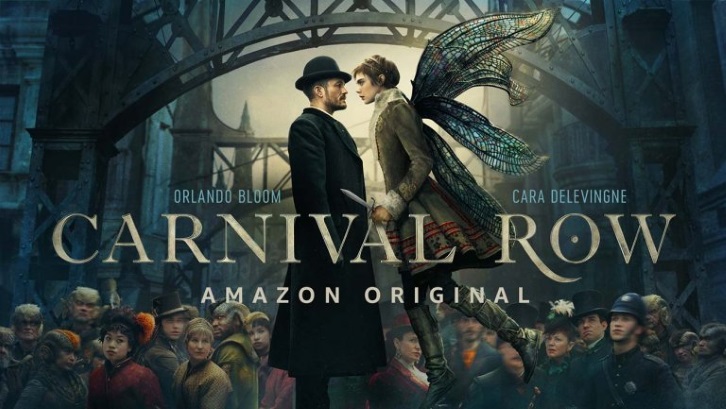 Rycroft “Philo” Philostrate (Orlando Bloom) investigates “Unseelie Jack” (Matthew Gravelle), a mysterious assailant with a grudge against the fae. Vignette Stonemoss (Cara Delevingne) barely escapes Tirnanoc with her life and arrives in The Burgue looking for a fresh start. Imogen Spurnrose (Tamzin Merchant) meets her new neighbor. In Parliament, the fight over the critch heats up.

Episode 3: Kingdoms of the Moon

Once, as a Burguish soldier, Philo (Orlando Bloom) was tasked with protecting a faerish mimasery. While The Pact bears down on them, Philo meets Vignette (Cara Delevingne) and finds love in the most unlikely of places.

Episode 4: The Joining of Unlike Things

Philo (Orlando Bloom) investigates the murder of his childhood headmaster. Vignette (Cara Delevingne) ingratiates herself into the Black Raven. Imogen (Tamzin Merchant) hatches a plan to help her brother. Breakspear (Jared Harris) goes on the offensive with Longerbane (Ronan Vibert).

Philo (Orlando Bloom) consults a Haruspex in an effort to find clues about the killer. Vignette (Cara Delevingne) grows closer with her newfound family. Upon Jonah’s (Arty Froushan) return home, his parents cast a more watchful eye over him as a new player makes a splash in Parliament. Imogen (Tamzin Merchant) brings Agreus (David Gyasi) into her circle.

The pieces of the puzzle start to come together for Philo (Orlando Bloom). Vignette (Cara Delevingne) finds home in a place she never expected. Jonah (Arty Froushan) sneaks off to see someone he shouldn’t. Imogen (Tamzin Merchant) and Agreus (David Gyasi) step out together in public.

Episode 7: The World to Come

Because he withheld evidence from his fellow detectives, Philo (Orlando Bloom) is accused of being the man behind the string of murders and is thrown in jail. There, he finds some unexpected help from Vignette (Cara Delevingne). Elsewhere, Ezra (Andrew Gower) takes exception to Imogen’s (Tamzin Merchant) relationship with Agreus (David Gyasi). Sophie (Caroline Ford) offers Jonah (Arty Froushan) a deal.

As tensions rise on Carnival Row, Philo (Orlando Bloom) must confront both darkness incarnate and the evil that controls it. Vignette (Cara Delevingne) gleans the true nature of The Burgue. Imogen (Tamzin Merchant) lets her feelings for Agreus (David Gyasi) go unbridled. Breakspear's (Jared Harris) secrets catch up to him.

Amazon Original Carnival Row Will Be Available Initially in the Original Version in More Than 200 Countries and Territories on August 30, With Dubbed Foreign Language Versions Coming Later This Year

Bloom (Pirates of the Caribbean) and Delevingne (Suicide Squad) star in Carnival Row, a series set in a Victorian fantasy world filled with mythological immigrant creatures whose exotic homelands were invaded by the empires of man. This growing population struggles to coexist with humans — forbidden to live, love, or fly with freedom. But even in darkness, hope lives, as a human detective, Rycroft Philostrate (Bloom), and a refugee faerie named Vignette Stonemoss (Delevingne) rekindle a dangerous affair despite an increasingly intolerant society.

Vignette harbors a secret that endangers Philo’s world during his most important case yet: a string of gruesome murders threatening the uneasy peace of the Row.

Joining Bloom and Delevingne, the series also stars David Gyasi (Interstellar) as Agreus, a mysteriously wealthy faun who moves into an affluent human neighborhood in defiance of the social order, Karla Crome (Under the Dome) as Tourmaline, a quick-witted faerie poet driven from her war-torn homeland, Indira Varma (Game of Thrones) as Piety Breakspear, the regal and cunning matriarch of the powerful family that rules the city of The Burgue, and Tamzin Merchant (Salem) as Imogen Spurnrose, a young woman who sees in Agreus an opportunity to turn her aristocratic family's fading fortunes around.

Carnival Row is from Legendary Television, with executive producers Marc Guggenheim (Arrow, Eli Stone), René Echevarria (Star Trek, Teen Wolf, Castle, Medium), Jon Amiel (Outsiders), Bloom, and Travis Beacham (Pacific Rim, Clash of the Titans). Beacham’s A Killing on Carnival Row, on which the project is based, appeared on the very first installment of the Hollywood Blacklist in 2005. 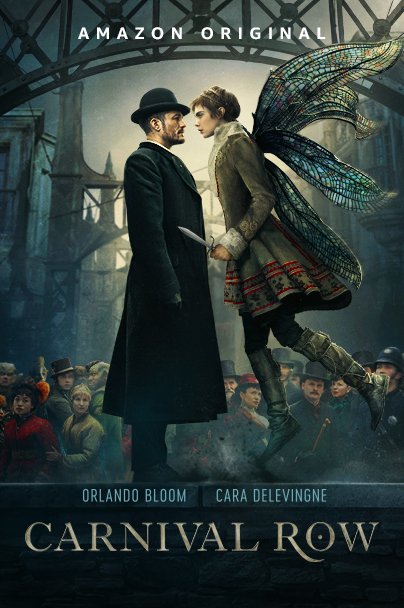