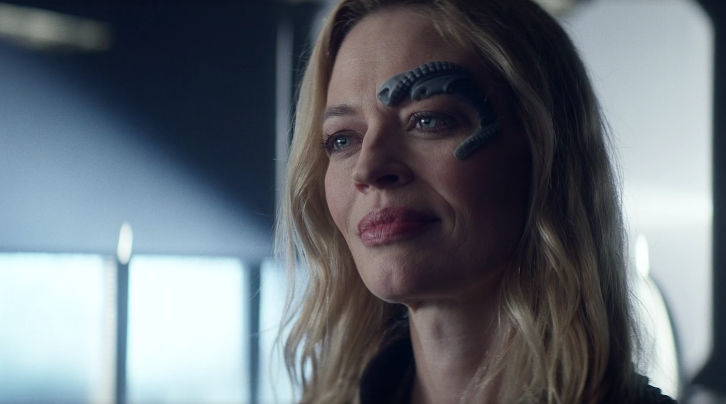 Fans eagerly awaited the return of Star Trek: Voyager fan-favorite Seven of Nine from the moment it was announced that Jeri Ryan would be returning to the Star Trek franchise. Her arrival did not disappoint. Bringing a new humanity and drive to the former Borg, Ryan delighted long-time fans and gained many more with an incredibly passionate and driven performance of a different Seven of Nine in Star Trek: Picard – Stardust City Rag. It may have been twenty years since she last played the character, but Ryan did not miss a beat. For her impassioned performance Jeri Ryan was selected the SpoilerTV Staff Choice Performer of the Month for February.

Continue reading below to find out our thoughts on the episode. After reading, please leave your own thoughts in the comments. 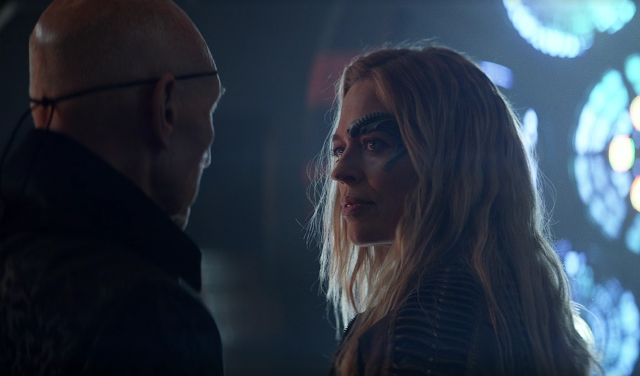 One of the highlights of the episode was a quiet conversation between Seven of Nine and Picard (Patrick Stewart) about regaining their humanity following their deassimilation from the Borg. Do you think Seven has regained her humanity? How has her struggle towards that shaped the person she is now?

Donna: Seven has had a hard road since being deassimilated but that has not dampened her quest for regaining her humanity. She’s made significant strides in her journey. Sadly, in regaining that humanity she has experienced all the ups and downs that go with it. She’s had joy, sorrow, disappointment and anger, but she keeps moving forward. Her problem now is that she is struggling with all she’s had to experience to regain that humanity. There is a great deal of humanity in her including her need for revenge for the death of Icheb (Casey King).

Bex: Seven’s arc has always been about her regaining her humanity. She started to regain it the moment her Borg implants began being rejected by her body on board Voyager. In Picard we meet a Seven who’s more at ease with her humanity than ever, who has kept changing in the time between when we last met her and now, who has been shaped by loss and trauma, by emotion, into who she is now. To say she’s regained it comes down to how we define humanity. She is human, and she can love, and hate, now. There is compassion in her, something we saw most recently in the mercy killing of Icheb. I believe Seven has regained it, although she may not fully believe that, and will backslide, and working through trauma and finding peace with her past and actions are all potential storylines for this character and her adventures in humanity.

Zandarl: Looking back on old Star Trek: Voyager’s episodes there certainly seems to be a lot more humanity in Seven. From inflections in her speech to body movements and sentiments shown towards others, ‘The Doctor’ certainly would be pleased. I would only imagine it has been an endless struggle given the nature of her formative years at the hands of the Borg. Ryan’s performance is telling us there has been a lot going on since we last saw this character and I only hope we get more of an insight in future episodes. 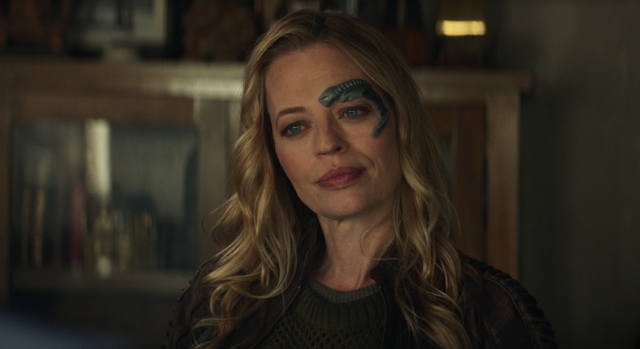 Seven of Nine is an iconic Star Trek character. How easily did Jeri Ryan step back into the role? What did she bring to this performance to satisfy long time Star Trek fans but also to make new ones like the character?

Donna: Ryan has remained closely connected to Star Trek fans who welcomed her into the franchise all those years ago. I can imagine she had some reservations about revisiting this character, not because she didn’t think she could do it, but perhaps because of the desire to do the character justice. She’s done that and more, this is not the same Seven of Nine we knew. This one is older, wiser, battle-worn and weary, but you can still see her optimism and faith in humanity. She’s brought several of the Seven’s mannerisms and voice patterns but added layers of depth to it, creating an intriguing new look at the character. She’s also in a fashion, masterfully provided us with, if you will, Star Trek’s first kick-a** action character!

Bex: This is a different Seven of Nine now, one who has been allowed to evolve. I can’t imagine it was easy for Ryan to step back into the role of someone who should have been familiar, but is now so different, so changed by time. However, she did it with ease. Watching this character now, the younger Seven is still recognizable, yet her speech, how she holds herself, has all changed. Ryan has brought Seven back with renewed energy, and, with tiny hints of the younger Seven still there, the fun in watching her now is that she has been allowed to grow and hasn’t just come back like no time has gone by. Too many times recently I have watched old, familiar characters in revivals (not Trek), and been disappointed by their return due to the actor’s stilted portrayal, trying to force a character they’ve been away from too long, and a character the writers have kept unchanged. But Ryan, and the writers, gave us the Seven of Nine we needed her to be now. Less perfect than she was, damaged now with the emotions to match, but still strong, still a leader, and more human than we’ve ever seen her. For new fans, who may not have a complete understanding yet of all Seven has been through in her life, there’ll be mystery about the character to pique their interest, and from there a whole history to explore.

Zandarl: When I saw the sneak peek of her in the Picard trailer it was clear this was a more confident Seven than we had seen previously. From her entrance at the end of Absolute Candor and saving their hides to the flashback of losing ‘her son’ in such a brutal way. We see a side of Seven that’s only been touched on before. It’s no surprise she has pleased fans both old and new. 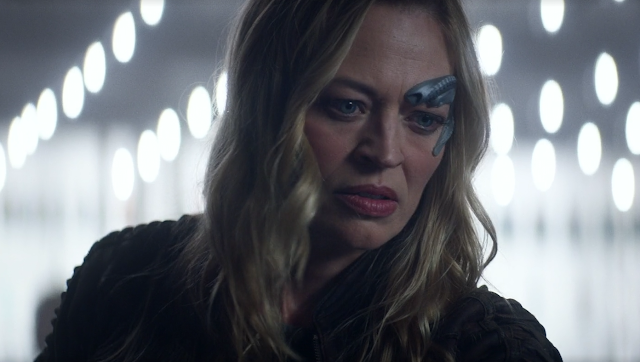 Which were Ryan’s better moments, the action sequences as the hardened vengeful ranger, or the more introspective ones interacting with other characters?

Donna: That’s so hard to choose. She brought so much to both aspects of the character. Her quiet, introspective moments with Picard highlighted Seven’s humanity. Her gut-wrenching grief at the mercy killing of Icheb had me in tears. I loved her sharp, biting exchanges with Bjayzl (Necar Zadegan). They were intense and compelling and of course I cheered when she cut loose on the club like an avenging angel! Ryan brought us a gamut of emotions, with seemingly little effort.

Bex: Both.Ryan brings a vulnerability to Seven while speaking with Picard about humanity, but it’s tinged with hints of regret for what she’s about to do. In the action sequences, it’s almost hidden as she’s firing her guns but there’s sadness in her, from what she just did, and why she did it. What fueled her revenge has haunted her, and this loss of someone who was like family, a son, will continue to haunt her, and we see this in Seven’s eyes. Ryan nailed every scene. She let emotions be seen outwardly in subtle ways, while inside the character was being consumed by them.

Zandarl: That’s a tough question as I adored both but it was a change of pace to see a softer side to the character and the conversation with Picard at the end was one of my favorite moments of the episode. 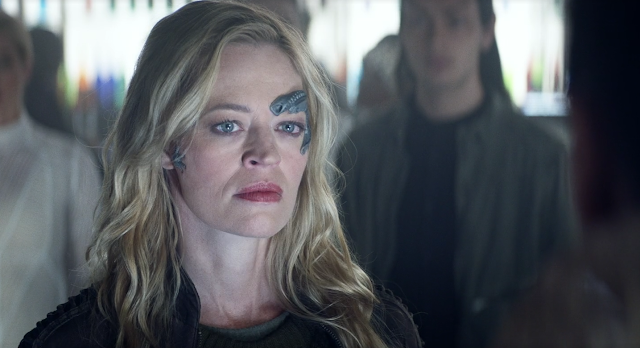 Ryan was convinced to reprise this role because of the creative way they chose to evolve her character. Do you think that with the new focus CBS All Access has on the Star Trek franchise that they could potentially do a Seven of Nine spinoff? What do you think that series would look like?

Donna: I would truly love a Seven of Nine series, seeing her further explore the galaxy, kicking butt and taking names, while still struggling to manage her humanity. Give her a sidekick like El Nor, someone to nurture and guide along the way. She won’t always be perfect and circumspect in her methods but she will always fight for what is right. We always knew Ryan was an amazing actress, however, this episode showed us she makes an awesome action star as well. A heroine seeking more humanity is a show I’d watched every day!

Bex: A dark, gritty series of Seven of Nine trying to grow, while backsliding, seeking revenge, dealing with trauma AND emotions, maybe even falling in love, while struggling with her Borg identity? Give it to me now.

Zandarl: It’s no surprise we knew she would be back for more than one episode her performance shone and I can see talks of a spinoff as there seems so much we don’t know about what has happened to her since Star Trek: Voyager. 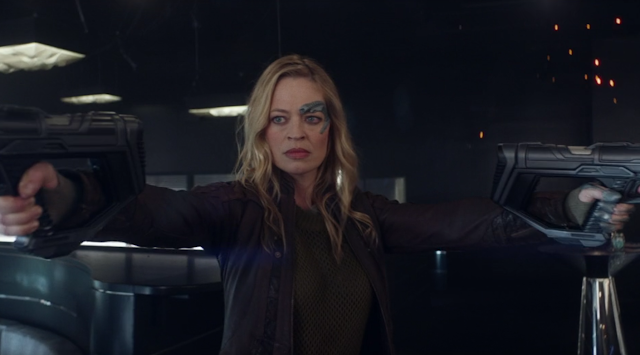 What are your final thoughts on her winning this recognition?

Donna: From the first heart-breaking scenes of this episode there was no doubt in my mind that Ryan take this honor this month. Then she proceeded to have us crying and cheering as she took us on this wonderful exploration of the new Seven of Nine. Her appearance on the show and return to the franchise was one of the strengths and highlights of Star Trek: Picard. A much, much deserved honor. I cannot wait to see where Seven of Nine, excuse me, Annika’s journey takes her next.

Bex: Much deserved. I’ve been enjoying Picard, but Ryan’s portrayal of Seven, this new energy she brought to the character, pushed the storytelling along and gave us one of the show’s strongest episodes and renewed my excitement in what was to come.

Zandarl: There is no denying the cast on Picard is full of outstanding performances. However, as a fan of Seven since Star Trek: Voyager and Ryan’s other works I am happy, she got the recognition for her performance in this episode. Seven is such a complex character human, machine, then human again. Raised by one of the most hated beings in the universe yet through them she found family. Her understanding of them helped her free Icheb who sadly we see die in this episode. We all felt her heartbreak in that scene as she was forced to put him out of his suffering. A worthy win for Ryan and a stunning performance. 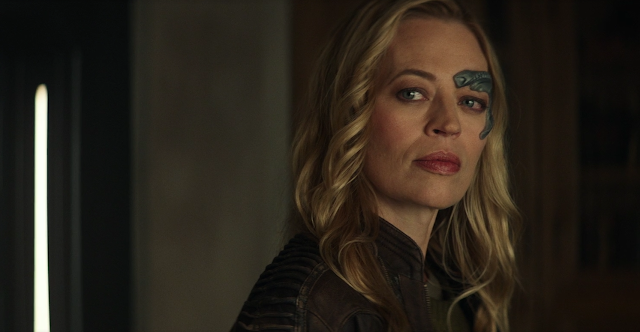 Jeri Ryan’s return to the franchise with her appearance in the series is a major part of the first season success of Star Trek: Picard. She brought new life to a fan-favorite character, showing us many new sides and complexities to the life of Seven of Nine. She infused the show with an exciting energy in Stardust City Rag that has fans clamoring for her to receive a show of her own in the Star Trek franchise. The producers would be well advised to lock her into a commitment for such show right away, she deserves it.

Please use the comments to discuss all your favorite parts of Jeri Ryan’s performance in Stardust City Rag.