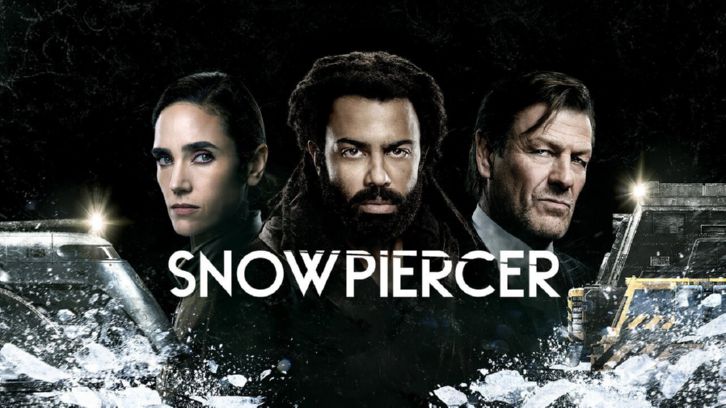 The train is coming around the bend...

The Doctor aboard Snowpiercer starts off this episode by explaining to us how the Black Market works on the perpetually traveling train. Everything moves hand to hand. You have to use what you've got, your personal stuff. Things of value to you and others are what makes the wheels turn. Goods moving back and forward, with everyone trying to move up in the train as much as they can. The only way to do that is with access. Hence why access is power. 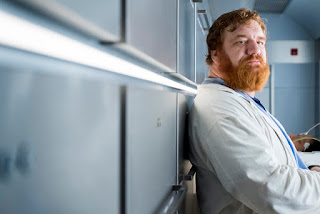 Train Detective Andre Layton dreams of days gone by. In his slumber he relives the time when his fiancée left him. She can't take the Tail section anymore and decides she'd rather take her chances in the unknown Night Car than spend any more time in the rear. Layton stops her and gives her his long held onto wedding ring in case she needs it to trade. She takes it and makes the walk of shame past all the other Tailies as she goes. They harass her as Layton cries and is consoled by train mom Josie. Andre is jolted from his sleep by two guards waking him and putting a bag over his head. They force him out of the cell and into the hallway.

Boss of bosses Melanie is conducting a staff meeting where she reads a note from the man himself, Mr. Wilford. He states it's been a tough 48 hours but he values all of their hard work and commends them in their spirit and resolve. Commander Grey notices Melanie's use of a Winston Churchill quote in her note she wrote as Mr. Wilford and calls her out on it. Melanie deflects the uprising, dead cows, rationing, etc concerns...by getting ruthless Ruth to move up the boxing event they had planned for the future. Winner gets a chance at a 2nd class room. They agree the bout would make a nice distraction. 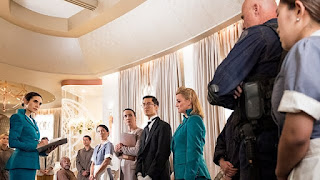 Layton is hauled in front of Roche and Melanie with his bag still on his head. They tell him it was Mr. Wilford's idea. Ha! Yeah, the irony is thick. Melanie can say or do anything on the train as long as Mr. Wilford, or she, says it's OK. Convenient. Melanie tells Layton his lane is very narrow as a Tailie and that he should stay in it. They discuss murder victim Sean and how he was keeping tabs on the Black Market. He was looking for a source of the underground drug Kronole. Layton knows of it since it has been in the tail for a least two revolutions, which surprises the other two. Layton is shocked as authoritarian states usually control their own drug trade. The three decide to lean on the Brakemen as Andre reveals to them that Oz has been trading Kronole for bj's in the rear of the train.

Breakwoman Bess Till hooks up with chef diver Jinju in her 2nd class room. They fool around and discuss her punishment for letting Layton escape last episode. During some pillow talk Jinju reveals Nikki is out of the Drawers but is still not fully OK. Till and Layton want to interview her but Melanie is not letting it happen. Seems theres lots of secrets and hook ups happening on the train, understandable since it is now a microcosm of what was the real world.

Layton and Roche head to talk to OZ and the detective says that since they've done such a terrible job so far, he'll take the lead. They corner him in the mess hall and confront him about his dealings. He admits to passing a little Kronole to the woman in the Tail who lost her arm. Humanitarian aid and all that. Afterwards Oz is marched into the Chains and into Terrance the crime bosses bunk. Terrance wants to know why the detective wanted to talk to him. Oz tells that they are looking into Sean's murder and that he told them nothing.

Roche demands he get to talk to Layton's ex Zarah. She tells them she knows nothing about the murder of the father of her unborn child. They learn that the victim Sean often bragged about his ability to get things, but never told her specifics. Things that came from up train.

Ruth walks through first class as the Casino has opened and people are ready to party. Old school money family the Folger's stop Ruth and tell her they know what is going on. Former lawyer, momma Folger sees through Hospitalities attempt at distraction from whatever extinction level event has recently occurred. Ruth acquiesces but pleads for their solidarity for the sake of all aboard the train.

Breakman Roche breaks out his lunch in front of Layton. Andre talks to him as he eats and deducts he's married. Roche tells him he is and had three kids. Two didn't make it. Damn. They discuss the case as Roche shares a slice of apple with Andre. Roche thinks its not that complicated, a psycho perv committed the murder.

Melanie descends down into the train to discuss the status of her train with Bennett the engineer. They solved the crack but theres major problems and they are pumping way too much heat into areas and it can't last. Jinju calls Melanie and gives her a heads up that Till found out that Nikki is awake and is on her way to speak with her.

Layton and Till find Nikki and the Doctor lets them in to talk to her. They look her over and figure out quickly that she looks like she's been given Kronole. Melanie comes storming in and kicks them out. Layton suggests Kronole is just the street version of their sleeping drug. Melanie confronts the Doctor demanding to know what he's done. What he's done is trade the sleep drug for supplies. Different couriers would come through and he would trade for items he needed, like vegetable balms for the sleepers and more. As the two talk Layton finds a bag of Miles' hair and freaks out. He thinks the Doc did something bad to the boy and goes after him. Melanie intervenes and tells Andre the kid made the apprenticeship program. They go to see the boy in school and watch as he answers a question. Later Layton and Miles talk and he reveals he has his own bunk and ate something called a tangerine! Lucky kid.

A group of Tailies look out a small window in the rear of the train and realize they are behind schedule. They are slightly slowing down which is not good as they should be banking as much speed as possible since the Sierra Madres are coming up. They fear if they slow down too much, they may be de-coupled from the train. Which would suck.

Melanie, Till, and Layton walk and talk. Andre wants to go see Josie in the Tail and let her know Miles is OK. Melanie says no as Fight Night is about to start. Layton wants to go to the event and look for the dope slinging janitor he heard about. Melanie says yes and tells Till to watch his back. 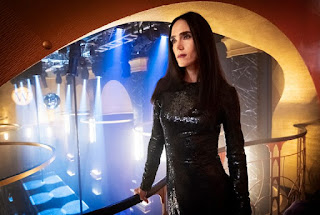 Layton and Till go to the fights. The car is packed and people are going crazy wild. They see all the janitors in one place and notice the 1st class passengers are all up high in their balconies. Melanie comes over the PA and announces that Mr. Wilford has a message for them all. Well yes she does as she crafted just a bit ago. The elder man recording she made earlier plays and Mr. Wilford talks to the train. Everyone listens and then the fight begins. A one-armed janitor battles an opponent Andre finds Zarah and meets up with her behind the bar. She'll set up the meeting with Terrance but in case of need, she gives him his ring back to barter with. He tells her he still loves her but...he has to help the Tail. She knows and they kiss.

Nikki wakes up and makes her way out of her room and into the hallway. She stumbles along in a daze.

Zarah sets up meeting with the head janitor Terrance but instead Brakeman Oz shows up. Oz tells him that Terrance doesn't want to be seen with the Train Detective. Layton tells him he'll lose Till to talk to Terrance and that seems to do the trick. Suddenly Nikki walks into the Fight Night arena. Really? How'd she get past the armed guards at the door? Daughter Folger, L.J., notices Nikki walking around and looks meaningfully at her bodyguard. Hmmmmm...... Andre gets led to Terrance as the fight gets out of hand and spills into the crowd! Now everyone is brawling and the 1st class passengers are loving it, especially little L.J.

Layton is led through the Chains and meets Terrance. He takes a date from the man and they sit and chat as they eat. Layton asks if he ever sold Kronole to Sean. Terrence is surprised to hear that the murdered man was an informant for Mr. Wilford. Andre suggests things could be better for Terrance if he solved the case and gave Mr. Wilford a bad guy. Terrance has a poignant tale of how he used to be a janitor in a high-rise and now he is a janitor on the train, only the train is like a high-rise on its side. The two men realize they both want to see the penthouse. Terrance says he saw Sean the night he died. He sold him and another person some Kronole and gives Layton a description. Andre thanks him and asks for something else, something smaller. He uses his ring to trade for whatever it is.

Roche is clearing the Fight Night room and telling everyone to head home. Melanie gets Ruth to clear out the 1st class passengers as she gets the Folgers to stop waltzing and head home. L.J. ignores them all and watches Layton cross the room from on high. Andre tells Melanie and Roche he has a description of the murderer and he'll tell them if he can go see Josie in the Tail. They head down there and Andre sees Josie. He tells her about Miles and that he misses her. He gets closer and kisses her through the small opening in the Tail door. The guards pull them apart and it's Melanie herself that slams the opening closed. She wants to know who they are looking for. 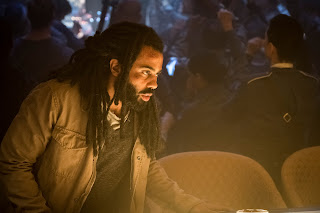 Nikki sits in her hospital bed, still a bit zoned out from the Drawers and the boxing excitement. Outside the room a man approaches the posted guard and kills him! Inside the room the same shadowed man kills the nurse stationed there. He pulls up a chair to talk to Nikki and we learn that the killer is the Folger's bodyguard! He sits down and tells Nikki she doesn't remember him, but that she knows who he is.

In the Tail, Josie makes her way back to her bunk. She sits and removes a small vial from her mouth. Layton must have passed it to her when they kissed. Rattling around inside is a tiny chip used to open the train doors. Bingo.

More excitement, more mystery, some answers, and a train Fight Club made this a pretty sweet episode. Problems are stacking up and people are getting jumpy. Jennifer Connelly is still killing it as both Melanie and Mr. Wilford and I like the way they have her floating around the train as an employee, while still running everything as the Boss of Bosses. Train kept a rollin', all night long.