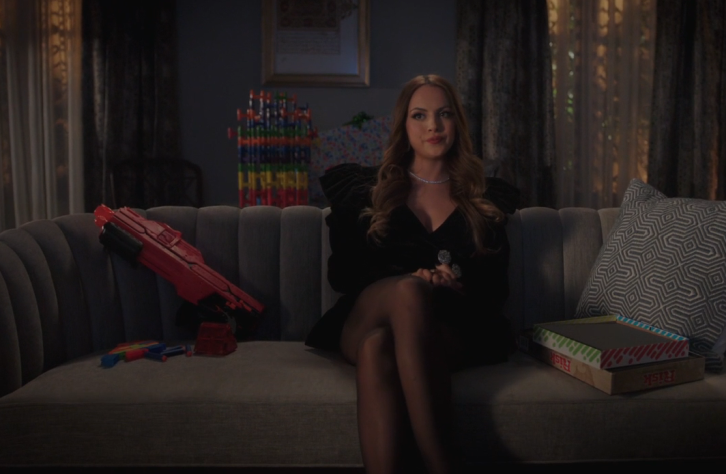 Fallon’s fairytale engagement comes crashing back to reality (in classic soapy fashion) in “That Wicked Stepmother,” and she’s not the only Carrington who didn’t get the happy ending they wanted this week on “Dynasty.”

Starting with that A-plot, as she and Sam are steaming ahead with engagement party plans, Fallon begins to fret that Liam has been acting weird since they’ve been back in Atlanta. She decides to put a dollop of spice on the problem and so, of course, it’s when Fallon is waiting to spring some sexy lingerie on him that Liam springs baby mama Heidi (Emily Rudd, “The Romanoffs”) and their son Connor (John Jackson Hunter, “Mr. Mercedes”) on her. Fallon immediately smells golddigger (“Why else would she show up with a Van Kirk heir as soon as you get engaged to a Carrington?”), but Heidi seems nice and normal, and Liam is ready to roll with the situation and spend some time with his son.

Thanks to some barbed advice from Alexis, Fallon starts to spin out about her place in this new family picture and goes about securing it in classic Fallon fashion, first by surprising the boys with hotel carts stuffed with board games in an effort to win Connor over, then by scheming to set Heidi up with an out-of-state dream job when she learns Heidi’s thinking of relocating to Atlanta. After this leads to a blowup with Liam at the engagement party, Sam is the one who gets Fallon to see sense, from his perspective as someone who grew up without a dad. And refreshingly, when Fallon goes to talk to Liam, he admits that he’s been freaking out the whole time, that he never wanted kids and doesn’t know if he has what it takes. Reaffirming their partnership, they agree to help each other be the best part-time parents they can be.

But uh oh! While I speculated she would depart in a more body bag-y manner (more on that in a bit), the episode does end with Heidi gone, having fled Atlanta and abandoned her son, meaning Liam and Fallon have been promoted parentally against their will. Part of me wishes there had been something soapier to this – I actually wondered if maybe the absent Laura Van Kirk had sicced Heidi on them – but I guess we’ll see how Connor’s presence complicates things in the weeks to come. 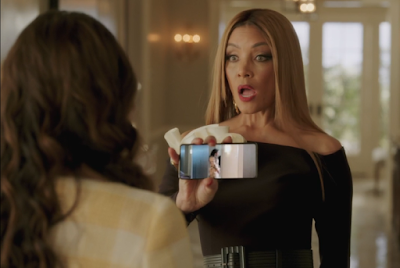 Speaking of complicating things for the people around them, Dominique! This week, she’s still plotting to get her reality show project off the ground. To that end, she and her rad pantsuit blackmail Cristal with her “affair” so she’ll extend an invitation to Vanessa to move into the manor. Then, she sideways twists Culhane’s arm into asking Fallon to sign Vanessa to her music label. But that’s still not enough to get the producer she’s pitching onboard. So, she blows up a bomb on herself in spectacular fashion, leaking the sex tape of her and Culhane to the media while Vanessa’s performing at the engagement party.

Michael Michele’s performance in the scene that follows is amazing. It’s clear that Dominique did not relish pulling this ripcord, hurting Vanessa like this, but she’s also unapologetic about doing what she’s convinced she had to do to achieve her ultimate goals. And it worked, as Dominique gets the show picked up and convinces Vanessa to go along with it to further her career. It really crystalized for me that Dominique is, week-in and week-out, my favorite character on this show. Elaine Hendrix is fine as Alexis, but she hasn’t been the scheming soap bitch I thought she’d be. But Dominique – and Michele – brings this chaotic sudsy energy to every episode, and I appreciate that.

Having less success with their schemes this week was Blake. The olive branch he extends to Adam (and sidebar – there is no mention of whether Adam went through with selling the vineyard land out from under Blake, as he planned to do last week) turns out to be a blackmail stick, as Blake drops the bomb about Jeff’s illness and evilly muses that it would be very bad for Adam if Blake was forced to use that information to stop the Carrington Atlantic sale. More concerned that Alexis and Jeff kept this from him and thus don’t really trust him, Adam agrees to steal the blackmail material they have on the CA CEO. Blake is impressed when, instead of just handing over the damning recording, Adam leverages it for Blake’s seat on the hospital board. But uh oh! It was all a double-cross, and Blake is left with even less ammo and allies than before. 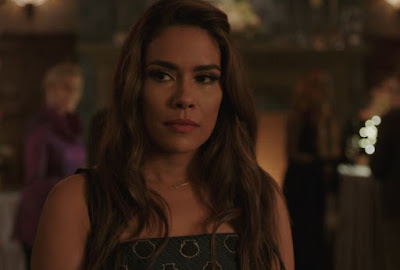 Finally, there’s Cristal, whose plotting literally blows up in her face. When she mentions to the hitman she hired to kill Alexis that Dominique spotted them together, he gets spooked and immediately cancels the contract. In desperation, Cristal calls in her brother Beto to help (and sidebar – I still think Beto would be a great, soapy romantic option for Sam). Beto initially balks at his sister’s plan to blow up Alexis’ car at the engagement party, but his efforts to get through to her fall on deaf ears; in fact, Cristal seems even more resolved after a cold conversation with Fallon. But it all goes pear-shaped when Beto finds himself forced to choose between two cars. As I said earlier, I was convinced he would plant it on the wrong vehicle and that it would be Heidi’s. But when the bomb goes off, Beto is the only one to get hurt, to Cristal’s horror. At the hospital, Beto assures her that he covered their tracks, but I’m assuming this mistake will come back to haunt Cristal sooner than later.

What did you think of “That Wicked Stepmother?” Do you love what Dominique brings to “Dynasty” as much as I do? Come share your thoughts in the comments section.