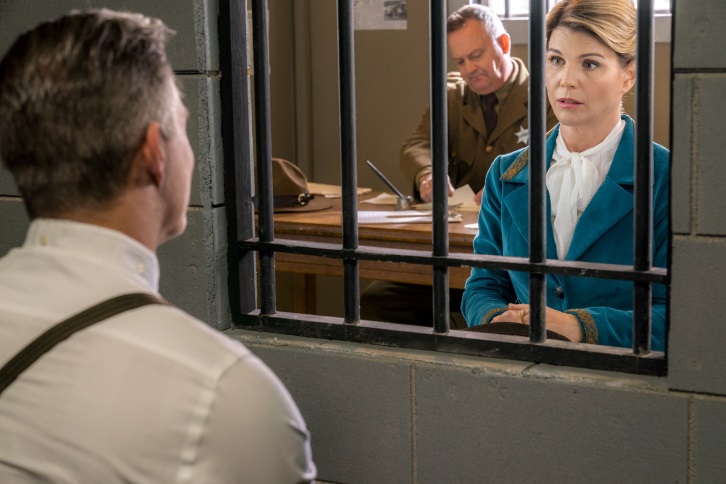 ABIGAIL PLEADS FOR LENIENCY FOR HENRY WHILE BILL TESTIFIES AGAINST HIM

STUDIO CITY, CA – February 12, 2018 – In “When Calls the Heart’s” season five premiere, “Believing,” premiering Sunday, February 18 (9 p.m. ET/PT), Abigail (Lori Loughlin) leaves town to testify on behalf of Henry (Martin Cummins) while Bill (Jack Wagner) joins her, but will testify against him. Abigail must convince a strict judge to give Henry a second chance but it seems like the odds are against it. With Bill gone, Lee (Kavan Smith) is made acting sheriff and – despite Rosemary’s (Pascale Hutton) encouragement – isn’t confident that he is up to the task. Still anxiously awaiting Jack’s return from the Northern Territories, Elizabeth (Erin Krakow) is given a diversion thanks to a surprise visit from her sister, Julie (Charlotte Hegele), who reveals to Elizabeth the surprising career path she’s decided to take. Clara (Eva Bourne) thinks it may be time for a break from Jesse (Aren Buchholz) but becomes jealous when she sees Jesse spending time with Julie. Dr. Carson (Paul Greene) is determined to stop a traveling salesman selling a tonic that has caused a stomachache epidemic in town, which leads to a surprising arrest.

Premiere Date Revealed
SUNDAY NIGHT IS FAMILY NIGHT ON HALLMARK CHANNEL. THE SEASON FIVE DEBUT OF "WHEN CALLS THE HEART" IS JOINED BY THE PREMIERE OF NEW SERIES "MEET THE PEETES" SUNDAY, FEBRUARY 18

Sunday nights on Hallmark CHANNEL is family night when season five of beloved series WHEN CALLS THE HEART returns Sunday, February 18, at 9 p.m. ET/PT, immediately followed by the premiere of new docuseries MEET THE PEETES at 10 p.m. ET/PT. The addition of "Meet the Peetes," which follows the lives of Holly Robinson Peete, Rodney Peete and their multigenerational family along with the upcoming January launch of the sitcom "Full House," further solidifies the network's position as the family-friendly destination on television. Candace Cameron Bure, Lori Loughlin and Jodie Sweetin, stars from Crown Media Family Networks hit movies and series, started their careers on "Full House" and now fans can watch every episode from the beginning on Hallmark Channel. With the series' timeless themes of the importance of friends and family and the valuable life lessons that are often part of the storylines, Hallmark CHANNEL is the ideal home for "Full House."

In season five of "When Calls the Heart," the network's longest running primetime series, Elizabeth (Erin Krakow) anxiously awaits news of Jack (Daniel Lissing), who has returned to the Northern Territories, while she focuses on teaching her students and dreams of the day when Jack comes home safely and they can plan their wedding. Meanwhile, she gets an UNEXPECTED visit from her sister Julie (Charlotte Hegele), who reveals to Elizabeth the surprising career path she's decided to take. Abigail (Lori Loughlin) is faced with a new crisis as mayor of Hope Valley when looming financial troubles for the town also impact Lee's (Kavan Smith) operations at the mill. Ever the dedicated wife to Lee, Rosemary (Pascale Hutton) keeps busy at Dottie's (Erica Carroll) dress shop as she works to make Hope Valley more fashionable. Sheriff Bill Avery (Jack Wagner) keeps Hope Valley safe, as well as maintaining a close eye on Gowen (Martin Cummins), as the former mayor continues to adjust to his new life as a laborer at Lee's mill. Gowen keeps tabs on the town's business and offers unsolicited advice to Abigail, who's not sure if his intentions are honorable. Doctor Carson Shephard's (Paul Greene) skills are put to the test when an unknown sickness sweeps through town, he opens his heart to love again and takes a risk that could save or take the life of someone he cares for.

In "Meet the Peetes," audiences will see Holly and Rodney's hectic lives as they attempt to balance raising four kids, including one with autism, running their HollyRod charity and spending time with Holly's 81-year-old mother Dolores, who has been living with the Peete family since her retirement from her career as a talent manager. Their daughter Ryan is in college at New York University while RJ, their son with autism, is working for the Los Angeles Dodgers and decides he's ready to leave THE FAMILY nest. On top of that, Holly's mother Dolores announces she's ready to move out too - the Peetes are in a period of change that will continue to unfold in "Meet the Peetes," only on Hallmark Channel.