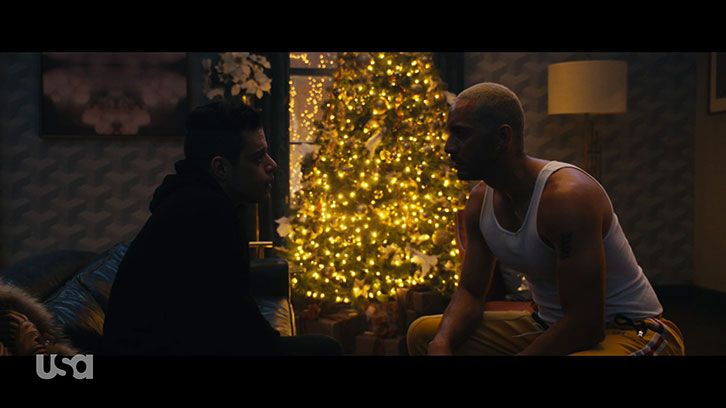 The promotions team weren't wrong when they claimed this week's episode of Mr. Robot would change everything. I don't think anyone was expecting anything like what this hour ended up morphing into, but the hour's catchphrase, 'Bruh', sums everything up in a weird sort of way. "407 Proxy Authentication Required" was written and directed by Sam Esmail.

On the back of a highly focused episode last week, this one was even more narrow, with just Elliot, Fernando Vera and his two henchmen, Krista, and Mr. Robot featuring. Like the last two episodes, it took place on Christmas day, but could almost be seen as occurring in real time, so theoretically there's still time for the Deus Group to have their highly anticipated meeting.

Splitting the hour into five acts is not unusual, but telegraphing them to the viewer was an interesting decision, and one I don't really understand the reasoning behind. Things would have been just fine had that not taken place - splitting the acts up so clearly. The first three did struggle a bit in my view. When the second act picked up where the first let off I knew this was the format that the entire hour would run with, and no other storylines would be featured. So now it was up to Sam Esmail to draw enough interest from the Vera/Elliot/Mr. Robot/Krista confrontation to sustain a full episode.


Lets get one thing straight, fuckface. I ain't no puff of smoke.

The first three acts all had Elliot resisting Vera's requests as a common trait. Elliot thought he was in a position of power, however Vera slowly but surely broke that down, eventually getting Elliot to admit that Krista was far more important to him than he was letting on, while also drawing Mr. Robot out from the shadows. Once Elliot was at that point, Vera was totally in charge, and he too became sucked into Elliot's crazy mind, despite the offer of virtually unlimited funds from the Cyprus National Bank hack. 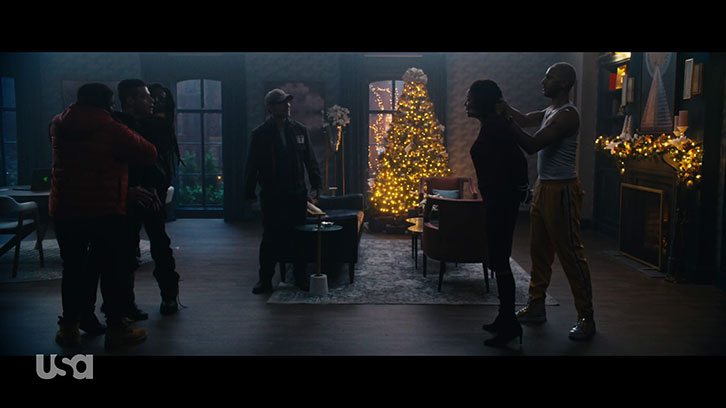 Act Four was clearly the hour's climax. A forced therapy session between Elliot and Krista ensued, with Vera watching on and prompting the session based on Krista's file. The day Elliot leaped from the window was of critical importance here, with another version of events presented through Krista's files. With further questioning, Elliot's mind was finally able to reveal that his father sexually molested him, and it was the impending threat of another episode of that happening that led to him jumping from the window to escape his father, while also hiding Darlene in the wardrobe.

The writing was on the wall early in that act that something involving sexual abuse was going to crop up, just like Act 5 signaled that Vera had also gone through something similar as he began to level and empathize with Elliot almost immediately after Elliot admitted what had happened. Through all of this, Mr. Robot is revealed to have always been present and in some control of Elliot's mind and actions, ensuring the memories of the abuse haven't been allowed to surface, and also that Elliot thinks of his father as a good person.

Viewers have routinely questioned how Mr. Robot works, and why he is present, but in my opinion this backstory wasn't the one to pick, and the question of how Mr. Robot works still hasn't really been answered. We now know to a degree why he's there in Elliot's mind, but not really how he got there. I'm not sure we'll ever get an answer to that, though I'm more hopeful that an answer may be forthcoming concerning how Mr. Robot is able to be present to others, but then not all of a sudden. I would have preferred a differing reason from sexual molestation for his inception, as that would have made things feel less confronting and generally yucky. 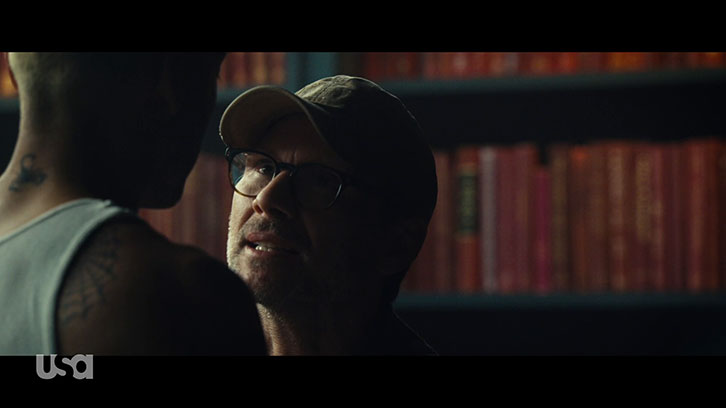 The final seconds of the hour provided a decent twist - one which I was actually really pleased to see. A couple of weeks ago we learned in that freezing cold trek through the forest that Elliot has no friends, but in this episode, through their shared childhood trauma, Vera became Elliot's friend, but only for a moment in time because he was stabbed and presumably killed by Krista


You are the storm. And it's the rest of the world that needs to run for cover.

The above quote from Vera before he was killed is hopefully what Elliot will seek comfort in now. Though Vera opted to seek the power he felt he was denied by setting up a New York-wide drug empire, Elliot will surely press on with the Cyprus National Bank hack, though now he's armed with the actual memories of what happened to him as a child, and it's him that's in charge, not Mr. Robot.

The episode marks the midpoint in this final 13 episode season, but brings to a close what's surely one of the most bizarre character reprisals in television history. Vera was gone for all money early in the first season, but his return in the Season 3 finale post-credits scene, right through to capturing Krista, then Elliot, and culminating in what we saw last night which went some way to answering the question of who Mr. Robot is and why he exists. I don't think anyone saw that coming. It's not been my favorite storyline this series has featured, but it's been as entertaining as it has been utterly bizarre.

Technically, this hour was a masterpiece to watch. Esmail deviated from his usual 1.78:1 aspect ratio to something a bit wider than the cinema standard 2.35:1. For the tight shots featuring dialog this allowed for some more conventional shot selections not often seen in this series. The set was very simple and unobtrusive, allowing the characters to stand out more. The cast were just outstanding. We know Rami Malek can turn on an award-winning performance almost effortlessly, but Gloria Reuben and Elliot Villar gave performances I didn't expect them to be capable of delivering, and Christian Slater's reduced screen time in comparison still delivered plenty of punch. There is serious talent in front of and behind the camera in this series, and the content they produce is a joy to watch.

All up, I think there's going to be a lot of mixed reaction out there concerning this episode of Mr. Robot. While the talent can't be disputed, I think there's plenty of viewers who might not have enjoyed as much of this episode as they hoped - I know I'm one of them. I'm just not as satisfied as I expected I would be. Breaking the hour down to its bare bones one would say that all we found out was Elliot was sexually molested as a child, and somehow the Mr. Robot persona was in his mind masking those memories. How that's built on in the final six episodes will hopefully provide some more concrete answers to the questions that arise from that breakdown.

As always I'd love to hear your thought and theories on this episode so drop them in the comments below, and I'll see you right back here next week, bruh.