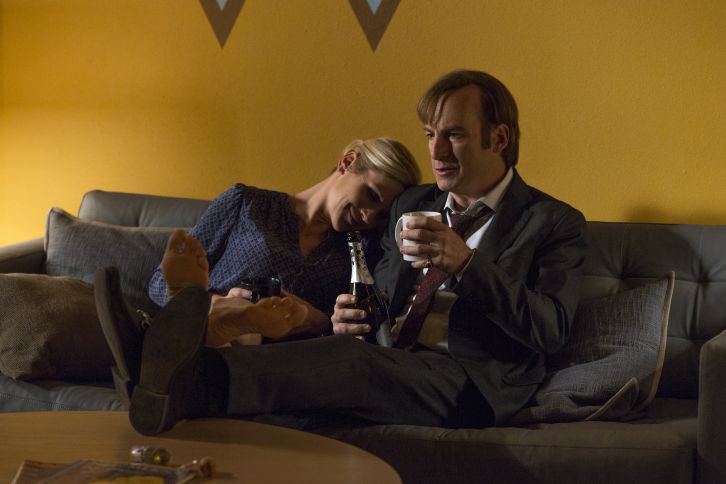 
We’ve only seen Chuck’s relationship with Rebecca in snippets. Do you think her presence in that room changed the way that Chuck’s testimony on the stand went?

Yeah, I suppose. Like I say, it was already some months ago and that scene was … there’s so much going on there. But when it becomes clear that she’s there, that that’s really her sitting out there — the curiosity of what she’s doing there does throw Chuck a little bit. When you see your ex, you can’t process absolutely everything all at once. I couldn’t tell you to any degree of certainty what difference it made, but I’m still just a guy on the stand answering the questions to the best of my ability. Yeah.

Source:
Read More on EW
It has felt a lot of the time like Chuck hasn't been giving Jimmy enough credit for his intellect and what he's been trying to do. How important was it for you that in this key episode, Chuck really is giving Jimmy a pretty fair amount of respect as a lawyer and what betrays Chuck is his own blindspot towards himself and not Jimmy?

Yeah. And the other point that I think needs to be made is that the beginning of this episode is all about Jimmy going out of his way to be kind and to help Chuck. It's a deception that he's helping Chuck with, but he's really trying to be helpful to his brother. It's Jimmy's attempt to be a loving person, really, and to be a good brother. That impulse is not exactly absent in Chuck, but it's not active. And it's not active, I think, because he's so self-motivated. I don't want to get too nuts-and-bolts about this, because that's genuinely the center of the problem here.

Now Jimmy's got his problems. We know kind of how Jimmy's going to end up on the wrong side of the law. But beyond that, what do these two brothers mean to each other? It's complicated like any pair of siblings is complicated and even more so if one brother is helping the other brother be deceptive. We like to think that we've designed a pair of brothers that is believable and frustrating and potentially OK. I'm not gonna tell you how OK it is, because that's for you to find out and it's for us to find out, too. My character's a man who's very, very much self-motivated and that's who he is. I think he would like to love his brother. He just doesn't really know how to do that, because of how he feels about himself.

Jimmy has a new endeavor; Chuck pushes himself to the limit; Nacho finds himself in a power struggle.