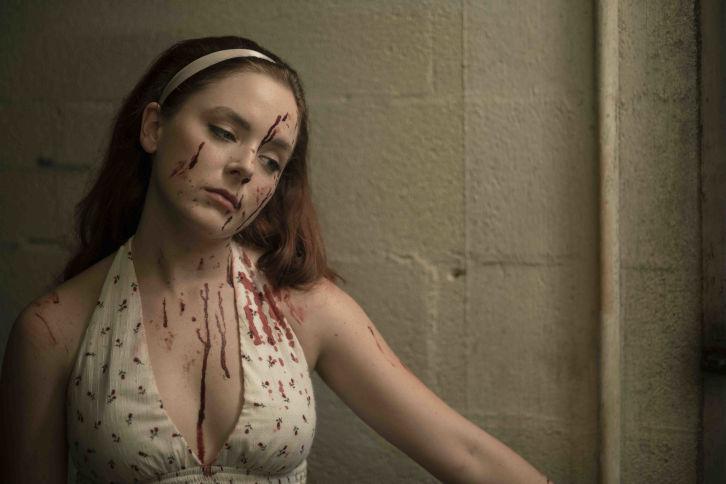 Big Graham is back. The 3 River Phoenixes have to cover for one of their own, and Ethan finally chooses a side. Earl is called away to deal with a crisis at home. The Harlow siblings are reunited, and Doris surprises Queenie.

Ethan is caught between two worlds and Meredith has to decide if she’ll protect him. Matty comes under suspicion, but Avron pushes too far. While the Brawlers zero in on the Monster Ring, Doris and Bash celebrate their anniversary.

Doris and the Monster Ring are forced to shift gears. The Bang-A-Rang reels from an attack, as Avron discovers evidence of a traitor. Haunted by the past, Joel opens up to Matty. Meredith and Ethan go on a date, but are interrupted.

A shaken Meredith reconnects with her father. Doris and the Monster Ring attend a Bang-a-Rang. Queenie and the Pin-ups defend their family.

Ethan fears being found out, as Burt comes home and declares war. Having lost control, Joel does what’s best for his daughter. Doris and the Monster Ring prepare to take the fight to the Brawlers. Out on her own, Meredith is forced to save herself.

Doris puts her plans in motion by visiting an old friend, and Ethan is forced to deal with being caught between two worlds after his actions contribute to a sudden death. When Bash takes things into his own hands, Joel is unable to keep the peace anymore.

Doris learns how to work with her new crew The Monster Ring. Ethan discovers the real reasons he was pushed to join this world. Joel makes an unprecedented offering to keep peace with the Ghouls. Molly confronts her past with violent consequences.

Doris channels her past to recruit a crew with some unusual persuasion. Ethan gets a Brawlers history lesson. Joel works hard to preserve a fragile truce. Meredith acquires what she needs to one day get away.

Ethan learns about The Brawlers’ place when they face off against a rival gang. Doris navigates the obstacles of finding a crew. Joel tries to figure out why the Ghouls went to such lengths. Meredith’s secret enterprise has an unexpected result.

Years after being left for dead by her brother and his gang the Banished Brawlers, Katherine Harlow reemerges as Doris and begins to plot her revenge. Meanwhile, a kid named Ethan is in over his head when he joins the Brawlers’ world of the Bang-a-Rang.

BEVERLY HILLS, CA (July 26, 2019) — Today, during the Television Critics Association’s Summer Press Tour at The Beverly Hilton, Hulu’s Senior Vice President of Originals, Craig Erwich, presented the company’s lineup of upcoming original programming including Wu-Tang: An American Saga from Brian Grazer and The RZA, Dollface starring Kat Dennings, Looking for Alaska, based on the best-selling novel by John Green and produced by Josh Schwartz and Stephanie Savage, Reprisal from Warren Littlefield and starring Abigail Spencer and Mindy Kaling’s reimagining of Four Weddings and a Funeral, all of which join the company’s collection of premium original content.

“Hulu is taking big swings on bold and brand-defining stories that reflect the culture and inspire conversation. The series we’re presenting today come from many of the biggest storytellers and fresh new voices in entertainment, and reflect why Hulu is a home for creators to do their very best work,” said Erwich.

The news comes after the company received 20 Emmy® nominations across eight titles, solidifying Hulu as a home for premium content. In fact, Hulu has seen a 70% increase in engagement (total hours watched) with its original programming year-over-year.

Announcements revealed from the stage today include:

Hulu has joined forces with Emmy® Award-winning powerhouse comedian Amy Schumer for a first-look deal that will kick off with her new comedy series, Love, Beth.

Further details about the series will be announced at a later date. Love, Beth is expected to launch late 2020.

The Untitled Padma Lakshmi Series is a living cookbook made up more from people and culture than recipes. Curated by Emmy®-nominated host and author Padma Lakshmi (Top Chef), the series embraces culinary traditions from the first Americans to the latest arrivals alongside Padma’s perspectives and personal connection to each story. Filmed around the country, each episode starts with a single dish that represents and connects to a community’s history and traditions, and explores the evolution of that immigrant community through that cuisine. From family recipes and street food to high-end restaurants, each dish explored is a symbol of a unique journey and story that provides viewers a window into where communities came from and the tale of how they set roots in America. In the hands of different families and waves of immigration, an organic evolution emerges between traditional recipes and new approaches, different perspectives and emotions, all captured thru Padma’s eyes.

Each 30-minute episode follows Padma as she learns, immerses and celebrates communities from around the world that have taken root in America, changed it and been changed by it. The 10-episode series is produced by Part2 Pictures.

Two-time Academy Award® and Golden Globe® Award-winner Mahershala Ali has been cast as a special guest star in the Hulu Original comedy series Ramy. Ali, who is a huge fan of the series, will join creator Ramy Youssef in the second season, which is slated to premiere in 2020.

Ali was recently nominated for an Emmy® Award for his critically-acclaimed performance in HBO’sTrue Detective. Marvel announced last week at San Diego Comic-Con that Ali has signed on to play BLADE in an upcoming feature for them. His credits include MOONLIGHT and GREENBOOK for which he won Academy Awards® for his performances.

Ramy follows first-generation, Egyptian-American Ramy Hassan (Ramy Youssef) who is on a spiritual journey in his politically-divided New Jersey neighborhood. Ramy brings a new perspective to the screen as it explores the challenges of what it’s like to be caught between a religious community who believes life is a moral test, and a millennial generation that might not believe in an afterlife. In the second season, Ramy will delve further into his spiritual journey, finding a new Muslim community and embracing a deeper commitment to Islam.

New Original comedy series Dollface follows Jules (Kat Dennings), a young woman who – after being dumped by her longtime boyfriend – must deal with her own imagination in order to literally and metaphorically re-enter the world of women, and rekindle the female friendships she left behind. The 10-episode series will debut all episodes on Friday, November 15.

On December 6, Hulu will launch all 10 episodes of new Original drama series Reprisal. The series is a hyper-noir revenge tale following a relentless femme fatale who, after being left for dead, leads a vengeful campaign against a bombastic gang of gear heads.

The series is created by executive producer and showrunner Josh Corbin and executive produced by Warren Littlefield, Barry Jossen and Jonathan Van Tulleken, who directs 5 of the 10 episodes.

Marvel’s Runaways will return for season three on December 13 with all 10 episodes.

In an action-packed Season 3, the Runaways frantically search for their captured friends Chase, Gert and Karolina. The kids go head to head with an unstoppable enemy who has targeted Leslie — or more accurately, the child she’s carrying. Nico draws them all into a dark realm where its ruler Morgan le Fay, played by Elizabeth Hurley, is much more nefarious than anyone the kids have yet to face.

Marvel’s Runaways is executive produced by series showrunners/writers Josh Schwartz and Stephanie Savage (The O.C. and Gossip Girl) along with Marvel’s Head of Television, Jeph Loeb (Marvel’s Agents of S.H.I.E.L.D, Marvel’s Cloak & Dagger) and Quinton Peeples. Marvel’s Runaways is a co-production with ABC Signature Studios, part of Disney Television Studios. It is based on the Marvel comics created by the award winning-team of Brian K. Vaughan and Adrian Alphona.

Previously announced,Wu-Tang: An American Saga will debut on Wednesday, September 4 with three episodes, followed by a new episode every Wu-Wednesday.

Based on one of the most influential and important groups in hip-hop history, the 10-episodeWu-Tang: An American Saga is inspired by “The Wu-Tang Manual” and “Tao of Wu” and based on the true story of the Wu-Tang Clan. Set in the early ’90s New York at the height of the crack cocaine epidemic, the show tracks the Clan’s formation, a vision of Bobby Diggs aka The RZA, who strives to unite a dozen young, black men that are torn between music and crime but eventually rise to become the unlikeliest of American success stories.

The series is created and written by Alex Tse and The RZA and executive produced by Tse, The RZA, Method Man, Brian Grazer, Michael Rosenberg and Francie Calfo. Wu-Tang: An American Saga is produced by Imagine Television.

Also previously announced, Looking for Alaska, the limited series based on the best-selling John Green novel of the same name, will debut all eight episodes on Friday, October 18. The series centers around teenager Miles “Pudge” Halter (Charlie Plummer), as he enrolls in boarding school to try to gain a deeper perspective on life. He falls in love with Alaska Young (Kristine Froseth), and finds a group of loyal friends. But after an unexpected tragedy, Miles and his close friends attempt to make sense of what they’ve been through.

Hulu is the leading premium streaming service offering live and on-demand TV and movies, with and without commercials, both in and outside the home. Launched in 2008, Hulu is the only service that gives viewers instant access to current shows from every major U.S. broadcast network; libraries of hit TV series and films; and acclaimed Hulu Originals like Emmy® and Golden Globe Award-winning series The Handmaid’s Tale, Emmy® Award-nominated series including The Looming Tower, The Act, Catch-22, Castle Rock, and Pen15 alongside hit series Marvel’s Runaways, Ramy and Shrill and Oscar® and Emmy®-nominated documentary film Minding the Gap. The service also streams live news, entertainment and sports from 21st Century Fox, The Walt Disney Company, NBCUniversal, CBS Corporation, The CW, Turner Networks, A+E Networks and Discovery Networks – available all in one place. Upcoming Hulu Originals include Four Weddings and a Funeral from Mindy Kaling; Wu-Tang: An American Saga from Brian Grazer and The RZA; and Little Fires Everywhere from Reese Witherspoon and Kerry Washington.