In the immortal words of Robin Sparkles, "Let's go to the mall!" Or rather the Belchers are going to the mall, where they each have their fair share of adventure and heartbreak.

First there's Tina, acting more than a little creepy as she scopes out the local boys hanging out. One in particular grabs her attention: he plays soccer and has allergies. She makes her move. Say what you will about Tina Belcher, but she has the type of confidence that comes with not knowing any societal limitations. Her particular type of swagger is usually scared out of kids by the time they hit high school, but to see Tina approach a cute boy rather than just gawk at him from the shadows is pretty admirable.

But in this case she doesn't get to say but a couple of words to her floppy haired, soccer playing target before he tips right over onto her with his head ending up resting on her shoulder. It seems that the antihistamine he took for his allergies knocked him right out and into the arms of our heroine. 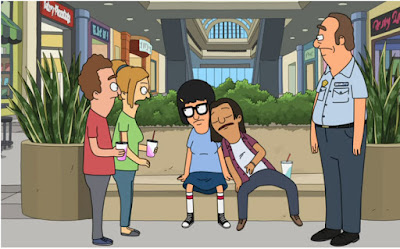 Tina is about to make a quick getaway but a security guard tells Tina to wake up her boyfriend because there's no sleeping in the mall. Right at that moment sleeping beauty's friends walk by. They take a look at the scene and deduce that Tina and Rip Van Winkle (who we later learn is named Brian) are boyfriend and girlfriend. Why else would they look so cute and comfortable with each other? Even the security guard's heart melts at their preteen romance.

Tina is about to set everyone straight when still more people just happen to walk by the scene: Tammy and Jocelyn. When those two mean girls assume, and are shocked by, Tina seemingly having a boyfriend, what's a girl to do but agree and pretend to be dating an unconscious stranger?

Tina is quick on her feet with her cover story (I especially liked how she pivoted after saying they met a barbecue place once she finds out that Brian is a vegetarian) but things go real sideways when Brian's friend checks his phone and finds a text message from another girl. And she's talking about kissing. And calling Brian her "Briander" after writing his name on her binder. Seems like the jig is up for Tina.

But Brian's friends throw another curve ball at the eldest Belcher sibling: they assume that Brian is two-timing Tina with the mystery girl. They get so angry on Tina's behalf that they wake Brian up to confront him about his indiscretions. And poor, antihistamine-addled Brian is totally confused by everything.

Brian's friends berate him about cheating on poor Tina, and Tina finally comes clean, but they don't believe her - they think she's covering for Brian. She must have really made an impression on them for the few minutes they've known each other. It takes the return of Tammy and Jocelyn, with their own questionable new boyfriends in tow, come to the rescue. Tina asks them, what's more likely, that she's had a secret boyfriend or she called a sleeping stranger her boyfriend? The truth is out and the jig is up. Tina went from hero to villain in record time. 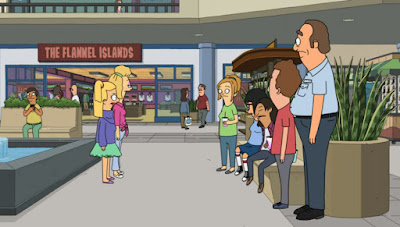 In other parts of the mall, Linda dumps Bob in the middle of their pants buying trip to go to a book reading by the author of the only book she's read. The new book a murder mystery set at a winery called The Deadliest Zin. As someone who is thinking of making her next book a murder mystery I'm deeply disappointed that the title is already taken.

During the reading Linda develops hiccups, interrupting the author throughout. Later, she spoils the ending of the book by correctly guessing who the murderer is after the first chapter, much to the author's annoyance. Upon hearing this the people waiting in line to buy the book change their minds, deciding not to buy it now that they know the ending. The author is at this point more than annoyed. Linda's just happy she got her book signed.

Left to his own devices, Bob goes pants shopping without Linda. He's out of his element, but luckily a familiar face is also in the same pants predicament: Sergeant Bosco is in the next dressing room over, trying on pants so tight that Bob can see the identification number of the gun he has hidden underneath. Finding the store not to their liking they go on a whirlwind shopping tour, even stopping at the store that serves champagne, and end up with matching ugly pants. To be fair, clothes always look better in the fitting room.

The youngest Belchers decide to spend their time at the mall at the Ani Malls, a shop that rents out rideable scooter-like contraptions which vaguely look like animals. They are told no racing, no jousting and no Tokyo drifting. They promise to follow the instructions. We know better.

After doing all those things Gene and Louise are ready to head back when Gene's catigator malfunctions and he can't stop, sending him on a wild, but low speed, ride through the mall. Louise jumps into action hero mode to save her brother, maneuvering herself under the out of control beast in order to cut its battery line. She's just in time to prevent a catastrophe at Grazielda's, a store with an abundance of very breakable knickknacks. Bruce Wills couldn't have done it better.

Makes no sense but it's funny: Gene referring to pop culture moments he really shouldn't know about. This episode it was a joke about Demi Moore and Indecent Proposal. Never change, Gene.

Blink and you'll miss it moment #1: When Louise tells Gene to give his Ani Mall more gas, she really should have been more specific.

Blink and you'll miss it moment #2: Tina hits on Brian's friend even as she's pretending to be Brian's girlfriend. Dang, Tina.


Anyone else think this has been the best episode of the season so far? Let me know below!