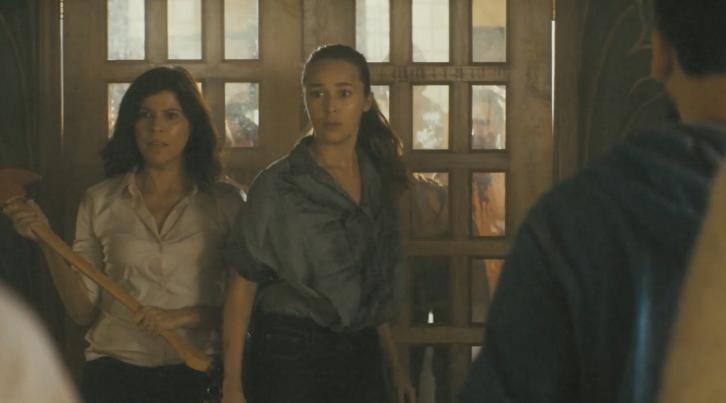 
Travis has a hard time connecting with Chris while looking for shelter; Alicia meets a woman with a bloody past.

Source:
AMC
ENTERTAINMENT WEEKLY: We start with this scene of Nick seeing someone from the community hesitantly but voluntarily allowing himself to be consumed by infected, and Luciana later explains to Nick that, “Those near death deliver themselves to death to join the wall and protect them.” How did you all come across this idea?

DAVE ERICKSON: It was an extension really of Celia’s philosophy, which is the dead have always been among us, the only difference now is we can see them. This was a neighborhood that existed, and for the most part, many of the people that we see in this community were already there. What they did was insulate it. What they did was create this dynamic where many of the friends and family who they lost in the immediate wake of the apocalypse were kept in one place.

So it’s this mutual relationship now where the dead protect them because the Colonia, as we’ll come to learn, is elevated. It’s sort of in the hills outside of Tijuana, there’s only one way in, one way out, and their dead protect them. Their dead form this barrier for the folks who may mean them harm; it becomes somewhat difficult for them to get access to the Colonia.

I think the living are also protecting the dead, and it becomes this slightly twisted, darker relationship, and it’s a nice contrast to the end last week. We ended last week in a very happy, joyful place where Nick feels he has arrived in a community that understands this new world, and what he comes to see moving into this week is that these people have embraced the world, but there are elements to it that are a little bit darker than he expected.