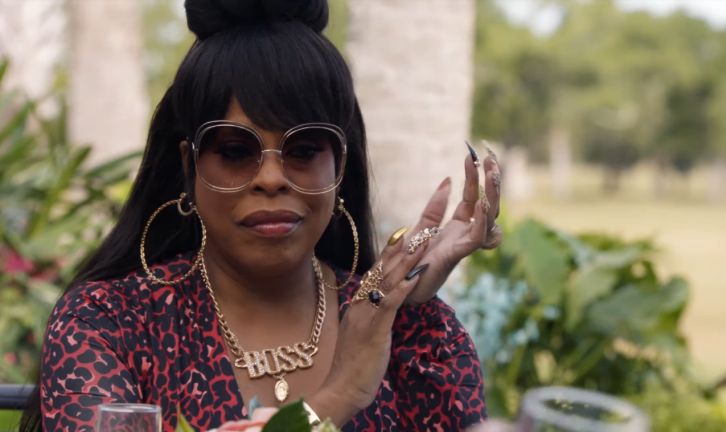 You might want to sink your “Claws” into me for missing a chunk of reviews this year (sorry about that!). But I wanted to check back in for the season finale – “Finna” – and see where it leaves the ladies of Palmetto as they head into an uncertain future (the show has currently not been renewed for a fourth season). It’s not quite as bonkers as finales past, but there’s definitely some stuff to discuss.

As the episode begins, it’s Desna’s birthday. And given how loved up she and Roller are as he brings her breakfast in bed and they quip about a honeymoon in Havana one day, you know things are going to go south fast. That downhill roll begins when Desna is summoned to a meeting with Benedict Liu. While his tone is calm as they talk, Desna is clearly rattled as her brain keeps spitting out macabre images from the season, like a bloody eyeball in her mimosa glass and Liu’s butter knife being replaced with a deadly-looking dagger. Liu has reached the conclusion that Desna and her crew don’t have “value” anymore, but she gets his attention by revealing that the future governor is in her pocket and that, in exchange for letting her and the girls run Bayside Rapture, she’ll get him to help Liu with his plan for three more casinos across the state. “So your ‘boss’ necklace isn’t just for show,” Liu remarks, impressed with her moxy. It’s a deal.

Easier said than done, though, as Desna needs Quiet Ann to put her brother and Liu together. Ann is apocalyptic that Desna would even ask her, after this enterprise already cost Arlene her life, to march her own brother into the lion’s den (and I’ll just say here that Judy Reyes does a phenomenal job playing Ann’s grief and rage throughout this episode). At first, it seems like Ann’s ready to let the chips fall where they may. But after a second talk with Desna where she insists that it’s the only way to stop more bloodshed by the Triad, Ann reluctantly agrees to set up the meeting. 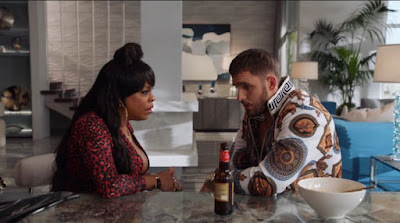 The second crisis of the season finale ends up stemming from the season premiere, as the cops storm the salon to arrest Roller for his cousin Clint’s murder. The evidence they’ve collected against him is pretty damning – in addition to testimony from a snitch (a.k.a. Toby), an eyebrow of his was found on the body. And Desna’s not in the clear either as they also recovered a hair of hers, though they haven’t matched it yet. So Desna suggests they make good on their earlier musings and flee the country, using her birthday party that night as a chance to say secret goodbyes to their loved ones. But having clocked their shifty behavior following Roller’s arrest (“I can smell a Husser lie from a mile away”) and gotten the real story out of them, Jenn forces Uncle Daddy and Bryce to confess the truth about the Clint/Toby situation. And because this is “Claws,” y’all, Uncle Daddy ends up thrown through Desna’s ornate birthday cake while Sister Sledge’s “We Are Family” plays on the soundtrack.

While furious about Toby’s betrayal (Desna: “I lent his ass my Costco card!”) and Uncle Daddy covering for him, it doesn’t change much about their current predicament. Recognizing that Desna’s not ready to spend her life on the run, Roller – in a selfless act of love – announces that he’s going to plead guilty to protect her. It’s a real testament to how far their relationship has come since figuratively and literally squeezing each other’s necks in the pilot. Despite this, Desna isn’t ready to give up on them being together. First, she orders Uncle Daddy to track down and take care of Toby, though he comes up empty (...or so he tells Desna. He does manage to find Toby (via Grindr, heh), but can’t bring himself to kill him, instead telling him to run. So I guess there’s a chance we’ll see Evan Daigle again. And hey, if you haven’t read SpoilerTV’s interview with Daigle, you should!). Moving on to plan B, Desna arranges a prison transport breakout and a boat to take them to Cuba. But when the moment comes, Desna can’t bring herself to leave Dean behind, and so the lovers part, promising to be together when it’s safe. What this means for Jack Kesy’s future on the show, I guess we’ll see.

But that’s not Desna’s only defeat as the season draws to a close. You see, while she was dealing with Roller’s predicament, a bitter Ann was commiserating with Joe – feeling squeezed out by Liu – about their crappy bosses. “They make you sacrifice everything,” Joe laments, “then take you for granted.” And so, instead of falling on their swords for their masters, they team up to burn it all down. Literally, dousing the casino in gasoline (bye, Bayside Rapture!) and locking Liu in an office to meet his maker in the flames. “So you destroyed it all?” a stunned Desna demands when she gets to the scene. “No,” Ann spits, “you did.” And that’s where we leave Desna – her romantic relationship severed, her friendship shattered, staring at the burning remains of her queendom. 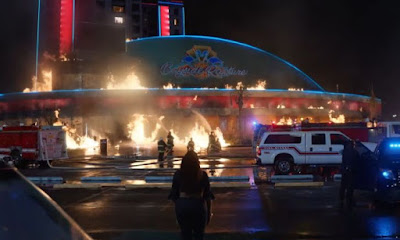 With Desna and Ann sucking up most of the plot oxygen, the other ladies don’t get a ton to do. Polly is distraught when Joe confirms that he’s married. Her devastation doubles when she declares that she’s not gonna be his “side piece ho” and forces him to choose and he decides to stick with his wife (who I wondered for a second might be someone we know, but it doesn’t come up again). Polly, natch, goes running to Ken, who’s super randomly hanging out in a skunk onesie with another lady friend. He, also natch, ditches her for Polly, but their status is still unclear when the episode ends. Meanwhile, Dean comes crawling back to Virginia, apologetic that he let his mahjong addiction get in the way of their relationship. Virginia takes him back at first, but some girl talk in the salon gets her thinking and she decides she needs some time to be by herself, disappointing Dean. And outside of exposing Uncle Daddy’s secret, Jenn gets a great moment when, not allowed to accompany Desna into her meeting with Liu, she gets right up in his bodyguard’s face and starts loudly cracking her knuckles.

Well that’s a wrap on season three of “Claws!” How did you think “Finna” compared to past season finales? And where would you like to see Desna and her crew go next if the show gets picked up for another year? Come share your suggestions and speculations in the comments section.