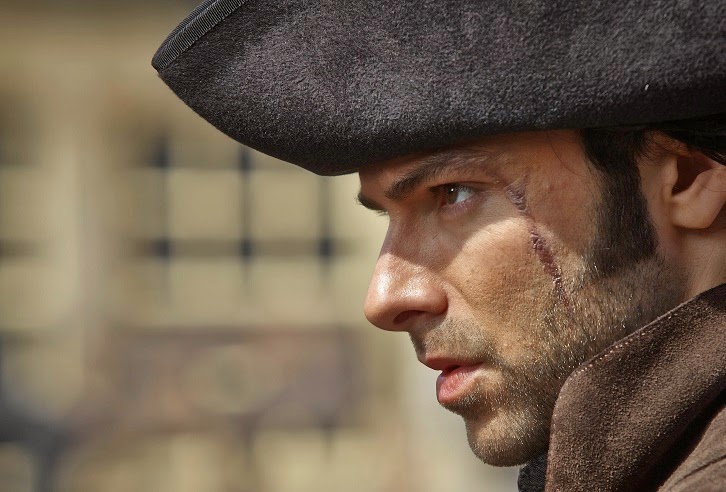 The first episode in this eight part adaptation of the first two of Winston Graham's Poldark novels set in 18th century Cornwall starts next weekend on BBC One. So here is our Episode Info & Video thread to accompany the series. All new information for each episode will be added here as it becomes available, if you come across anything that has not yet been added then please use the button below and send it to us so we can update the post.

If you would like to join in the discussions and speculation in the comments, scroll down to the very bottom of the page and click the subscribe button so that it turns green. Then you will be emailed whenever anyone posts new information and can follow a link directly to that comment and reply. We'd love to hear your thoughts, so please don't be shy!

Renewed for a 2nd Season
BBC One’s returning drama series have been on exceptional form: Last Tango In Halifax, Silent Witness and Death In Paradise have all been their most successful series ever to date; while Call the Midwife is the most watched drama series of the year so far across all channels. This quarter also saw BBC One successfully launch new factual titles Eat Well For Less and the ‘Truth About…’ strand. While Poldark has been BBC One’s new Sunday night hit series, which has just been commissioned for a second series.

Charlotte Moore, Controller of BBC One, says: “It's been an outstanding start to the year for programme-makers on the channel and their ambition has been in evidence throughout. I’ve been proud to watch a BBC One at the top of its game, bursting with creativity and modernity, which has brought the nation together and sparked the national conversation.

"I want to make sure viewers feel BBC One is part of their lives and that’s about making sure there is something on BBC One for everybody. We aim to maintain that momentum and continue to move with the times and bring audiences a range of distinctive, high-quality programmes that feel relevant and reflect the diversity of modern Britain. It’s exciting to see BBC One being recognised today as the most nominated channel in this year’s BAFTA TV Awards. I can also exclusively announce that Sunday’s night new phenomenon Poldark that has captured the nations’ hearts has been commissioned for a second series. Aidan Turner will return as Ross Poldark and Eleanor Tomlinson as Demelza in a new eight-part series written by Debbie Horsfield that will cover books three and four of Winston Graham’s series.”

Britain is in the grip of a turbulent crisis... falling wages, rising prices, civil unrest - only the bankers are smiling. It's 1783 and Ross Poldark returns from the American War of Independence to his beloved Cornwall to find his world in ruins.

This is an eight-part adaptation of the first two novels in Winston Graham's Poldark series.

Winston Graham wrote 12 Poldark novels starting with Ross Poldark in 1945 and ending with Bella Poldark in 2002. The internationally bestselling novels are set in Cornwall where Graham spent much of his life.

Robin Ellis, who played Ross in the first television adaptation of the Poldark novels in the 1970s, will be joining the cast for two episodes to play Reverend Halse.

Read more on the link

Ross Poldark (Aidan Turner) joins the army to avoid charges of smuggling. He goes to fight in the American War of Independence, leaving behind his sweetheart, Elizabeth (Heida Reed), with the promise that he will return soon. Three years later, wounded and scarred, Ross returns home to discover that his father has died, his estate is in ruins and Elizabeth is set to marry his cousin Francis (Kyle Soller).

Elizabeth and Francis are married. Ross is surprised to see that callous banker George Warleggan (Jack Farthing) is at the groom's side. Ross’s uncle, Charles Poldark (Warren Clarke) thinks that it would be better for the newlyweds if Ross were to leave Cornwall and he offers to pay for Ross to make a fresh start elsewhere.

Ross stubbornly refuses, determined to rebuild his family estate, Nampara. With only the help of his father’s useless servants, Jud and Prudie (Phil Davies and Beatie Edney), Ross takes on a new kitchen-maid, Demelza (Eleanor Tomlinson), after he rescues her from a beating.

When the local mine Wheal Reath is closed, hundreds of miners, including Jim (Alexander Arnold), find themselves out of work and desperately poor. Ross (Aidan Turner), having repaired the family home of Nampara, now employs Jim as a farm-hand, and thinks to resurrect his family’s mine (Wheal Leisure) with the hope of bringing prosperity to the area again.

Meanwhile, Verity (Ruby Bentall) asks Ross to accompany her to a ball at the Assembly Rooms, where she meets and falls in love with Captain Andrew Blamey (Richard Harrington). However, Blamey is hiding a dark secret that Verity's brother Francis (Kyle Soller) and father Charles (Warren Clarke) are horrified to discover.

But it is Ross' intimate dance with Elizabeth (Heida Reed) that causes a stir at the ball and gives the other guests a reason to gossip.

Elizabeth gives birth and Ross puts on a brave face at the christening, where he is angered to hear people gossiping about his relationship with Demelza.

Zacky reveals his daughter Jinny has fallen pregnant to Jim, so Ross offers the young couple a cottage rent-free so they can marry. However, their future is put in doubt when Jim is caught poaching and brought before the local magistrate (played by Robin Ellis).

News of the marriage between Ross (Aidan Turner) and Demelza (Eleanor Tomlinson) shocks Trenwith - with Charles' (Warren Clarke) amusement at the union bringing on a fatal heart attack. On his death-bed he asks Ross to look after Francis (Kyle Soller) who is drinking, gaming and whoring his family’s money away.

Verity visits Nampara and despite Demelza’s worry that she is too common for Verity (Ruby Bentall), the two quickly become firm friends, and Verity teaches Demelza how to be a refined lady.

Wheal Leisure has still not hit copper and the money is running out. Ross turns to his investors, but finds they are unwilling to throw away good money after bad. They must hit copper soon or Wheal Leisure will have to close after Christmas.

Francis and Elizabeth invite Ross and Demelza to Trenwith for Christmas. Demelza is welcomed into the Trenwith Poldarks and appraised by Aunt Agatha (Caroline Blakiston), who never minces her words.

At Julia’s christening, Demelza (Eleanor Tomlinson) resolves to lift Verity’s spirits by reconciling her with her lost love Captain Blamey (Richard Harrington). Meanwhile, Mark Daniel (Matthew Wilson) has fallen in love with the capricious Keren (Sabrina Bartlett), who demands he find her a home before they are married. Ross helps Mark renovate one of his dilapidated cottages.

Ross sets about forming an alliance with other mine owners to build their own smelting company and break the Warleggan stranglehold that is driving copper prices ever lower. However, as Francis (Kyle Soller) is deeply in debt to George (Jack Farthing), he cannot join the venture. Deeply unhappy with his marriage to Elizabeth, Francis is spending what money he has left on lavish gifts for an ambitious prostitute, Margaret (Crystal Leaity).

Francis also secures Ross an invitation to George’s house party, a seedy affair of drinking, gaming and whoring. With Ross at the party, Demelza lures Verity (Ruby Bentall) into a trap designed to reconcile her with Captain Blamey.

The Carnmore smelting company is a success and Ross (Aidan Turner) makes more of an enemy of George (Jack Farthing) by outbidding him for copper at auction. Meanwhile, Francis (Kyle Soller) is increasingly volatile now that he has lost his mine and is reduced to working the land, so Verity (Ruby Bentall) avoids speaking to him about her plans to marry Captain Blamey (Richard Harrington).

When Ross and Zacky (Tristan Sturrock) discover there is fever at Bodmin Jail just weeks before Jim (Alexander Arnold) is to be released, Ross asks Dwight (Luke Norris) to accompany him to the prison. Ross forces his way into the jail and discovers that Jim is near death. They break Jim out from the jail in a desperate attempt to save him.

Returning home, Ross is expected to attend George’s grand ball. He is sickened at the thought of going amongst the people responsible for Jim’s incarceration, but Verity persuades him that he must do it for Demelza and Julia’s sake; to remind everyone that he is one of their class so they won’t arrest him for the prison break. However, at the ball Ross is fighting drunk and Demelza is aghast that she has been left to fend for herself at her first ever high society social event.

Ross is struggling to keep the Carnmore smelting company afloat - and George Warleggan is determined to crush it. George’s agents are outbidding Carnmore in order to starve it of copper and George is trying to find ways to get to its shareholders, who all remain secret except Ross.

After a rockfall at Wheal Leisure Mark returns home early and finds that Keren is not there. He tracks her to Dwight's house and discovers that they have been sleeping together.

When Verity runs away with Captain Blamey, Francis immediately blames Ross for helping to arrange the scandalous elopement. Ross is furious and denies any involvement, but Francis will not listen and the cousins break irreconcilably. George sees an opportunity and exploits Francis’ anger until he reveals the names of the Carnmore shareholders.

Demelza heads to Trenwith to confess to Francis and beg him to forgive Ross, but Francis flies into a rage and throws her out.

Ross (Aidan Turner) tries one last time to turn around the fortunes of Carnmore, but when he is outbid he reluctantly folds the company. George (Jack Farthing) has won and takes the opportunity to rub his face in it, showing off his new ship, the Queen Charlotte.

Consumed with guilt over Keren’s death, Dwight (Luke Norris) throws himself into work, dealing with an outbreak of the putrid throat. When Ross learns that all at Trenwith are stricken with the disease he tries to persuade Dwight to see them - but they are Doctor Choake’s patients. Despite the estrangement Demelza rushes to their aid, but becomes infected and passes it on to baby Julia.

Ross is cheered to see George’s new ship being wrecked upon the rocks and leads the local poor, many of whom are starving, in looting the contents of the ship and exacting his revenge upon George.

Where there’s love, there’s hope. #Poldark will return for a second series... pic.twitter.com/bnkx8cPtJ7

The Radio Times have some spoilers from the third and fourth books of what's to come in Season 2 if you haven't read them as yet. Click here if you would like to see them. They also include a list of what they'd like to see more of next year. Do you agree with their picks, what would you like to see more of in S2?

The BBC Writer's Room has an interview with Debbie Horsfield talking about how she adapted the novels for the show. You can find the interview by clicking here. They also caught up with her to ask what will be coming up in S2, which can be found here.


About the Author - Sandi

Sandi is part of the Senior Staff at SpoilerTV having been a contributor from back in the Lost days of DarkUFO, and who now writes previews for Banshee, The Musketeers, Poldark, and other BBC shows. She also enjoys watching and commenting on other shows such as Reign, Hannibal, Game of Thrones and Elementary.
Recent Reviews & Articles (All Reviews)