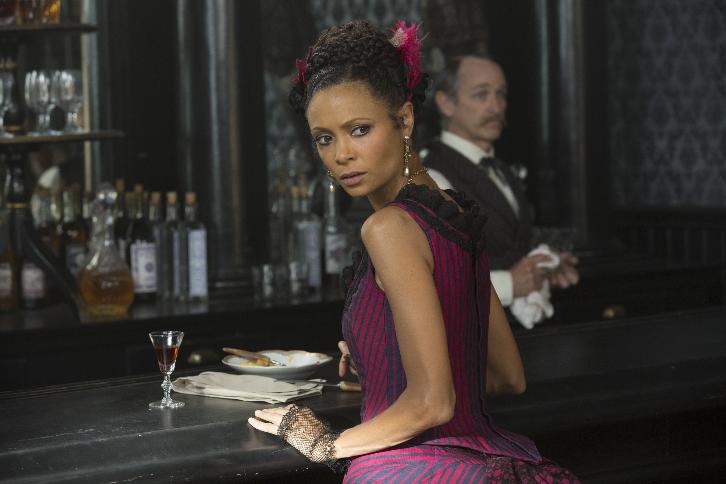 
Right. Because you’ve previously said the film’s events did not literally happen in your story. Later on, I loved this replica of Ford’s family hanging out in this hidden house, it seems like very weird therapy for him.

Nolan: We liked the idea that if you had the power to make people that you might indulge that in whimsical and weird ways. The show is very much about that god-like power.

Lisa Joy: It also speaks to Ford’s character. He’s been here so long, he’s seen employees come and go, and friends come and go, and he doesn’t seem to have that much family life. Yet this family that was created for him is like a perfect time capsule — a strange, disturbing time capsule. In a weird way, his sense of company is his former self. And the weird things that must occur… if you could talk to a simulation of yourself as a child, what are the things you would say? Would it change you now? Would that change the child? It’s that fractal-like effect of looking at yourself through a different time.

Elsie breaks every horror movie rule and goes into the dark creepy abandoned theater alone. How worried should we be about her?

Joy: I love Elsie’s character and I’m also worried about her character. She’s been fearless and asking questions she shouldn’t ask that are the exact ones I would ask in that situation. I’m hopeful she’s okay but worried she’s not.

Source:
Read More on EW
It's a great moment for the show, too. The promise of Westworld is that many if not all of the hosts are on a journey of self-discovery. We've seen several hosts inch forward along that path, most notably Dolores (Evan Rachel Wood). Here, Maeve gets to see fully behind the curtain, to fully know the nature of her reality. From a creative standpoint, what was the most exciting aspect of getting to bring a host this close to reality for the first time on the show?

First of all, I felt so completely gifted and blessed to have the opportunity to present this emotional component to the show. I felt as though, as you said, the promise of the show is from the hosts' point of view. What is their world? And what is our world, ultimately, which is what we ask ourselves when we watch it? Who is our maker? I knew when I read episode six that this component of what it would be like to discover the machine, and the machine that creates us. That component was most exciting to me. I'm of course a huge fan of the Western genre. John Ford is a hero of mine and I've studied his films, and conversely, the Stanley Kubrick element of the show — when we're in the laboratory, I knew concretely, and with Jonah and Lisa's blessing, that we were presenting a Kubrickian view of the world, which is very austere and cold in some ways. But the emotional component playing against that was going to be the part that would be so powerful. I knew going into it that the part I could really invest in was the dramatic aspect of it. I would have a ton of fun with the Western genre and elements, but going into the episode, it was her journey that truly drove me towards the execution of this episode.

The episode also reveals that Robert Ford has host versions of his family members housed away in a quiet corner of the park. It's very humanizing on one level. This is a man who said two episodes ago that he's not "the sentimental type." But he's sentimental enough to have been maintaining this host version of his family for all of these years. But it's also unsettling in another way. What were your goals for this scene?

In addition to the hosts, presenting Doctor Ford's reality is a critical component of the believability of this story. As the world expands around us and we learn more and more about what this creation is, you start to look to the creator. I've always looked at Ford as the creator, the foundation. To me, his world and his reality is everything to my fundamental understanding of what the philosophy of this show is. So going into this, we had an opportunity to see the sentiment that he's preserved over all these years, and to see this family. There had to be an innocent quality to it. With Dolores being the first host and these figures being some of the oldest in the park, I think you needed to see that there was an innocence in a way — an idealism that was part of the fundamental creation of Westworld when it was first thought of, that the darkness of humanity is not what they were going for or looking for. That's how I've interpreted it, that there was a certain amount of innocence on the part of Robert and Arnold when they went into it. Arnold, of course, was the coder and mastermind behind the idea of awakening the hosts as sentient beings, as Ford presents it in episode three. So my thought was, how do you present this reality for Ford that's very innocent? Going into the house and seeing the father, and you see the greyhound for the first time. There's this lovely moment where Tony puts his hand on Robert's brother's head. I remember that. I remember him asking me, "Fred, I have a question for you: I really feel as though I want to connect with my family." I wasn't quite sure where he was going with it. And then I saw him gently put his hand on the boy's head, and I realized that it was so important for him to present to us where his emotional life lived — and that it's Arnold, right? That's the other component. This is a creation from the two of them. That was very important.

You directed next week's seventh episode. What can you say about what's coming up next?

I think episode seven is a huge game changer in terms of the story. I think a lot of the reality that we're seeing is brought to clarity. It brings a whole new perspective on what we've been watching for these past six episodes. I think we reveal a lot of information that will make this show incredibly rewarding moving forward. For me, it's a very powerful chapter.