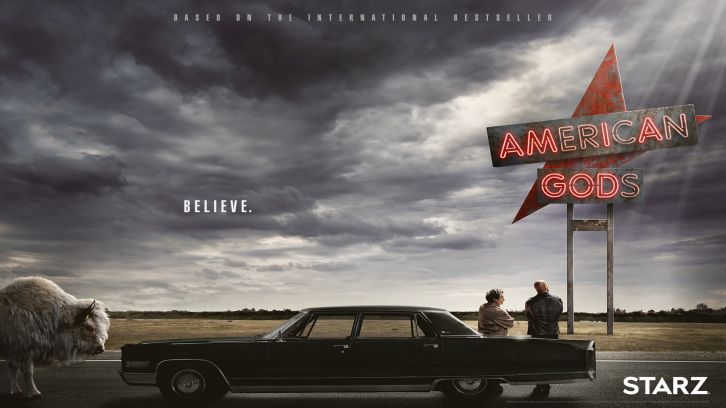 "A Murder of Gods", like every other episode, starts with some context that throws you in the loop of what the episode's theme will be about. In this case we follow the life of a group of Latinos trying to cross a border when they get killed by men carrying guns. Both groups are ruled by religion, catholic or at least christian (because of the symbols on screen), it doesn't really matter after all, because even if the ones firing the guns have Jesus in front of them, he's in the wrong side of the fire.
This opening sequence is the most obvious up to date, into giving some sort of an idea to the audience. The rest of the episode follows the aftermath of Shadow and Mr Wednesday trying to gain followers into their war, and the encounter with Vulcan. Old God of fire, now turned into a businessman of the bullet industry and mayor of a town heavily armed.

Before arriving to Vulcan's town, Shadows shows symptoms of being more hurt than it seems, something looking like the root of a tree is growing inside's the scar he got from the fight with what the new gods left behind in the police station. Mr Wednesday takes care of it and they keep going. At the motel Shadow explains about the importance for him of the meeting with Laura, but they have to take off, and Mr Wednesday, even if he sees her running after them, doesn't say a thing about it. Finally they arrive to Vulcan's town, a place where guns are worshiped, even more than life of human beings.

Vulcan doesn't seem to like Shadow but his relationship with Mr Wednesday dates of old times, so old we can't really measure it. Another clue into how old Mr Wednesday really is.
This liaison works for the protagonist because even if something is off, and the fact that human sacrifices are made to keep what happens in the town going, Vulcan promises him to forge a sword for him. When they go into the factory, Mr Wednesday raises against Vulcan and throws him into his demise.

Meanwhile Laura and Mad Sweeney find an alley in Salim and are on their own roadtrip to meet Shadow again. Maybe next week we'll find out if this happens or not.