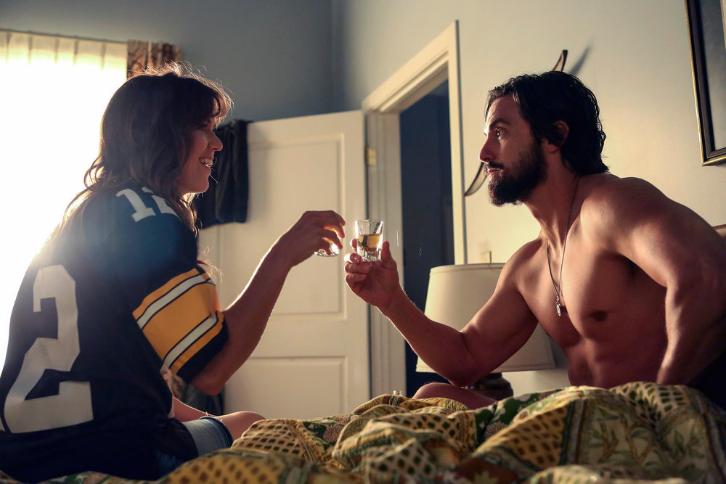 10/25/2016  (09:00PM - 10:00PM) (Tuesday):  Rebecca and Jack get into an argument about starting a family. The family backstory behind the long line of love for the Pittsburg Steelers is revealed. After accepting his part in the play, Kevin realizes his script is relevant to his own life. Randall and Beth encounter an unexpected turn of events.


ENTERTAINMENT WEEKLY: This is an ambitious episode in that you are juggling so many story lines, but it’s rewarding to get actual stories in the past. Will this be something we’ll see even more of in the future, where an episode explores a relevant story for each of the Big Three as kids, in addition to their present-day adventures?

DAN FOGELMAN: Yeah, I think it’s definitely something that we’re going to be doing in episodes in the future, where each of the kids has a little story that is reflecting on their present-day story. The difficulty is within an hour of storytelling, you can only really do the stories when all of the kids are in the same location, otherwise we’re suddenly telling 15 different stories in the course of 42 minutes of television. So the pool is obviously a very natural place to be able to do little stories of all the people, because they’re all in the same area. For a future story, we’re talking about examining what birthday parties are like in this house for the three kids, in terms of: How do you do a birthday party when three kids all share the same birthday without it getting out of control and ridiculously expensive and too many kids? So, that feels like another area to give each of the kids their own little story that’s reflecting on their present-day adult story, too.

From the moment Randall apologizes for William’s run-in with the neighborhood security guard, Randall is defensive with William about his upbringing and the life he’s created for his family —and he seems to assign judgment from William that wasn’t there ultimately. Did you set out to explore the idea of Randall realizing that actually he is enough to William while solidifying their father-son bond?

Race obviously plays a big part in Randall’s life and his story, and we haven’t explored it in depth yet, but I was thinking initially: It’s an interesting thing for a guy to be suddenly confronted by this living issue in his life and now William is living in his home, so he’s feeling his eyes on him in a way that might not be necessarily happening, because he’s reflecting what’s going on in his own brain. That was kind of the starting place for the entire thing. They’ve lived these two very different lives — William’s life and Randall’s life have been very different — and I think when you get to the end of the episode, you realize that a lot of what Randall has actually been acting out against isn’t quite the racial aspect of the story, but it’s the fact that he learned early in the story that his father was out and healthy around the very same time that he was struggling with these issues as a little boy. And I think that’s where his story is stemming from and not just, “I was a black child raised by a white family and that was very difficult for me and you did that to me.” So they’re both having almost two different stories that are internal versus the one that you actually think is happening.