SEAL Team is basically a workplace drama set in the world of America’s Special Forces. I was a fan of The Unit, also on CBS, and am currently reading a lot of books in this genre so I was primed to like this show and I did like it, but putting on my reviewer’s hat the best grade I can give it is a C-. 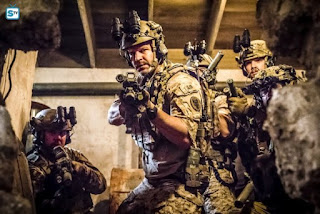 This isn’t one of those rare pilots that feels like it’s been sitting in someone’s drawer being polished to perfection year after year. It's much too paint-by-numbers to make any kind of lasting impression on the viewer.

The writer has a good sense of the action stories that they want to tell, though the intensity level of the action sequences feels like they are patterned more after reality than after a block buster action movie. That may not be everyone’s cup of tea but it worked for me.

What didn’t work were the character stories. The major characters are all stock characters that we’ve seen far too often.

There’s the highly experienced and respected veteran with PTSD, the family man, the new guy that no one wants to give a chance and the estranged spouse who still loves her man but left him because she can’t live the life of a military spouse any longer. 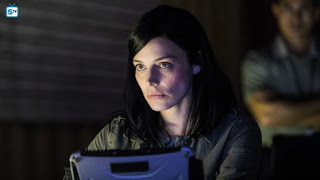 This might have been okay if the writer had been able to add something new to these characters; something to make them interesting. But they let the opportunity pass.

The closest the script came was the only character cast against stereotype: the female CIA analyst.

She has a nice moment where she confronts the fact that she was cold-blooded enough to ask her superiors to let an American hostage languish in Hell so that she could capture the terrorist she’s been chasing for quite some time.

A lot of shows make it on the air with a mediocre or horrible pilot. I don’t consider that a deal breaker. Before the days of 10 and 12 episode seasons, I’d give a show six episodes to work out the kinks and fix any problems with characters or stories.

I still try to give shows time to grow, but these days it seems like if a show doesn’t increase it's audience immediately it’s canceled.

Hopefully, Episode 2 will show some improvement in the writing. I did enjoy what this pilot and I am definitely going to keep watching.

What about you? Did you see enough to make you want to give the show a chance?